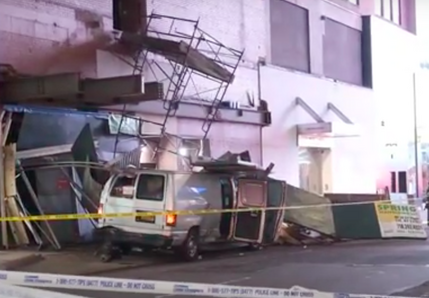 Last night a 30 year old homeless man from Maryland, Jaquan Brown harmed and altered several lives. At approximately 5:30 a.m. Saturday morning a shirtless Jaquan Brown, ran into the McDonald’s on West 45th Street and Broadway, stating someone was shooting at him. Security brought Brown to the curb, where a bakery van was delivering their wares. A 15 year old boy was in the passanger seat. Brown jumped into the van, when the driver went to deliver. The driver grabbed the vehicle’s door, but Brown pushed him, took off and proceeded to crashed it into nearby scaffolding.

Michael DellaPolla the owner of Gian Piero Bakery in Queens was hit with a triple whammy. First, his freshly baked bread still needed to be delivered. Second his van was crashed by a man who most likely has no money and even if he did the likelihood of his seeing that is unlikely. Mr. DellaPolla was just finely getting on his feet after the pandemic. Third his delivery driver was left with two broken legs and a broken hand. Sadly the man has a new baby on the way and a family to feed. The 15 year-old who was his son, was also taken to the hospital.

And where was deBlasio on all this? How did this man get to NYC from Maryland if he is homeless? He is now racking up bills in our hospital. Will he be jailed? He is charged with nine charges, including robbery, assault and grand larceny. Most likely Brown will be let go as we no longer punish criminals.

This is not the first carjacking in Times Square. Carjacking is on the rise especially in apartment parking garages. Mayor Bill de Blasio seems almost blasé about this crisis as his final year in office continues. And nobody will state the obvious at whose to blame and who is committing these crimes.

Times Square is no longer full of theatre goers and and tourists, but the homeless sleeping in boxes.

I am asking all my readers if you can go support Gian Piero Bakery in Queens please do so.