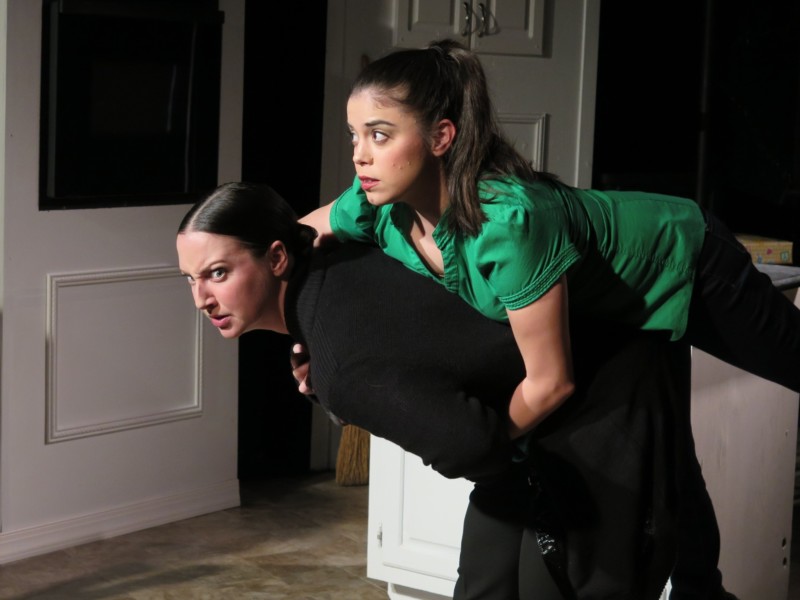 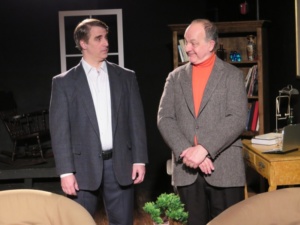 On the cover of the program for Shelli Pentimall Bookler’s play, All the Dead Biddles, it states that “Underbite Theatre Company and Plays and Players present a new dark comedy”. And though in conversation with the playwright, she has assured me that indeed she wrote a black comedy, that is not how the piece is presented in this particular production.   However, though not comedic, it is indeed new and dark and completely intriguing. 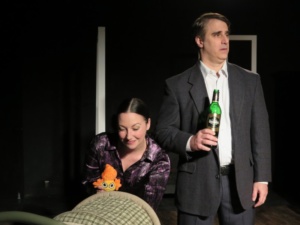 The play deals with Wendy, a middle-aged woman who cannot cope with the recent loss of her infant son. In the first scene we see her wheel on a baby stroller with a doll whose insides contain a recording of a child’s laughter. She treats this doll as if it were her dead son, Alex, much to the dismay of her frustrated husband, Karl. Invoking the help of Dr. Francis, a psychologist, Karl yearns to find a way he can bring his wife to accept their son’s death. But Dr. Francis only suggests unconventional methods for dealing with their loss. And Inez, the live-in nanny hired to help with the baby, treats the doll as if it were the real child – feeding him, cleaning him, holding him – per Wendy’s insistent demands. 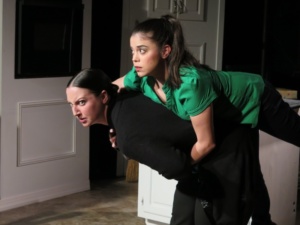 Anthony Marsala is very engaging as Karl, a husband who is at his wits end. Feeling abandoned by Wendy, who won’t even allow him to touch her, he implores the doctor for an effective method to wean her away from the surrogate child she has created. But Dr. Francis, amusingly played by Barry Gomolka, insists that the doll can be a representative love object and an efficacious way for Wendy to mourn her dead boy. Colleen Corcoran is quite frightening as the implacable, delusional mater who defends her Alex (the doll she carries around) like a wounded mother bear and Marisol Custodio is sweet and malleable as she ingratiatingly bends to the will of both Wendy and Karl.

The one misstep is this production, unfortunately, is directorial. Ms. Bookler’s play is reminiscent of the works of the short lived, British playwright, Joe Orton (“Entertaining Mr. Sloane”, “Loot”) where characters commit unspeakable acts as a matter of course. The text, which is rich with quoted poetry does sparkle with glints of jokes that as of yet need to be unearthed and polished. Were we laughing more throughout the play we would not find the ending so absurdly surreal, but rather the natural and inevitable outcome for these flawed characters.

Underbite Theatre Company and Plays and Players present a new and dark comedy, “All the Dead Biddles” written by Shelli Pentimall Bookler

Suzanna BowlingOctober 20, 2020
Read More
Scroll for more
Tap
The Pierre Hotel Celebrates with the Best Of Broadway
Renaissance in a Musical Production Brimming with Contagious Energy