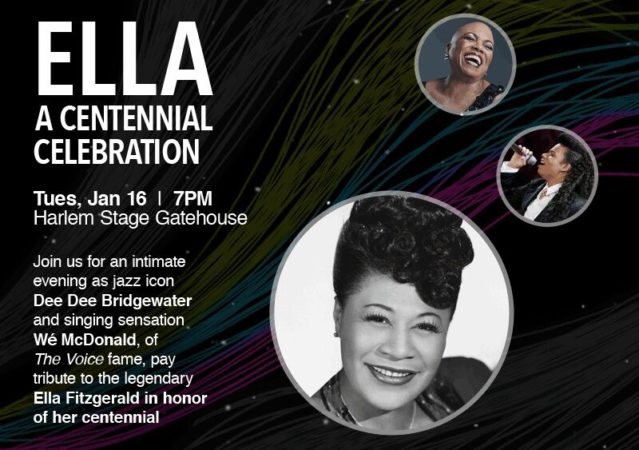 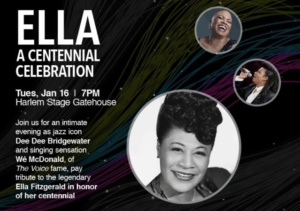 On January 16, 2018 at 7:00pm, join Harlem Stage — the legendary uptown venue that for over 30 years has been promoting the creative legacy of Harlem and artists of color — for a special winter benefit performance that will honor the life and work of Ella Fitzgerald. This intimate evening will feature jazz icon Dee Dee Bridgewater and singing sensation Wé McDonald, of The Voice fame, as they pay tribute to the legendary Ella Fitzgerald in honor of her centennial. In the spirit of the best traditions in jazz, both of these artists will perform their own inimitable interpretations of the songs made famous by Ella.

Over the course of a multifaceted career spanning four decades, Grammy and Tony Award-winning Jazz giant Dee Dee Bridgewater has ascended to the upper echelon of vocalists, putting her unique spin on standards, as well as taking intrepid leaps of faith in re-envisioning jazz classics. Ever the fearless voyager, explorer, pioneer and keeper of tradition, the three-time Grammy-winner most recently won the Grammy for Best Jazz Vocal Album for Eleanora Fagan (1915-1959): To Billie With Love From Dee Dee. Bridgewater’s career has always bridged musical genres. She earned her first professional experience as a member of the legendary Thad Jones/Mel Louis Big Band, and throughout the 70’s she performed with such jazz notables as Max Roach, Sonny Rollins, Dexter Gordon and Dizzy Gillespie.  Releasing a series of critically-acclaimed CD’s, all but one, including her wildly successful double Grammy Award-winning tribute to Ella Fitzgerald, Dear Ella – have received Grammy nominations. Her newest CD “Memphis…Yes, I’m Ready” was released in September 2017.

Wé McDonald is a Harlem native, who grew up taking vocal lessons at Harlem School of the Arts. She has performed at The Apollo and was a contestant on The Voice, where she received much acclaim from the judges and audience. McDonald credits the late singer Etta James as one of her biggest influences along with Ella Fitzgerald, Nina Simone, Janice Joplin and Billie Holiday. In 2017, Wé McDonald was the recipient of the inaugural Harlem Stage Emerging Artist Award.

Tickets and reservations to Harlem Stage can be purchased online at www.HarlemStage.org, or via phone at 212.281.9240 ext. 19. All performances take place at the Harlem Stage Gatehouse (150 Convent Avenue at West 135th Street, Manhattan).

Suzanna BowlingJanuary 23, 2021
Read More
Scroll for more
Tap
Who We Said Good-Bye To In 2017
Broadway’s James Monroe Iglehart and Capathia Jenkins Give Heart and Soul To The New York Pops