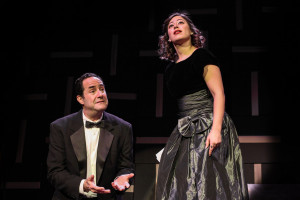 Making Spring Time for Hitler look like a masterpiece Defendant Maurice Chevalier, is two and half hours, I will never get back. Written by Alexis Chevalier, the grandson of the late great Maurice Chevalier, this young man is exploiting and capitalizing on his birth. He is neither a playwright nor an actor. Earlier in his career, in a workshop production at his acting school, he played his grandfather. One of the most ridiculous parts of the play is when the playwright states Irving Thalberg let Chevalier out of his contract, out of a good heart. No way, there was a dispute and it is even written about, so the playwright did not even do his homework. To make matters worse the play is laden with ridiculous fantasies that make no sense and musical and dance sequences, when this is not the cast who can move. Add numerous scenes (51) that are repetitive and you can understand why this is a must miss.

The cast is not horrible per say, they just don’t have any charisma, so we felt nothing. The original Chevalier oozed charm; he had a lilt to his voice and a heavy French accent with a guttural purr. Ken Straus in the title role has the laid back quality, but his voice is week, his dancing stiff, the accent is in and out, mostly out and he is not an actor.

The show tries to cover Maurice Chevalier (1888-1972) life. Chevalier was extremely popular in cabaret, concerts, Broadway and films. He was nominated for an Academy Award as Best Actor in 1930, and received an honorary Oscar for his role in Gigi in 1958. After a dispute with Irving Thalberg over billing, he left Hollywood in 1935, and returned to France as the rumors of Hitler were beginning.  In 1937, he married the much younger Jewish performer Nita Raya (Deanna Jelardi). During the German Occupation he starred in revues becoming popular with the Germans. His wife was in hidden in unoccupied France. His performance in a German prison camp for French prisoners of war later led to charges of treasonous collaboration. Seen through a series of flashbacks, Chevalier (Straus) tells his story.

The only scene that works is the one when German Major Steinsteiger (Ben Rademacher) breaks down about losing his wife and son and that is because this is the one actor who can actually act.

Deanna Jelardi is youthful, sings with a decent if week voice and can dance, but ironically is stiff when not dancing.

Sam Schall as Chevalier’s accompanist can at least play the piano well.

Director Alex Notkin did not know when to tell his writer to cut and has indulged this production with so many set changes that they in themselves become scenes.

The choreography by Elena Notkina and Inna Muratova was passable, but useless and made no sense.

Maurice Chevalier, was a wonderful performer, but as you can see in the video. This show is more of self gratification piece that uses the audience as their extremity.