Delejos (from afar) Jumps Emotionally from Real to Virtual, Hoping to Win through Connection 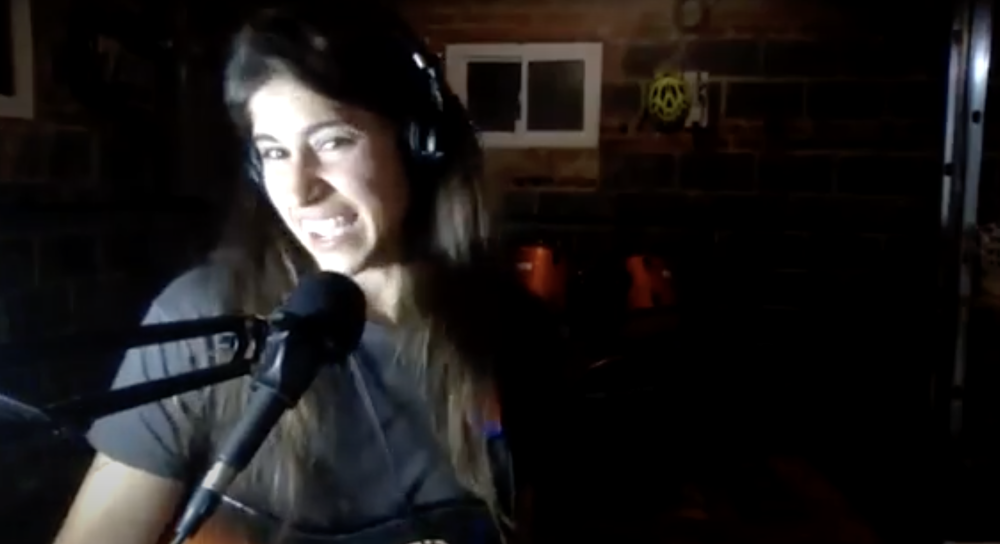 Delejos (from afar) Jumps Emotionally from Real to Virtual, Hoping to Win through Connection

Delejos (from afar) is in a theatrical world all to itself, and in this neverending lockdown reality, this is high praise. In simplistic terms, this Zoomed production is a one-woman, immersive, multi-media, live play unearthing and unpacking themes surrounding grief, connection, virtual reality, love, creativity, and Latinx identity. In more complex terms, the production is a powerful examination of ‘magical’ and emotional thinking, coupled with symbolic significances that emanate from deep inside an overpowering sense of grief and loss. But instead of discarding or disowning it, as most might want to do, the intelligent and daring NYC-based artist Julie Piñero embraces and believes in all of its transforming beauty and engagement. And that only sorta gets to the core of what’s being done here.

The play is an outpouring of creative engineering and energy, created, written, and performed by Piñero as a way to unleash, through investigation, the pain that fills her up when her newly discovered lover and partner Jose Zambrano suddenly dies after becoming the victim of random street violence in NYC. Heartbreakingly tender and intricate, Piñero tells us the sad tale, transforming and expanding her painful emotional landscape by weaving together stand-up comedy, live music and VR. It’s quite the intoxicating delivery, especially in its wild abandonment of standardized form and structure. She does this, she tells us, because these were the mediums she and Zambrano pursued together. In essence, this is her way of continuing their journey together and hopefully finding peace and salvation. The emotionally heightened product turns that magic and hurt into something unbelievably connecting, thought-provoking, and thoroughly engaging, discovering a new way to uplift the emotional landscape “with the gusto of a game designer.“

It’s grief poetry wrapped in performance art, begging to be explored and known by one and all. The piece takes me back to those wonderful East Village nights when we would gather together in a dim lit East Village bar to listen to a friend of a friend’s written word art born out of personal heartache and love. It rings with that complicated but simple artistic beauty, as Piñero, through the examination of Zambrano’s unfinished passion project, the virtual reality game named “Delejos“, nimbly finds her way through the complicated landscape of love, loss, and (de)attachment. She unpacks her new painridden existence at the bedside of a comatose Jose, while finding alignment and solidarity with Jose (and family) in a remarkably similar way to what Zambrano had planned for his players to do. He had miraculously envisioned his virtual game as an explorative pathway through an array of fascinatingly created realities, inspired by his own forced immigration from Venezuela (which, to be honest, feels more like fleeing). The players must find a way to win the fever-dream game by coming together and building a bridge of love and connection. It’s a beautiful concoction, what Zambrano had planned, and Piñero uplifts this modality into her Zoomed theatrical pursuit of FLOW. She searches for her own true self, “like a lost pair of keys“, using his idea of adventures to build (or rebuild) our sense of home and find the energy to bridge the distance between people, cultures, communities and language.

Piñero discovers utter uniqueness in her approach, utilizing the platform of streamed theatre in a remarkably straightforward but novel way that is both interactive and compellingly original. It feels obvious but alarmingly different and creative, as we watch her struggle to make sense of loss, within the context of today’s COVID world, funneling her curiosity into the question: “do we lose something simply because we’re far from it?” It’s a captivatingly intimate Alchemist harnessing of destruction and creation that isn’t quite translatable. Leaving Piñero to ask the impossible question: “Why? Why?” Why are there no answers to the Bitter End?

With eyes wide shut for moments at a time, the intersection of romantic heartfelt love and creative communal partnership found inside of grief and love is communicated with intense ease layering in a vulnerable intimate edge that registers far more than you ever see coming. It’s impossible not to fall for the wide eyed beauty of Jose, especially through Piñero’s eyes. But why would you fight this beauty, even as sadness overwhelms during all those moments of honesty and clarity.

“Before this project, I would always doubt my own work. It’s why I’ve dabbled in so many mediums: too scared to hear my own voice within one, I jump to the next.” says Piñero. She states that she has “impostor syndrome” when performing, but somewhere inside this tender creation, one that she feels has been spiritually “Written by Julie Piñero and Jose Zambrano”, the promise and the realization of “I love you” (at 9% power) wins in the end. She has something important to say, and she has learned to just say it with passion and creativity. For that, we can only melt into her arms, feeling more alive for the experience, and thankful for our introduction into Delejos (from afar).

Produced by Caitlin Stone, Delejos (from afar) streams live via Zoom in a limited weekly run until May 1. Runtime is 2 hours with a 5 minute intermission, and the Zoom invite is sent via email day-of performance. The show is FREE, and tickets are available by clicking here. Please reserve one ticket per computer screen, even if multiple people will be in attendance. If you need to cancel, please do so via Eventbrite. Those involved are working hard to keep tickets free, but donations will be gratefully accepted to help with their production costs, please venmo @julie-pinero .

Suzanna BowlingJune 23, 2022
Read More
Scroll for more
Tap
What to Watch in The New Year: April 6
The Oxy Complex Tries Hard to Unpack Our Skin Hunger Dilemma Over One Sleepless Night of Searching for Connection