It is hard to feel sorry for the mistress in Maggie Diaz Bofill’s Devil of Choice, now at the Cherry Lane Theatre as part of the Labyrinth Theatre Company. 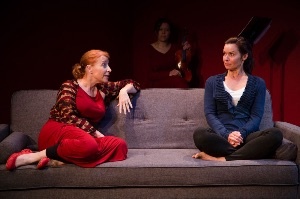 The play follows a version of “Faust”, where Sal (David Zayas), an alpha male, thinks he is the cat’s meow as he cheats on his wife. This full-of-himself English professor shames his wife, Pepper (Elizabeth Canavan) in front of others and gets her to become best friends with his lover, Delia (Florencia Lozano).

Delia is not an innocent. She comes onto Sal, where his retort is “I might just let you”, which is his version of foreplay. You see, Sal thinks himself as charming and sexy, but so does his wife and girlfriend.

It’s not that Pepper’s and Sal’s marriage is good.  It’s not.  Until Sal’s guilt starts his sexual remorse, making Pepper a satisfied costumer despite her husband’s flaws. As Pepper gains her confidence Delia loses hers.

Also, it seems Sal and Pepper have little in common. Delia and Sal run every morning at 5 and then hop into her car. It turns out Pepper, who is a pack rat, out of shape, and stuck in a dead-end job was an amazing concert violinist until she gave it all up for Sal. As Delia breaks away from her lust for Sal she becomes a flower that blooms as Pepper and Sal are trapped in a hell of their own flaws.

Mr. Zayas, Ms. Lozano, and Ms. Canavan all make moments of their own in this play. Mr. Zayas is commanding and believable as the brutish man who has not evolved. Ms. Canavan’s conversation to Delia about her sexual escapades with her husband is hysterical as Ms. Lozano stuffs potato chips into her mouth. Also, Ms. Lozano’s monologue about being a sunflower is rather heartbreaking. All three are longtime members of Labyrinth.

The Labyrinth, founded in 1992 as the Latino Actors Base, consistently puts out good work and though this play has flaws it is well directed by Shira Lee Shalit and well played by violin player Melisa McGregor.

In light of the #MeToo movement, this play seems out of touch and yet shines a light on exactly what is wrong with this compact trend. Women are not always the victims. A lot of times women are they’re own worst enemies. Going after somebody else’s husband, no matter the chemistry, is flawed. It takes two to tango.