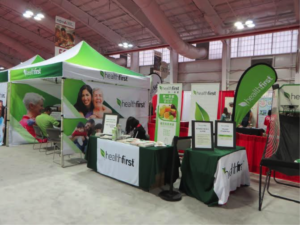 According to a study done in 2015, states nearly 50% of adults living in the U.S. have diabetes or pre-diabetes. In New York an estimated 2 million people, or 12.3% of the population now have diabetes. Of these, 517,000 of them have diabetes and simply do not know it. In addition, 5,412,000 people in New York or a staggering 36.2% of the population, have prediabetes. Every year an estimated 66,000 people in New York are diagnosed with diabetes. The impact of diabetes hits Latino/Hispanic and African American New Yorkers even harder. Of those diagnosed with diabetes 28% are Latinos/Hispanics in the New York City market, and 31% are African Americans. In New York City during 2007, 22 African Americans and 23 Latinos/Hispanics of every 100,000 died from diabetes. About one third do not even know they have the disease. Type 2 diabetes often does not have any symptoms, which leads to diabetes as the leading cause of blindness. People with diabetes are also twice as likely to develop heart disease than someone without diabetes and the cost to cover this disease is $174 billion annually, including $116 billion in direct medical expenses.

A couple of months ago I fell into this statistic, so I headed to the Jacob Javitts center to the free Diabetes Expo. It offered the opportunity to meet and talk with medical experts about diabetes management, research and prevention in a friendly environment. There were free health screenings, healthy cooking demonstrations with samples for all attendees, a fun Kids Zone with games, a registered dietitian and support group for those living with Type 1 diabetes. A full day of wellness and activities kept visitors informed.

On the Main Stage guest speakers included Mike Golic, from ESPN Radio’s “Mike & Mike” show, sharing his story about how he was diagnosed with diabetes. Chef Ronaldo Linares showed healthy culinary delights from around the world.

Of all the different devices and help, The DietSensor Nutrition App was intriguing. This nutritional App scans the cells of your food and makes food counting possible. It counts carbohydrates, proteins and lipids, tracks nutrition and monitors overall fitness all while accessing on-the-fly personalized nutrition and fitness coaching in a few simple clicks. Today, DietSensor connects to all your favorite fitness Apps and devices. It is the most complete and advanced food logging tool available. Its proprietary database features 600,000 food items in 19 countries in 12 Languages and continues to grow at a rapid pace. DietSensor is a powerful new tool to help in the management of chronic health conditions like diabetes, which is growing at fast rate, especially in the United States. Founded in 2014 by Remy and Astrid Bonnasse, who, following the discovery that their 9-year-old daughter was affected by Type 1 Diabetes, quit their executive careers and devoted their energies into developing the DietSensor App. DietSensor’s core goal is to stem the growth of diabetes and obesity by providing people and businesses with access to real-time, real world Applications that better manage chronic conditions. For further information, www.dietsensor.com.

Did you know as a resident of New York, you and your family have access to a statewide Prescription Assistance Program (PAP). Create and print your free discount prescription drug card coupon below at www.newyorkrxcard.com. This pharmacy coupon card will provide you with Rx medication savings of up to 75% at more than 68,000 pharmacies across the country including CVS/pharmacy, Duane Reade, A&P, Hannaford, Kinney, Kmart, Stop and Shop, Target, Tops, Walgreens, Walmart, Wegmans, and many more. You can create as many coupons as you need. The Coupon/Card is pre-activated and can be used immediately!

Finally no more giving yourself shots. Afrezza is an inhaler to control diabetes. The inhaled insulin was approved by the FDA in 2014. You place the insulin medication in the cartridge of the inhaler, pop it shut and then breathe in. This is good option for both Type 1 and Type 2 diabetes patients. “Those micro particles fly into the airways when patient breathes and when they reach the inner lung surfaces they dissolve into the inner lung fluid and they move quickly to the bloodstream,” Dr. Hasan said. Afrezza is a mealtime insulin only and insulin is needed to metabolize sugar after a meal. Dr. Hasan says he’s found in data from his patients that it works quickly, causing less blood sugar reaction and less weight gain which can be seen with regular insulin. You can’t be under the age of 18, a smoker or someone who recently quit, also anyone with chronic lung issues cannot use it. But in some patients it could mean getting rid of the injections for good, or at least cutting the number of daily shots down considerably.