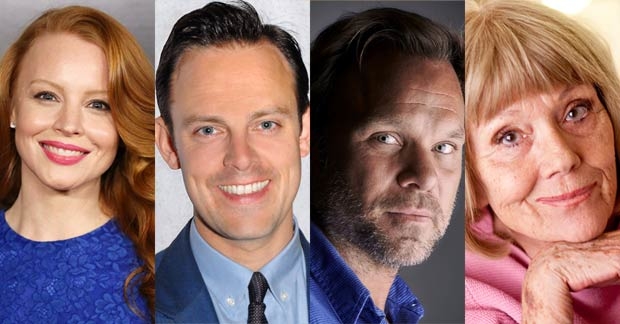 Lincoln Center Theater (under the direction of André Bishop) has announced that Lauren Ambrose will be Eliza Doolittle, Harry Hadden-Paton will be Henry Higgins, Norbert Leo Butz will be Alfred P. Doolittle, and Diana Rigg will be Mrs. Higgins in its upcoming production of Lerner & Loewe’s My Fair Lady, directed by Bartlett Sher. Produced in association with Nederlander Presentations Inc., the classic musical, with book and lyrics by Alan Jay Lerner and music by Frederick Loewe, will feature choreography by Christopher Gattelli and music direction by Ted Sperling, and will begin previews Thursday, March 15 at the Vivian Beaumont Theater (150 West 65 Street). Opening night is Thursday, April 19.

My Fair Lady premiered on Broadway on March 15, 1956. The legendary original production won 6 Tony Awards including Best Musical and ran for 2,717 performances making it, at the time, the longest-running musical in Broadway history.

Lincoln Center Theater’s production of Lerner & Loewe’s My Fair Lady will have sets by Michael Yeargan, costumes by Catherine Zuber, lighting by Donald Holder, and sound by Marc Salzberg. Additional casting and creative credits will be announced at a later date.       Harry Hadden-Paton and Diana Rigg are appearing with the support of Actors’ Equity Association.

Lauren Ambrose (Eliza Doolittle) LCT: Awake and Sing!. Broadway: Exit the King. Off-Broadway: Juliet in Romeo and Juliet and Ophelia in Hamlet, both at the Public Theater’s Shakespeare in the Park. A two-time Emmy Award nominee for her performance in the HBO series “Six Feet Under,” her other film and television credits include Where the Wild Things Are, directed by Spike Jonze, Wanderlust, Sleepwalk with Me, Starting Out in the Evening, I’m Coming Over, The River, “Torchwood,” “Law & Order: SVU,” and “The X-Files.”

Harry Hadden-Paton (Henry Higgins) will be making his New York stage debut in Lerner & Loewe’s My Fair Lady. His UK theater credits include in the West End: The Importance of Being Earnest (Ian Charleson Award nomination), Flare Path, and The Pride. Off-West End: She Stoops to Conquer (The Royal National Theatre), Posh (The Royal Court), The Changeling (The Young Vic), and The Prince of Homburg (The Donmar Warehouse). Known to U.S. television audiences for his portrayals of Bertie Pelham on “Downton Abbey” and Martin Charteris on “The Crown,” his other TV credits include “Versailles,” “Wallander,”and “Grantchester.” Film: The Little Stranger, About Time, The Hollow Crown, The Deep Blue Sea, In the Loop, and La Vie en Rose.