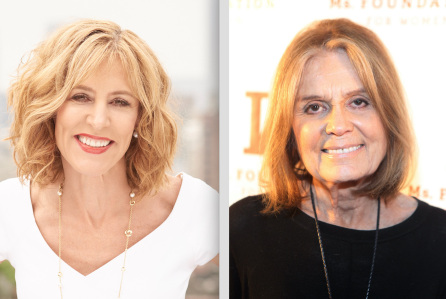 Tony Award-winning producer Daryl Roth (Kinky Boots, The Normal Heart, Indecent), is pleased to announce that Oscar, Emmy and Golden Globe winner Christine Lahti will star as Gloria Steinem in the world premiere of Gloria: A Life, a new play about Ms. Steinem as a symbol of past, present and future change. The play, written by Tony Award-nominee Emily Mann (Having Our Say), is directed by the visionary Tony Award-winning Diane Paulus (Waitress, Pippin).

“Gloria Steinem helped me find feminism, which has been my life jacket, a way to navigate through a world that doesn’t treat girls and women like full human beings,” Ms. Lahti said. “For over forty years, she has worked tirelessly to enrich, empower and save women’s lives. To be able to play her and tell her remarkable story is one of the greatest thrills and honors of my life, not to mention my career.”

“I’m honored to be represented by Christine, and I know I will learn from her insights, too,” Gloria Steinem commented.

Gloria: A Life weaves together personal and history-changing moments of the past fifty years, from consciousness among a few women, to the majority tipping point of national and global consciousness that we are now witnessing. Starting with Gloria’s early adventures as a rare female reporter, the revelations of the play include stories of the people who inspired her and led her to inspire others.

Act One focuses on her personal life and activism, and Act Two is a Talking Circle in which the audience will be invited to carry the themes of the play into a conversation of their own. This exciting and unique production offers a new form of communicating through theatre.

As Gloria Steinem explains, “What makes me feel enthusiastic about this whole idea is that after Act One about my life, the audience will take over and become a talking circle with a life of its own. During many years of traveling and organizing, I’ve come to have great faith in the magic of people talking together after a shared experience. Computers may give us information, but only being together with all five senses creates empathy and action.”

Daryl Roth says, “We feel it’s incredibly important to be telling this story at this moment in time, Gloria’s life and all she has accomplished brings us hope, reminding us how far we’ve come, and inspiring a new generation to go further.”

Gloria Steinem is a writer, speaker, activist and feminist organizer. She co-founded New York Magazine and Ms. Magazine, where she remains a consulting editor. She has produced a documentary on child abuse for HBO, a feature film about the death penalty for Lifetime, and WOMAN, a series of eight documentaries for VICELAND about violence against women in eight countries, from the United States to Zambia. She is also the subject of The Education of a Woman, a biography by Carolyn Heilbrun, and HBO’s “Gloria: In Her Own Words.” Her books include the bestsellers My Life on the Road, Revolution from Within, Outrageous Acts and Everyday Rebellions, Moving Beyond Words, Marilyn: Norma Jean, on the life of Marilyn Monroe, and in India, As If Women Matter. She was a member of the Beyond Racism Initiative, a three-year effort to compare racial patterns in South Africa, Brazil and the United States. She co-founded and serves on the boards of the Women’s Media Center, Equality Now and Donor Direct Action, and is a frequent speaker on campuses and in the media. She is an advisor to TIME’S UP, a part of a global movement against sexual harassment and violence. In 2013, President Obama awarded her the Presidential Medal of Freedom, the highest civilian honor. She lives in New York City.

Christine Lahti (Gloria Steinem) starred on Broadway in God of Carnage, The Heidi Chronicles, Present Laughter with George C. Scott, Division Street, and Loose Ends. Recent credits include Suzan-Lori Parks’ Fucking A (Signature). Off-Broadway: Landscape of the Body; The Country Girl; The Woods (Theatre World Award, Public Theatre); Hooters (Playwrights Horizons); Three Hotels (Drama Desk nomination); and Little Murders (Obie Award). In Los Angeles: Three Hotels with Richard Dreyfus (Mark Taper Forum); Third and Love, Loss and What I Wore (Geffen Playhouse). She earned her first Oscar nomination for Swing Shift, then took the statue home 10 years later as a first-time director for her short film Lieberman in Love. Other film credits include Running on Empty; Leaving Normal; The Doctor; Housekeeping; Whose Life is it Anyway?; …and Justice for All. Television: Emmy and Golden Globe Awards for “Chicago Hope”; Golden Globe for “No Place Like Home”; “Jack & Bobby” (SAG, Golden Globe nominations); “Amerika” (Emmy and Golden Globe nominations); “Out of the Ashes”; “The Pilot’s Wife”; “Open House”; “The Book of Ruth”; “Grace and Frankie”; “Hawaii Five-O” and “Law & Order SVU,” among others. She is married to director Thomas Schlamme, and the couple have three children.

Emily Mann (Playwright), is in her 28th season as Artistic Director and Resident Playwright of the Tony Award-winning McCarter Theatre Center. Her plays include Having Our Say, adapted from the book by Sarah L. Delany and A. Elizabeth Delany with Amy Hill Hearth; Execution of Justice; Still Life; Annulla, An Autobiography; Greensboro (A Requiem); Meshugah; Mrs. Packard, and Hoodwinked (a Primer on Radical Islamism). She is currently writing the stage adaptation of The Pianist. Adaptations: Baby Doll, Scenes from a Marriage, Uncle Vanya, The Cherry Orchard, A Seagull in the Hamptons, The House of Bernarda Alba, Antigone. Awards: Peabody, Hull Warriner, NAACP, Obies, Guggenheim, Tony, Drama Desk, Outer Critics Circle nominations, a Princeton University Honorary Doctorate of Arts, a Helen Merrill Distinguished Playwrights’ Award, and the Margo Jones Award.

Daryl Roth (Producer) holds the singular distinction of producing seven Pulitzer Prize-winning plays: Anna in the Tropics; August: Osage County (2008 Tony); Clybourne Park (2012 Tony); How I Learned to Drive; Proof (2001 Tony); Edward Albee’s Three Tall Women; and Wit. The recipient of 12 Tony Awards and London’s Olivier Award, her over 110 award-winning productions both on and Off-Broadway include Kinky Boots, now in its sixth year on Broadway, with productions in London, Toronto, Australia, Korea, Japan, and Germany; Angels in America; Caroline, or Change; A Catered Affair; Closer Than Ever; Curtains; Edward Albee’s The Goat, or Who Is Sylvia? (2002 Tony Award); Paula Vogel’s Indecent; It Shoulda Been You; Nora Ephron and Delia Ephron’s Love, Loss, and What I Wore; The Normal Heart (2011 Tony Award); The Tale of the Allergist’s Wife; War Horse (2011 Tony Award); and Wiesenthal. Proud to have been inducted into the 2017 Theatre Hall of Fame, she was named to Crain’s 2017 “50 Most Powerful Women in New York.” www.DarylRothProductions.com.