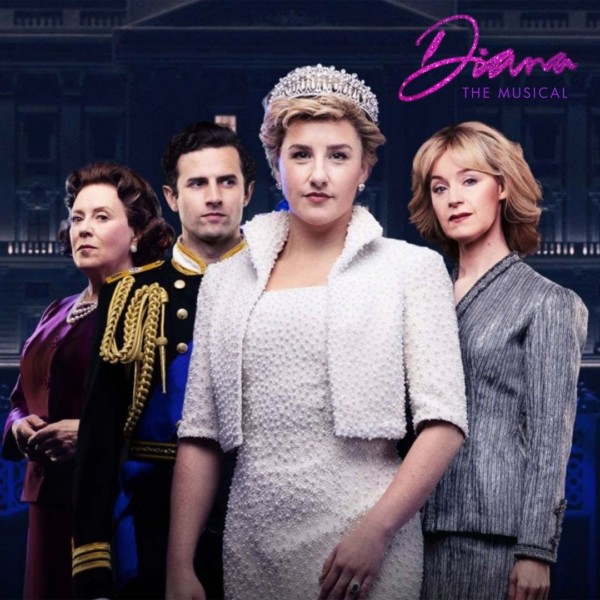 I reviewed the Broadway show Diana: The Musical when it debuted on Netflix, before it actually hit the stage November 2, 2021. I was hoping when I saw the show live, my take would be different and the answer is yes… and no.

I still believe Diana wants to be like the musical Chess, but in seeing the show live, I realize how much David Bryan (music and lyrics) rips off melodies of The Who, Jim Steinman, Evita, Dire Straits, Duran Duran, Billy Joel  and Aerosmith. As for the lyrics they are banal and inane.

Joe DiPietro’s book and lyrics are still redundant and the show has no heart. Here Diana comes off as a jilted, vindictive mess and it is hard to feel for her at all. At times it is like some big insiders campy joke.

Jeanna de Waal’s, as Diana is simply unappealing. De Waal can sing and wails every belt note they give her, but her Diana is in some kind of Barbara Cartland novel. Her fairytale romance is doomed from moment one, so she seems unintelligent and a little unhinged. The sparkling creature the world fell in love with, falls flat.

The musical follows Diana (de Waal) from her first meeting with Charles ( a rather appealing Roe Hartrampf) through her divorce and tragic death. We get her greatest hits in a rapid succession. Her marriage, births, her self abuse, working with AIDS patients and her affair with James Hewitt (Gareth Keegan). Camilla (Erin Davies) and Charles come off in a much better light and ones if Camilla’s press team penned this show.

Christopher Ashley’s direction seems disjointed and the music and lyrics by Bon Jovi’s keyboardist David Bryan and Joe DiPietro, makes this show seem that it is 3 shows in one. There is the rock score that is sung mostly by the ensemble and the reporters, then there are the ballads that go nowhere and are blasé, then there are the lyrics that are inane.

Brits are known for being reserved, but choreographer Kelly Divine has these commoners grating and thrusting like pimps and hookers selling their wares.

The only highlights are Erin Davie’s, who is consistently good and gives a moving performance, Roe Hartrampf, who is a find and I look forward to seeing him in something else. Judy Kaye who does double duty as both the Queen and Diana’s step-grandmother, Barbara Cartland, does better as the later bringing moments of fun. The role of the Queen is just poorly written as is everything else.

What we do get is a show of Princess Di’s greatest hits in fashion, which are recreated splendidly by William Ivey Long, but can we even mention that with all that’s gone on.

What was so bizarre were the 20 year olds screaming like this was a rock concert and knew who the performers were before they stepped out on stage or did a moment of staging. When asked how they knew who Judy Kaye was, they couldn’t name one show she had done or couldn’t really answer me when I asked how they knew she would start the second act.

Suzanna BowlingJanuary 26, 2023
Read More
Scroll for more
Tap
Broadway’s Girl From the North Country Wraps Us Tenderly in a Worn Coat of Sadness and Beauty
Becoming Broadway: An Introduction To A Career In Theatre