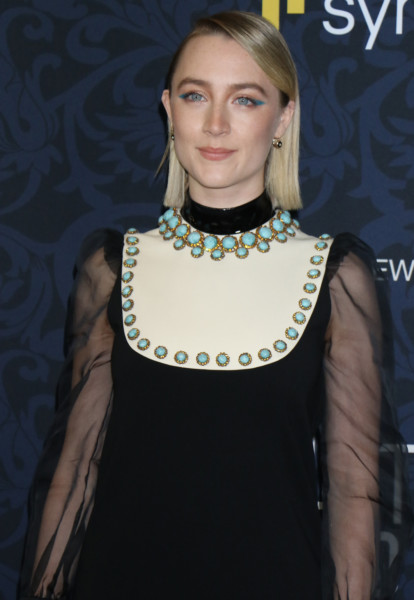 Of the controversies associated with this year’s Oscars, the absence of women among many of its categories — especially Best Director — have highlighted the inequity of this award’s process. And of the many women creators considered, Little Women director Greta Gerwig‘s omission has often been cited in the media as most egregious one. Nonetheless, the film’s lead Saoirse Ronan, who plays Jo — the sister who writes the book that all is based on – was nominated for Best Actress; Florence Pugh got a Best Supporting Actress nom and Gerwig got one for Best Adapted Screenplay.

When Gerwig emerged on the scene, she was known as an actor but she has admitted that her control freak nature drove her to finally make her own movies. Lady Bird, her first feature, surfaced to great notice and and award noms, proclaiming her as a new face among female directors. So when talk stirred about the making of a new cinematic Little Women (there have been several before this), Gerwig clamored to be the one to make it a reality. It also offered a considerable challenge for anyone to make a new version distinct from those earlier versions.

Author Louisa May Alcott’s classic 19th century novel reflects what is still a very progressive take on young women and their own self-determination. But really, it’s no wonder since Alcott’s own parents were very much part of progressive movements of their own time. And Louisa May’s own life took shape on her own terms; she was an abolitionist, feminist and remained unmarried throughout her life. Her debut novel detailed the life of four sisters and surprised its readers at the time. Her book emerged shortly after the Civil War, becoming a significant text for a generation whose world have been overturned by an overwhelming war.

Acknowledged the tall 30-something in an interview, “I am a Little Women nerd. There is so much of the book that struck me as wildly modern and so important to tell right now. My love of the book was where I began — I read it so many times when I was a girl, but in reading it as an adult I thought, ‘This is even more alive than I had remembered.’ In reading it as an adult I kept underlining passages and writing, ‘Do people know this is in this book?’

Though seemingly targeted to young women of the day, it addressed issues in a refreshingly adult manner and cogent in ways that other such books of the time weren’t for audiences of all stripes. It not only didn’t look down on its characters, it challenged women to see themselves in a new light which stirred strong feminist leanings.

Gerwig added, “My guiding light became was, ‘How do I not change what’s in the book, but bring out what’s already there, and make a film that Louisa May Alcott would have liked?’ I was able to do things like have the publisher say, ‘Frankly, I don’t understand why she didn’t marry the neighbor.’ I know that everyone for all time has asked that question and because of the way I structured the film, I was able to actually have someone say that.

“When I read the book as an adult I was struck by the sections when they are adults because, being an adult, I read them in a new way. They were amazing and incredibly compelling: sister Amy in Europe, contending with whether or not she is a great artist is completely fascinating and interesting; the oldest, Meg, is married and has children and is what you’d consider to be narratively closed as a character because she’s married, is dealing with domestic frustrations, being left alone with her young children and spending too much money and not telling her husband about it. The youngest, Beth is at home alone in her childhood dealing with what she knows is her own [impending] death. I thought, ‘Jesus Christ, this is fascinating.’ And then I realized once those girls are all separate as adults they are never going to be all together again. The thing they miss is already gone. They’ll never get it back.

“I found that to be very moving, and it allowed the thing that they are looking back at and that they are yearning for in some way to be the thing that the audience is also yearning for. It was something that occurred to me also because there’s so much doubling in the book between the first half and the second half. The most obvious one, the initial one that I was moved by, was that, the magic of childhood is [illustrated] when Beth gets sick, she [then] gets better. But in adulthood, when Beth gets sick, she dies.”

The smiling Gerwig told a crowd before the film rolled. “I grew up with this book; a lot of people did. They felt like my sisters. Their adventures felt like my family’s. In some ways, when you grow up with literature like this, it becomes part of your internal life. It’s always been my dream to make this before I even had the option.”

At a special screening where Gerwig did a Q&A, she was asked, in what way did she put her own stamp on the film; how did she “Gerwig-ized” it? “I would say that 90% of the dialogue is either directly word for word from the book or from a letter or journal that Louisa May Alcott had written. If there’s a Greta Gerwigness in it, I would say it’s been the speed of delivery more than anything else. I actually think you’d be surprised. Most of the lines are — even some lines that you don’t think are  — in the book, which is the reason I wanted to make the movie. like with Marmee’s line, ‘I’m angry almost every single day of my life.’ That’s from the book. When I reread it, I underlined it and wrote beside it. ‘Marmee’s been angry for a 150 years?’ It was more about pulling things out of the book that I felt hadn’t really been explored fully. And then speeding it all up, because part of the pleasure to me was taking these lines that had been embroidered on pillows and having them raced through.”

As for her incredible cast, she noted in another talk, “What they did was they so tenderly brought each and every character to life. They did that magical thing that you can do [in a film like this] — they make them live and breathe in front of you.

“One of the things that struck me when I was working on it, was how much these women as adults meant to me, in going through their adulthood. The way I have structured the movie is about how we are always are walking with our childhood selves in a way. As a young girl my heroine was Jo, and as a young woman, my heroine was Louise May Alcott.”