Thanks to his uncanny portrait of Winton Churchill, veteran actor Gary Oldman is likely to be nominated for an Oscar. But that’s only one of the many virtues to director Joe Wright’s latest effort to create a superior expression of cinema. In “Darkest Hour,” he explores the hours and days leading up to the crushing defeat of the united European allies who had tried to block the advancing Nazi troops in 1940 as they spread across Europe under Adolf Hitler’s command. 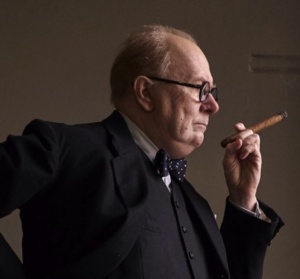 Through a series of missteps and ridiculous strategic blunders, the Nazi onslaught was neither held off nor effectively resisted. Most of Western Europe fell and over 300,000 British troops were stranded on the beach of Dunkirk. There, at the edge of France overlooking the English Channel, the troops waited for rescue. 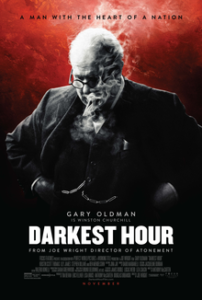 The film offers an intimate look at events from the moment Churchill is engaged as Prime Minister to the point where an unusual fleet of private boats and ships are enlisted to rescue the troops (witness the film “Dunkirk” which takes off at this point in real historical terms) and bring them home. Through a variety of clever cinematic elements, Wright propulsively reveals all the drama that took place behind closed doors that led these events. Nothing particularly new is revealed but it’s crucial for ongoing generations to be remind of such historical events as something dynamic, not locked in a dusty tome. 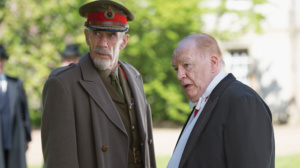 King George VI (played to precision by Ben Mendelsohn) provides a wonderful restrained counterpoint to Churchill’s occasional bluster. And the presence of his wife Clementine Churchill (who Kristin Scott Thomas perfectly inhabits) helps to make sure our view the Prime Minister is not that of a caricature but of a human figure.

This is no dry and dusty retelling of ancient history. Director Wright and his cast — especially Oldman — reminds us what it really takes to be a top-flight politician, world leader and worthy of our admiration.