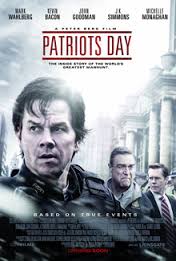 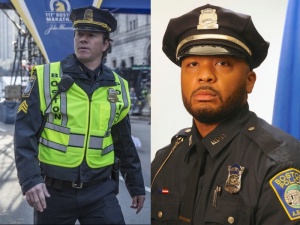 With workman-like efficiency, veteran director Peter Berg uses his latest film, Patriots Day, to provide some insight into what happened, who it affected, and how everyone reacted to the 2013 Boston Marathon terrorist bombing. This action-packed “whodunnit” offers an opportunity to make a little sense of something that should never have had to be understood. Dramatizing the dual remote explosion of two pressure cookers placed near the finish line serves several purposes — to celebrate survivors, first responders and investigators while providing a breakdown of just what took place before that day, at the bombings’ moments and the week that followed. 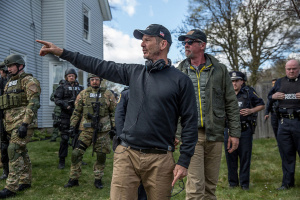 Though he’s not a director who does things with an “arty” touch, his sure-handed work here offers enough details and nuance that makes this film a bit more than just a big-budget TV movie. From the start, stories of the essential participants — Police Commissioner Ed Davis (John Goodman), Sergeant Jeffrey Pugliese (J.K. Simmons) and nurse Carol Saunders (Michelle Monaghan) — are interwoven as the day begins. Once the bombs explode — unflinchingly shown in graphic detail — Special Agent Richard DesLauriers (Kevin Bacon) joins this visceral chronicle that suspensefully delineates the ever-expanding manhunt for the culprits. 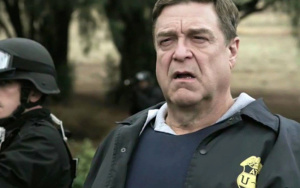 Included in the cast is Berg regular Mark Wahlberg as Police Sergeant Tommy Saunders — a composite of several key figures — who joins other law enforcement figures in a race against time to track down the bombers before they try again, even possibly, in New York. Though Wahlberg’s sincerity gives life to this stitched-together character, we could do without his mundane speech-ifiying.

Much to Berg’s credit, he tried to give attention to one or another detail that lends insight into most of the players, from those who died, who were maimed, and who discovered the killers, or contributed to the capture of the Tsarnaev brothers; he even examines their lives as well  including that of converted Muslim wife Katherine. But this film doesn’t delve that deeply into their motives or psychology; it instead focuses more on how the aftermath of the bombing impacted on the lives of everyone involved — and how they’ve survived ever since.

Without being overbearing about it, Berg’s “Patriots Day” serves several notions so that this a film worth viewing and talking about afterwards — especially since incidents like this one keep happening. It’s no work of profundity but the more we can analyze what happened before, the better we can get at preventing future attacks.