Everybody in the western world, and maybe beyond it, knows the lovable children’s character Winnie the Pooh — the gentlest of gentle creatures, the one who lets kids know that through it all, there’s one figure who always represents innocence and the light. 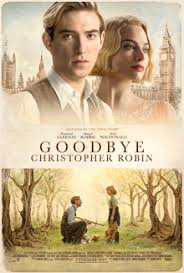 The Winnie the Pooh stories were inspired by father’s appreciation of his son as he grew up. The Dad in this case was noted playwright A. A. Milne (Domhnall Gleeson) who learns to connect with his son Christopher Robin at a time when men did little to connect with their offspring besides being the dominant provider. In Director Simon Curtis’ film “Goodbye Christopher Robin” he offers a glimpse into this relationship as the elder Milne transitions from shell-shocked writer-turn-war-veteran to country squire to loving father to celebrated children’s book author. 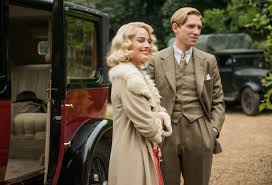 Along with mother Daphne (Margot Robbie) and nanny Olive (Kelly Macdonald), son Christopher Robin lives at first, an isolated life in their home near the countryside far from the hustle and bustle of London. Then, thanks to the success of dad’s stories of these imagined characters from based on his childhood toys, Christopher Robin becomes a high-profile celebrity as the magical world of Pooh becomes an international phenomenon

He and his family are swept up in the international success of the books; the enchanting tales provide hope and comfort to England after the crushing devastation of World War One but with all the attention focused on Christopher Robin, the cost on the family was profound as he became one of the world’s first media darlings.

This film offers a set of balanced performances by this quartet of characters (with several actors playing Christopher Robin at various ages). Mother and child and father and nanny pirouette throughout the course of the story outlined here. The weight of this film rest on actor Domhnall Gleeson whose performance as Milne provided insight into a man who learned how to be a father while making his share of mistakes along the way.

Director Curtis has an uncanny way of finding the story beyond the narrative as he did in “My Week With Marilyn” where he drew out a subtle performance from Eddie Redmayne as well.  In fact, both films address the toxic effect fame can have on people not exactly equipped to handle it. Though film seemed overshadowed by other films set in 20th Century Englnd, this one shouldn’t be overlooked.