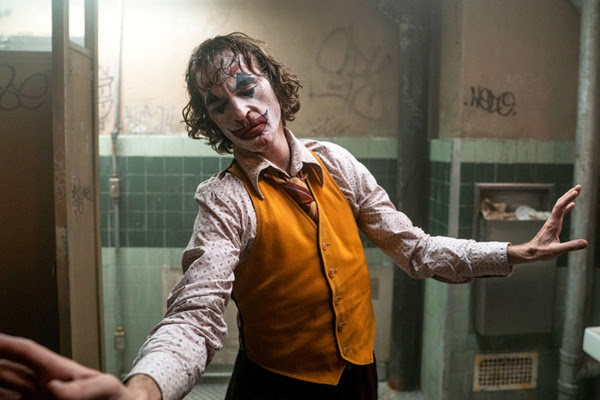 Viewing Joker a second time — thanks to Deadline’s Awardsline screening series — not only provided further insight but also a chance to hear director Todd Phillips explain himself, just as he did at the film’s World Premiere Q&A. Phillips is no stranger to controversial award nominations. In 2006 he was nominated for Best Adapted Screenplay for scribing Sacha Baron Cohen’s satirical comedy Borat — not exactly the most politically correct film of its day. Now he’s gotten both hosannas and harangues for his very un-comical Joker (though it has darkly funny moments). But despite divisive responses, it nonetheless spurred 11 Academy Award noms including Best Picture, Best Director, and Best Adapted Screenplay and earned him the Golden Lion at the 76th Venice International Film Festival.

Once known for writing and directing comedies from 2000’s Road Trip to The Hangover Trilogy (released in 2009, 2011, and 2013), Phillips expanded into other genres when he did a biographical crime drama — 2016’s War Dogs. But did he ever imagine that Joker — an experiment in transforming a comic book character into some kind of relevant, contemporary figure — would produce such a response, “Honestly, I couldn’t have imagined the level of discourse it [stirred] in the world. It’s a complicated movie and that’s okay. It sparked conversations and debates around it. It sounds insane, but there has been so much conversation around the movie written by people that haven’t seen it. There have been think pieces that say, ‘I haven’t seen the movie, I’m not going to see the movie’ and then they write two pages about it. I didn’t expect that. See the movie and then comment; it seems logical. But it probably helped to have people talk about it. I just didn’t expect that.”

When he dug into the character, Phillips used existing storylines and character as a foundation but took things in a radically different direction from other cinematic Jokers. The director expanded on how what he and his team came up with ended up on screen. “When the idea came to do a stripped down comic book film, we wanted to do a character study on one of these characters we’ve seen before. The logical choice was the Joker. He represents mayhem and chaos, two things I’ve always been somewhat attracted to.”

Added the 49-year-old, “To breakdown how we got it like that was very simple. Scott Silver and I wrote the screenplay and it was about running things through as realistic a lens as possible. That carried over to the design, the cinematography and everything else. What do we know about Joker? He laughs in the comics and movies. How did he get that laugh? Why is his skin white and his hair green? Well in the comics, he fell into a vat of acid. We thought about that in the real world and said, ‘What if he was a clown?” It was fun backwards-engineering that while we were writing, giving him this affliction [as the reason] for his laugh. There was a lot of things that formed. There’s childhood trauma, which is not a new idea, and there’s a lack of love; there’s Gotham which represents a lack of empathy. There’s all these things that to us build character.”

Born in Brooklyn, this New Yorker had been interested in controversy ever since he began as a student filmmaker making a documentary about the late shock punk purveyor GG Allin — “Hated: GG Allin and the Murder Junkies.” So when Phillips cited the directors and films that inspired him, he picked some controversial ones. “When I was younger the movies I grew up on were comedies. But as I got older and started to study filmmaking at NYU, I was studying the great filmmakers of the 1970s the ones who really touch people in a [strong] way. There was Sidney Lumet’s ‘Dog Day Afternoon’ and of course Martin Scorsese, his influence is in this movie — ‘King of Comedy’ and obviously, ‘Taxi Driver.’ Production designer Mark Friedberg, Mark Bridges, and I were referencing those films. We talked about Network. I discovered these movies in my early 20s and that changed me. We were referencing those movies throughout this. There’s also the visual references we used for this movie from others and from photographs. Mark and I would pour over that and Mark grew up in New York.”

His Gotham is very much like New York of the 1980s, so this city was about creating this character, which he sought to explore. “I grew up in a town called Teaneck, New Jersey. So as someone who went into the city and snuck in on buses and stuff in the early 80s, I have strong memory of that era. Much of the movie is about that look for references and something anthropological. What did Gotham, New York and New Jersey — since we were shooting there — look like back then? How do you get to that? I found that every time we’d reference movies like Dog Day photographically, it’d be like ’It’s not that movie.’ It’s more of an influence for the idea than the look and feel of it. So for me, what I did was transport my memory of what it was when I got robbed. What did it feel like? What did the city feel like? You start talking about being in New York in the early-80s, late-70s, garbage strikes, what New York looked like. Everything in the movie was run through a very realistic lens.”

Besides the aesthetic, there was the development of Joker’s character, which Phillips acknowledged was as much because of a collaboration between him and star Joaquin Phoenix as anything else. “Joaquin is just somebody who got into it, through all of the characteristics of Arthur Fleck. He liked the spirit of the film, the sort of anti-comic book film.”

Phillips and Phoenix had detailed meetings over three to four months before committing, as the bearded Phillips added “It really helped us down the road.” One thing they discussed was Fleck’s distinctive, uncontrollable laugh. That aspect of Phoenix’s performance had to be right. Phillips recalled, “He was nervous about the laugh. “[The time we took] was like prep in a way. It really helped us down the road. But Joaquin is just somebody who got into it through all of the characteristics of Arthur including the wardrobe.”

Not only has the film garnered all the award buzz, it has been one of Warner/DC’s biggest hits with a box office of $1 billion in global sales. Sequel talk has been surging. “Joaquin and I have talked about it. We’d really like to do more in this world, but the story would have to be right. Neither one of us wants to do it just to do it.”

As Phoenix said at the premiere, “Now when I look back on it, I’m so grateful we did that because playing Joker informed how we approached Arthur. We had a sort of radical reinterpretation of the character. I wouldn’t change it. That happens more often than not. When people ask me I say whatever it is it’s seems right.”