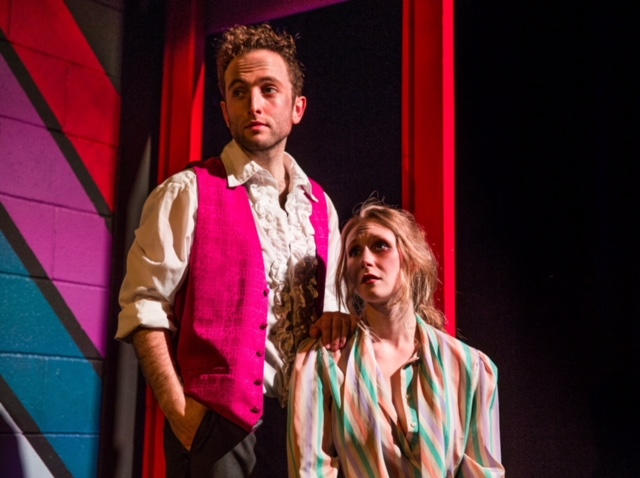 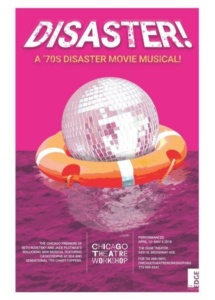 What do you get when you combine a deep love for 1970’s disaster pictures, more disco anthems than could ever be played in the VIP lounge area of Studio 54 and a writer whose tongue is planted firmly and deeply in his wicked cheek? The answer is Disaster the musical, now playing at the Edge Theater by the Chicago Theatre Workshop troupe. Making its Windy City debut, directed by Ben Baylon and written by Broadway cabaret sensation Seth Rudetsky and Jack Plotnicks, Disaster is designed to not be taken too seriously. This toe-tapping spoof of the 1970’s disaster picture genre that included titles like The Towering Inferno, Earthquakeand The Poseidon Adventure will leave you smiling from ear to ear.  Truly, there is nothing that happens here which falls into the category of too tragic or awful in this quick paced comedic misadventure. Featuring a cast of nearly twenty comedic scene stealers, Disaster is the most delightful time you will have at the theater. What this show may miss in polish it more than makes up for with moxie. Being a Chicago Theatre Workshop production, budgetary constraints appear to be the only true restriction to the fun, which trust me, you will have by attending in spades. 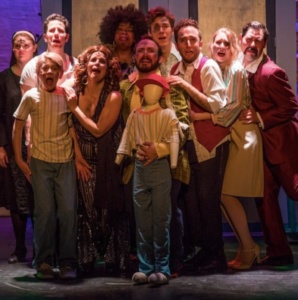 The story takes place during the inaugural voyage of the Barracuda, the first floating casino and discotheque to debut in 1979. Unbeknownst to the voyagers above, the casino was tethered on an unstable fault line ready to blow. The cast assembled for the voyage are a slew of stock characters brought to life by almost two dozen of the hardest working character actors the Windy City has to offer. The collection of comedians include handsome waiter, Chad (Nathan Cooper) and his former fiancé turned freelance reporter,  Marianne (Shannon McEldowney) “reunited, because it feels so good”. Professor Ted (the always amusing Dan Gold) plays the alarmist scientist and soon to be cruise ship hero, dastardly Tony Del Vecchio (Charlie Ward) the villainous luxury liner owner, cutting safety corners to maximize profits while simultaneously chewing through the scenery, and deadpan reformed gambling addict, Sister Mary Downey (Britain Gebhardt) once again tempted by the devil, this time disguised as the Hawaii 5-O themed slot machine.

Rounding out the voyagers, retirees Shirley (Melisssa Young) and Maury Summers (Shane Roberie), has-been disco diva, Levora Verona (Jessica Vann) utilizing her afro wig and a few tubes of cotton candy as a very politically incorrect sight gag, and sexy, if not vapid, lounge singer Jackie (Elissa Newcorn) and her twins, Ben and Lisa, both played by Pierce Cleaveland. Disaster is chocked full of dizzying disco dancing, intricately packed from corner to corner of the stage. Ensemble member Marcellus Burt is markedly the strongest dancer of the troupe who, spoiler alert, meets a quick and comedic demise thanks to a school of ravenous escaped piranhas. Surprisingly, the body count here isn’t high, but the laughter is guaranteed. Young’s Shelly Winters meets Faith Prince, act two tap dance number will leave you feeling higher than her bright orange, Keith Ryan designed, bouffant wig.
The soundtrack features a who’s who of popular power ballads and disco anthems from the late 1970’s including the feminist mantra “I Am Woman”, romantic “Still The One”, passionate “Torn Between Two Lovers”, athletic “Knock On Wood”, a macabre twist on “Once, Twice, Three Times a Lady”, the laughable “Don’t Cry Out Loud” and of course what trip to the 1970’s would be complete without Gloria Gaynor’s “I Will Survive”. Here the Donna Summer song “Hot Stuff” refers to both beautiful women, as the lyrics originally intended, as well as the molten lava quickly escaping from the ocean floor. Add in some skull cracking falling chandeliers, heroic epipens, tap-dancing Morse code and a couple of baby shark arm puppets worn, for laughs, as opera length gloves, and it is clear to see the cast is having as much fun as the audience. The remaining creative team includes Evan Frank’s set design, Shelby Brand’s 70’s inspired costuming, Megan Farly’s spirited choreography, Oliver Townsend brisk musical direction and Jennifer Kules and Collin Helou’s dramatic lighting.
Played strictly for laughs, this Disaster is anything but. While the production’s story does run out of steam towards the end, I defy anyone to not leave with a smile on their face. All that is missing is an audience sing-a-long at the show’s end and this cult hit could find new life, yet again, at another late-night Windy City venue. Shakespeare this is not, but don’t hold that against Rudetsky and company.  They are here to make us laugh, and make us laugh they do. The run of Disaster is short, so book your ticket on this slapstick voyage quickly. Here is hoping this Disaster is tossed a well deserved life preserver know as an extension. This diligent and dedicated cast is certainly deserving of at least that.

Disaster is now playing at Chicago Theatre Workshop through May 6, 2018 at The EDGE Theater.