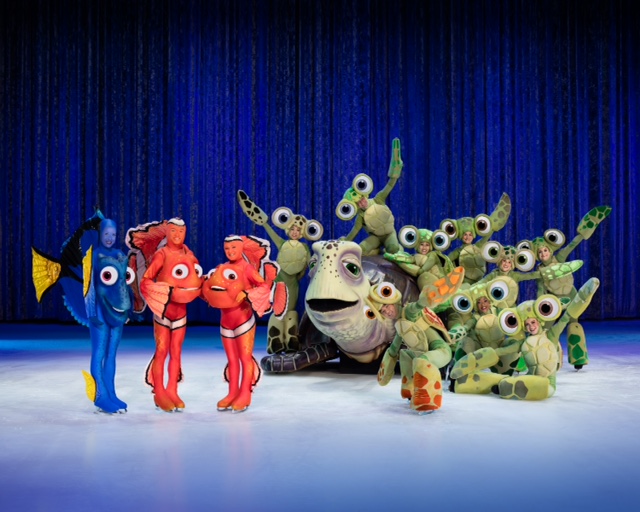 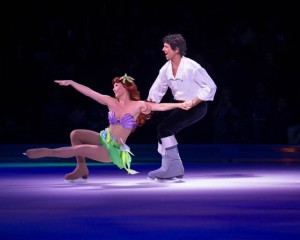 Much to the delight of several pint-sized enthusiastic fans, Ariel, Elsa, Rapunzel, Jasmine and dozens of their smiling friends took to the rink at Allstate Arena for a brand new revue. Feld Entertainment presents Disney on Ice 100 Years of Magic, a bold and enjoyable extravaganza, blending dozens of Disney’s most favorite characters with world traveled, talented skaters. Producers Kenneth and Nicole Feld teamed up with a crew of top talent which included director Patricia Vincent, choreographers Sarah Kawahara and Cindy Stewart, scenic designer David Potts, costume designers Greg A. Poplyk (Frozen) and Scott Lane and LeRoy Bennett, the lighting designer behind tours from Madonna, Lady Gaga, Tina Turner, Prince and David Bowie. Not too shabby. Feld Entertainment’s concept is to create lifelong memories, one act at a time, and they have done it again. Splitting their three week run in Chicago between the Allstate Arena and the United Center, the show features a combination of singles and pairs of lovely and remarkable ice dancing,set to the familiar soundtrack of over 30 Disney classic songs. Axel jumps, camel spins, and a lexicon of fancy footwork provided from 23 male and 26 female performers, ranging in age from 18 – 48 years, and sporting a whopping 227 costumes, there is a something here for every level of Disney fan. 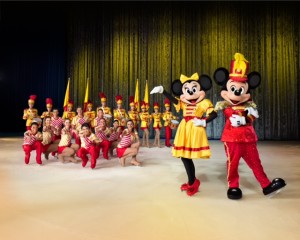 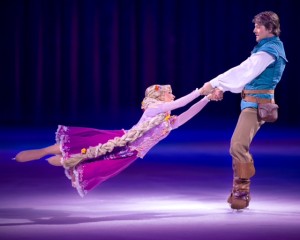 Act One began, where everything Disney related began, with a mouse. Mickey Mouse that is. Partnered with Minnie and their friends Goofy and Donald, the four icons, working under the guise of crafting a movie, functioned as Masters of Ceremony while introducing the different vignettes of the showcase. This cinematic concept tied all the individual stories together nicely. Up first, the boy with no strings, Pinocchio and the Blue Fairy skating to a mix of “When You Wish Upon a Star” and “I Got No Strings On Me,” backed by a quartet of skating cancan girls and fan favorite, Jiminy Cricket, the audience was in for a journey from classic to contemporary hits. Speaking of hits, the cast of Finding Nemo performed next. On an exciting adventure to the great barrier reef with his dad and best friend Dory, the fish glided to the tune of  “Joy to the World” while celebrating “the fishes in the deep blue sea” which had never proven to be so much fun. Even Crush, the surfer dude turtle, and his son, Squirt, aided by a crew of almost a dozen skating baby turtles were met with glorious oohs and aahs from the packed stadium. Rounding out this first set, the brainy bookworm Belle and her friends from Beauty and The Beast, Cogsworth, Lumiere and Bimbette, the French Fan, circled Belle and the Beast during a lovely couple’s skate while the villainous Gaston got what was coming to him by the set’s end. 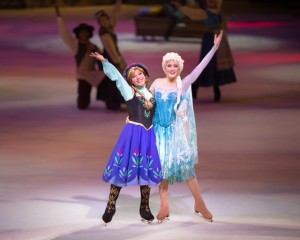 Succeeding this, a promenade of Disney princesses in a series of complicated and stunning overhead lifts. Cinderella with Prince Charming dazzled during “So This is Love,” The Little Mermaid’s Ariel and Prince Eric impressed with a mash up of “Part of Your World” and “Kiss the Girl.”The Princess and the Frog stars Tiana plus Prince Naveen delivered during “Down in New Orleans,” while Jasmine and Aladdin impressed to the tune of “A Whole New World.” Rounding out this segment, Rapunzel and Flynn Rider from Tangled skated to  “I See the Light” and the Princess who started it all, Snow White with her handsome Prince solo to “Someday My Prince Will Come.”Not to be outdone, Frozen stars Princess Anna and Queen Elsa were given the largest segment of the night to tell their now famous story. The sisters given their own costume designer, Greg A. Poplyk, who crafted incredibly detailed capes for each woman, weighing more than 30 pounds each. The largest and most elaborate set and prop pieces were also featured during this showcase, and inspired the night’s only spontaneous sing-a-long to the Oscar Award-winning, Idina Menzel sung anthem of independence,  “Let It Go!” The layback spins executed dazzled as firecrackers exploded around the triumphant Queen Elsa.  Not to be outdone, Olaf the Snowman performed “In Summer” with a kick line of 15 skating honey bees and butterflies in support. 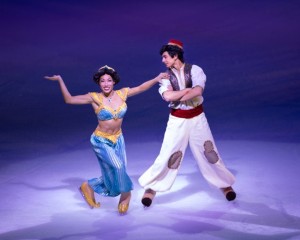 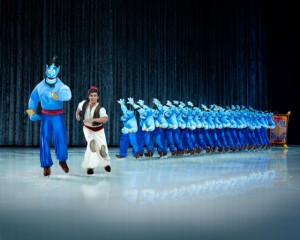 Act two began with Aladdin and the Genie. As Robin William’s vocals pounded from the speakers, I couldn’t help but think what a lovely tribute to the man who gave voice to the Genie this was, set to the song  “Never Had A Friend Like Me.”  With 20 skating Genie’s forming a frenetic line stretching from one end of the rink to the other, the smiles generated on both the children and their parent’s faces were indeed sincere.   And speaking of friends, Toy Story’s Woody the Cowboy, space ranger, Buzz Lightyear, teamed with rough and tumble Jessie while they skated in unison to ” You’ve Got A Friend In Me.  A troop of green Army men encircled the trio on ice by song’s end.   Next, heading from a child’s toy chest to ancient China, Mulan was featured in a medley that combined “Reflection” and “I’ll Make a Man Out Of You” to visually powerful results. The skating dragon impressed. Finishing the show, The Lion King’s proud Simba, beautiful Nala, and comic relief Timon and Pumbaa. Set to both “Hakuna Matata” and “Can You Feel The Love Tonight,” this was the most complex of the show’s couple choreography, featuring  intense back flips and intricate lifts. The finale of the show, “Circle of Life” featured the return of all of the principles, which included over 45 skaters on the ice simultaneously. The waves of the cast returned by the fervent children seated in the first few rows, excited to see their animated heroes brought to life. 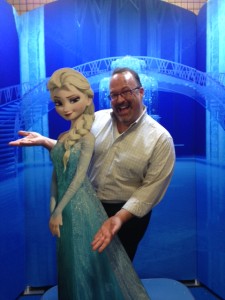 Feld Entertainment does it again. Capitalizing on the lexicon of Disney’s most classic characters, as well as the white hot sister duo from Frozen, there was something here for everyone to relish. A river of little girls outfitted like their favorite Disney princess flocked to the numerous concession and novelty stands by the evening’s end. I was triumphant, getting my photo taken with a Queen Elsa cutout, but sadly dropped my Olaf snow cone in the process.  Good thing there were 10 other stands nearby where I could easily replace it.  Make certain to bring your credit card and your patience. The crowded lines were long and slow moving, but the fun of the show was both sincere and real. The enchantment of Disney on Ice 100 Years of Magic delivers. 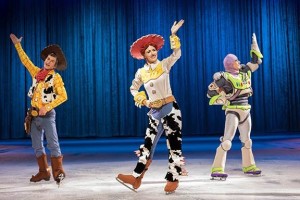 Disney on Ice Celebrates 100 Years of Magic is now playing Chicagoland through February 7, 2016 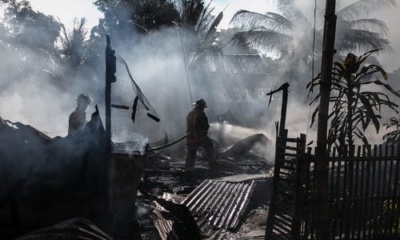 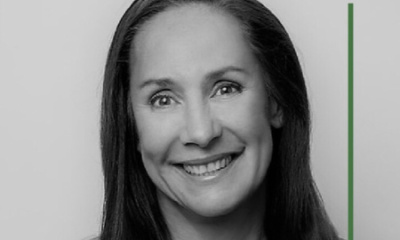