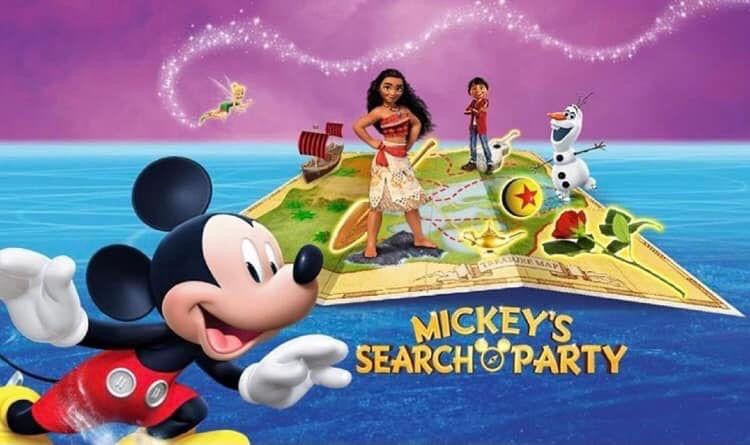 After an almost two-year Covid-19 pandemic hiatus, Feld Entertainment is back, bigger, brighter and bolder than ever before, lighting up the Allstate Arena with an aspiring cornucopia of athleticism and artistry. Disney on Ice Presents Mickey’s Search Party combined family-friendly entertainment, an ever-familiar soundtrack and over three dozen loveable animated characters brought to life, on ice. Blending talented figure skaters, gymnasts & tumblers, hoverboarders, astounding aerial acrobatics, breathtakingly detailed costumes, exploding fireworks and more, the visual adrenaline pumped into the Rosemont arena’s opening night surpassed the hype. It doesn’t matter if you don’t know the difference between and Axel jump, a Camel spin or a Sit Spin (they were all there, by the way) just surrender to the fun. Dozens of little ones in attendance were adorned in their favorite princess’s regalia, most with required masks in place. Just a reminder, proof of vaccination and masks are required for entry and the security team was not there to play. No vaccination card, no entry. Simple as that.

The story itself began with Smee and a team of pirates from Peter Pan on the hunt for Tinkerbell and her magic wand. Thinking the nefarious Captain Hook would rule all seven seas with the popular pixie’s pointer, they quickly entrapped her, encasing her in a lantern prison. It was then up to Mickey, Minnie, Goofy and Donald, with some real-world counterparts, to collect clues to rescue Tink. The first clue was a single rose, which took us to the enchanted rose of Belle and the team from Beauty and the Beast. Cogsworth, Lumiere and a kick line of skating forks and spoons joined a high-flying Belle and a team of gravity-defying aerialists set to the Oscar-nominated classic, “Be Our Guest.” Not to be outdone, the team from Toy Story showed up next. Buzz, Woody, Jessie and Bo Peep joined a slew of acrobatic green soldiers from Andy’s collection for a slapstick, two-story vignette which inspired smiles, gasps and giggles from the children in close proximity.

For skating purists, Moana’s segment truly marveled. “How Far I’ll Go” is a song of independence and the skater’s lines were simply stunning. The movie might have been from 2016, but her story remains relevant. The demigod, Maui, brought both bravado and laughs as he postured and preened center stage. Also inspiring, the lightshow during this section. Powerful projections turned the ice rink into both ocean waves and a sandy beach bridge. The visuals here truly impressive. Borrowing some video clips from the film’s climatic battle between Moana vs. Te Ka, this segment concluded with Moana triumphantly sailing off into the sunset. “You’re Welcome” indeed. Wrapping up the first act, Miguel and his ancestors from Coco in an explosion of color and costuming, celebrating the Catrina of Dia de los Muertos to the tune of “Un Poco Loco” and more.

The second half began with modern day classics, Aladdin and The Little Mermaid. Both featured stunning figure skating spirals and couples skating tricks, flips, lifts and dangerously dramatic dismounts. “A Whole New World”, “Under The Sea” and “Kiss The Girl” were the perfect soundtrack to an array of Agrabah showgirls and a sea-skating, high-flying Conga line. The final feature film was the royal sisters of Disney’s billion-dollar franchise, Frozen. No character received more applause than when the silly snowman, Olaf, took to the ice. Dressed in an array of white, turquoise and royal blue sequins, Queen Elsa’s solo skate “Let It Go’ inspired an impromptu, mass sing-along. The combined powers of Queen Elsa, Princess Anna and Olaf ended up being just enough to rescue Tinkerbell. Flying above the rink, it was time for the finale, introducing Rapunzel and Flynn Ryder from Tangled, Snow and Dopey from Snow White and over thirty other carefully choreographed costumed characters from the lexicon of the Disney Vault. Exploding fireworks, danceable, toe-tapping music and enough sweetness to fuel 100 Cotton candy machines, a satisfying ending for all involved. Speaking of sweet treats, the venders were in the lobby selling Olaf snow cones, Coco popcorn, Disney Princess coloring books and oh so much more, so do bring your credit card.

Just a few additional FYIs for planning your trip to Allstate Arena. The shuttle buses from Allstate Arena are all cancelled due to Covid-19. The cab line from a post Allstate show was also nonexistent because of Covid-19. I was stranded for about 40 minutes before I could actually summon an Uber willing to come pick me up. Drivers are not so prevalent on a cold suburban weeknight. If you cannot personally drive to Allstate to attend, skip this show. Standing outside in 7* temperatures waiting for a shuttle that never came wasn’t a fun end to an otherwise charming evening. The cold may not bother Queen Elsa, but it bothered me very, very much.