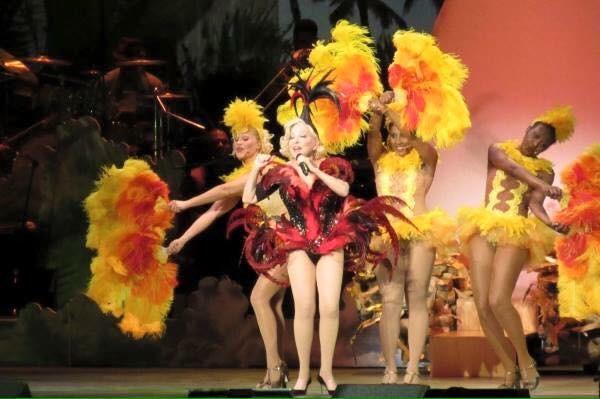 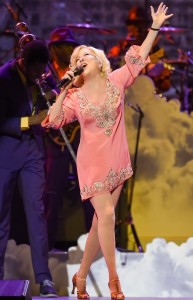 Thursday night brought three time Grammy Winner, four time Golden Globe Winner and three time Emmy winner Bette Midler and her brash and bawdy new show The Divine Intervention Tour to the Chicago United Center for a delightful, two hour walk down memory lane. With class, brass and loads of sass, the Devine Miss M lightened, brightened and frightened a near sell out stadium crowd. Arriving center stage on her makeshift  “throne” Queen Bette put on a show for her legion of loyal fans: Men, Women and a series of other queens all there to share in her glory, with love. Erect in a pink mini skirt with beaded accents, the 69 year old diva started her show with the song “Divine Intervention” and quipped “we’re here to lift your spirits, like a boob job for your soul!” 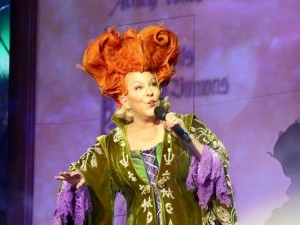 “Ah, Sweet Home Chicago” Midler cooed while engaging the crowd. “So good to know so many of my fans can still drive at night” she joked. Motioning to a section of the audience right off of the stage, Midler noted “It’s like 50 shades of grey in this section right here.” The audience continued to cheer when she teased “I don’t know if I should sing to you or talk to you about the advantages of a reverse mortgage.” Before starting her second song, “I Look Good” Midler kidded with her usual reverence, “I remain a triumph of science and fiction!” Then added “I’m like vodka: ageless, odorless and tasteless.” After finishing, she shot off a quick  “Thank you for the parade” referencing the Blackhawks Championship parade from earlier in the day that brought over 1.5 million fans downtown to celebrate the Stanley Cup winning hockey champions. “I live for your applause” she giggled. 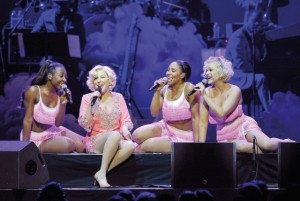 With a set list that taps almost every aspect of her illustrious career, this flashy and sometimes trashy performer introduced her trio of backup girls, The Infamous Harlettes; Caroline Hatchett, Nicolette Hart and Kyra DaCosta. “They used to be fact checkers at Fox News. I snatched them up and nobody even noticed they were gone.” Ripping off their black costumes to reveal flower petal pastel dresses,  the ladies crooned through “I’ve Still Got My Health” from Beaches, the Bobby Freeman cover “Do You Wanna Dance?” and “Throw It Away.” A noted environmentalist, Bette commented that she throws nothing away. “I put the whore in Hoarder” she wisecracked! On tour to promote her latest cd “It’s the Girls” the ladies wowed with a spirited cover of the Exciters hit “Tell Him” slowed it down with lovely harmonies on the Andrew Sisters classic “Bei Mir Bist Du Schon” and then finished with Midler doing a soulful, passionate, and heartbreaking rendition of TLC’s “Waterfalls.” “Some people rescue animals, I rescue old songs” said a Midler clearly influenced by the strength and power of those classic hits. 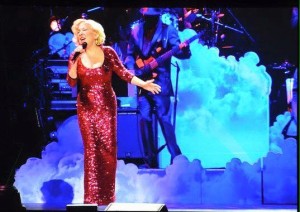 Gearing up the self deprecating humor, Midler then had the Harlettes chase her around the stage with an oxygen tank and a red rolling couch shaped like a giant pair of lips. With this highly theatrical production, Bette collapsed on the couch to ponder contemporary celebrity culture.  “Butts have kicked Boobs to the curb” she shrieked. “We have gone from do these jeans make my butt look big to do these jeans make my butt look big enough?” “We are so starved for entertainment. It’s no wonder people are taking pictures of their food!” If you cannot beat them, join them. In a hysterical bit, Midler exclaimed “I could kick myself for not having the brains to monetize my sex life!” and then treated the audience to hysterical photo images of her indisposed with several high profile men through the years. Of Richard Nixon she lamented “Don’t laugh. Why do you think they called him Tricky Dick?”  With Bruce Jenner  she clamored “Ah Caitlyn.  We watched Beaches and then painted each other’s toes.” Finally with the entire Blackhawks hockey team, she boasted “they sure can PUCK!” “Remember when people were afraid of being followed? Now they’re devastated when they’re not!” After tickling our ribs, Midler returned to song with stunning renditions of  “I Think it’s Going to Rain Today” fervently singing of the triumph of “Human Kindness.” 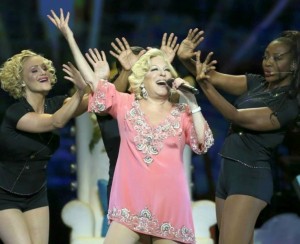 With a quick costume change, Midler emerged next as Winnie Henderson, the lead sister from the Disney Cult Halloween Classic Hocus Pocus. Joined by two Harlettes backing as the other two sisters, the trio offered up a rousing rendition of the Nina Simone song “I’ve Put A Spell On You.” Adding a clever mid-song curse, Midler cracked “I will take all the money you made on the Hawks, and bet it on the Cubs!” Another quick change saw Midler and the girls emerge in Vegas showgirl bird suits to sing “Bird in the Hand” and for Midler to rapid fire tell a string of raunchy Sophie Tucker jokes about “My boyfriend Ernie” and “Clementine” close in tow.  Most of the jokes were peppered with four letter words starting with “F” so lets just say for the next five minutes there was “Chaos at the Club Canary!”  During the final quick change the audience was treated to a mock award show In Memoriamsequence dedicated to the recently passed character,  Delores Delago,  the wheelchair rolling mermaid character Midler has played on stage for years.  Set to the tune of “The Glory of Love” the torch was passed.  Rest in peace Delores. 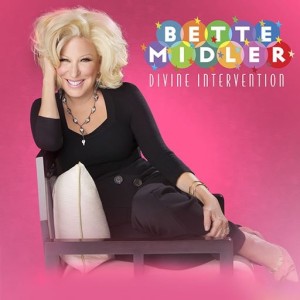 The final segment of the show was all music. Backed by 14 live musicians and wearing a body hugging, cleavage bearing, wine color sequin gown,  proving she is still every inch a star, Bette wowed the crowd with a raucous Rolling Stones cover “Beast of Burden” delighted with the understated Ella Fitzgerald cover jazz standard “Spring Can Really Hang You Up The Most” and melted all of our hearts with hits “The Rose” and “From a Distance.” If the earlier segments proved Midler still has amazing comic timing, this last segment proved she has a soulful instrument without compare.

The deeply poignant “Stay With Me” ballad was devoted to all the people Midler has loved in the past who are “ghosts” now.  And I must confess during the encore of  “Wind Beneath My Wings,” I had to wipe away a tear. “This is for you” she whispered.   “You gave me and my family such a  wonderful life.  The greatest life anyone could imagine.” Bette, you returned that favor magnificently by gifting your fans affecting classics that have formed the soundtrack to our lives.  Never one to end on a ballad, Midler and her entire team again wowed with a spirited romp through “Boogie Woogie Bugle Boy” that got all the audience on their feet.  Simply divine, Bette!