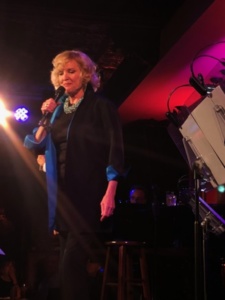 Michael Feinstein and Christine Ebersole are beyond consummate performers, they are the keepers of the American Songbook, keeping it fresh and alive. When these two experts get together these songs sound contemporary and new, yet retain their impeccable craftsmanship. Do not miss this sensational evening. 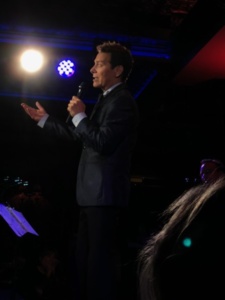 Michael Feinstein, is known for being the Ambassador of the Great American Songbook. They began this run back in July, returning to encore performances at the club that bears his name. 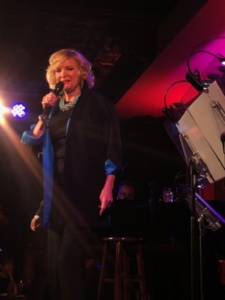 Starting with “Let’s Get Away from It All” by Matt Dennis & Tom Adair, Michael & Christine, welcomed the audience to their brand of stylings. The song segue into “Where or When” from Babes in Arms to “I’ve Got You Under My Skin” from “Born to Dance” by Richard Rodgers & Lorenz Hart and Cole Porter.

Michael took to the stage to bring a rarely heard “Yankee Doodle Blues” to life, by George Gershwin, Bud De Sylva & Irving Caesar and “Wish You Were Here” by Harold Rome. I loved the melting of  into Carole King’s “So Far Away”. It was nice to hear the crooner sing such a contemporary song where the lyrics were so heartfelt.

Back together again, the two talked and sang about missing home with “Why Don’t We Try Staying Home” by Cole Porter.

Then Christine blew the house away with “On the Atchison, Topeka and the Santa Fe” from “The Harvey Girls” by Harry Warren & Johnny Mercer. It was so easy to see why Christine has won two Tony Awards for Best Actress in a Musical (42nd Street and Grey Gardens). Most recently she was nominated for a Tony Award for her acclaimed performance in War Paint and would have won had the Divine Ms. M not decided to do Hello Dolly.

With Ted Firth on piano, the phenomenol Mark McLean on drums and Phil Palombi on Bass, this duo was well accompanied.

Christine followed that up with a comedic “Monotonous” from New Faces of 1952. This gleeful tune was written by June Carroll & Arthur Siegel, brought out the Eartha Kitt purring and inflections.

Michael returned with “Rhode Island Is Famous for You” by Arthur Schwartz & Howard Dietz and a fabulous arrangement of “Lullaby of Broadway” from 42ndStreet by Harry Warren & Al Dubin.

Repeating the song that won her a Tony, Christine lapsed into the title show from 42ndStreet by Harry Warren, Al Dubin & Johnny Mercer. She soared on Noël Coward’s “Matelot,” again a rarely heard song.

Feinstein brought out the plaintiff’s longing in Cy Coleman‎ & Dorothy Fields ballad from Sweet Charity “Where Am I Going”.

Ending the traveling evening up was Noel Coward’s “Sail Away” and the title song for the evening “Two for The Road” by Henry Mancini and Leslie Bricusse.

Surprisingly enough the best part of the evening, was the arrangements. They were spectacular. I am sure Michael collaborated with the brilliant Ted Firth and the result is musical heaven.

You have until September 3rd to bask in this award winning combination, that is sure to have you purring in musical delight.

Happy 100th Birthday Leonard Bernstein With Kristin Chenoweth
Who’s Your Baghdaddy, or How I Started the Iraq War Gets Cast Album