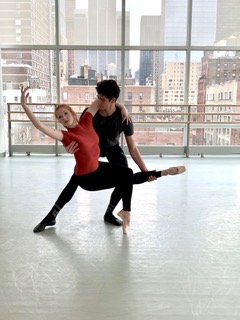 Art Directors Guild award-nominated designer and illustrator Carl Sprague will design the set to Tom Gold’s Blind Revelry (2018), which will have its New York City Premiere during the 2019 spring season of Tom Gold Dance, Wednesday, April 3 and Thursday, April 4, at The Kaye Playhouse at Hunter College. Also on the Company’s annual spring program are Gold’s Significant Strangers (World Premiere) and a revival of his Counterpoint (2017).

On Blind Revelry, Sprague, who has led or assisted in the set conception or design of more than 30 feature films, including those of Steven Spielberg, Nora Ephron, David Mamet, and Wes Anderson, will help reimagine the chance encounter of Dionysus and Ariadne on the island of Naxos in the gritty, cabaret underworld of the 1920s and 1930s. Marlene Olson Hamm is designing the period-inspired costumes. Former New York City Ballet lighting director Penny Jacobus is the lighting designer.

“Collaboration is a Tom Gold Dance hallmark,” notes Gold, the Company’s Founder and Director. “We are excited to partner with Carl, whose film and stage design experience is so extensive, as we bring Blind Revelry to New York. Together with Marlene and Penny, as well as our wonderful dancers and the two pianists who will play Concertino, Carl will help us evoke the feel of a full theatrical production around the mythological story from which Blind Revelry is drawn in a more contemporary setting.”

A 2018 commission of the Isabella Stewart Gardner Museum in connection with the restoration of its Dionysian-themed Farnese Sarcophagus, Blind Revelry is set to Stephen Sondheim’s rarely heard Concertinofor two pianos. Sondheim composed Concertino in 1949 while he was a student at Williams College. Until 2001, when it was rediscovered and presented as an orchestral arrangement, Concertino had never been performed publicly. In Blind Revelry, Gold will use a live accompaniment of the original two-piano version.

The World Premiere Significant Strangers is set to a selection of Leonard Bernstein’s Anniversaries for solo piano, also to be performed to live accompaniment. Counterpoint, a pas de deux in four movements to Steve Reich’s New York Counterpoint and Nagoya Marimbas, premiered at the Gerald W. Lynch Theater in 2017.

The mission of Tom Gold Dance is to bring the past, present, and future of classical dance to audiences in New York and around the world. Founded in 2008 by former New York City Ballet soloist Tom Gold, Tom Gold Dance aspires to the highest level of artistry expressed through a traditional classical dance vocabulary, including in more than a dozen works by Gold, envisioned for and set directly on the Company. Tom Gold Dance performs regularly in New York City, and has traveled to France, Spain, Italy, Bermuda, Israel, Cuba, and Bulgaria. Company highlights include four consecutive summer appearances in the Berkshires, and presentations of Gold’s adaptation of November Steps at The Solomon R. Guggenheim Museum, as well as at Fondazione Palazzo Albizzini Collezione Burri in Città di Castello, Italy, and the Guggenheim in Bilbao, Spain. Tom Gold Dance celebrated its 10th anniversary in 2018, launching its inaugural fall season this past November with the New York City Premiere of Gold’s Apparatus Hominus, originally staged outdoors at TurnPark Space in West Stockbridge, MA. Learn more at tomgolddance.org.

Internationally recognized dancer, choreographer, and instructor Tom Gold is the Founder and Artistic Director of Tom Gold Dance. A 2016 National Choreographers Initiative participant, Gold has created original works for his eponymous company, as well as for Vassar College, the Bermuda Arts Festival, Oregon Ballet Theater, the New York City Ballet Choreographic Institute, St. Louis Ballet, and many other dance academies, companies, festivals, television, and special events, including the Macy’s Thanksgiving Day Parade, the Bravo series Odd Mom Out starring Jill Kargman, and the New York City Fringe Festival for which he won the 2016 award for Overall Excellence for his work in The Joey Variations: A Play With Dance. A 21-year member (1987– 2008) of New York City Ballet where he rose to the rank of soloist, Gold is the choreographer and performer of the 2wice Arts Foundation’s DOT DOT DOT, an interactive iPad application by Abbott Miller of Pentagram.

My View: Dancing The Night Away at the Dancers in Transition Gala
Ben Vereen Comes To Dizzy’s at Jazz at Lincoln Center