Do You Feel Anger? No I am More Disturbed at Where Humanity is Going 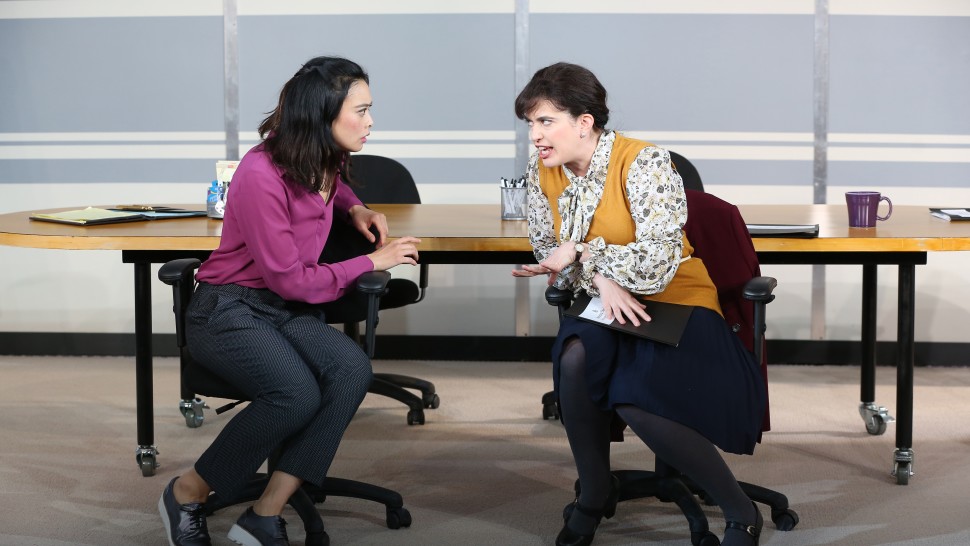 Do You Feel Anger? No I am More Disturbed at Where Humanity is Going

You will leave Mara Nelson-Greenberg’s “Do You Feel Anger?,” scratching your head. This outrageously disturbing “comedy” shows just how masculinity is now thought of as completely toxic and inconceivable, but also how women sell out themselves and others in order to accomplish their own goals.

Set in a conference room at a debt collection agency, Sofia (Tiffany Villarin,) has been hired to teach the employees empathy due to their unnatural amount of costumer complaints. First to enter the room is Eva (Megan Hill), who seems a little off kilter with her exuberant chatter. In between nonsense we learn she is repeatedly being mugged in the kitchen and the sexual harassment that she endures if she does not have a boyfriend. It is to the point that she willing to except men whose names she can’t remember and are serial killers.

Next in to greet Sofia is the boss for this company, the genuine cluelessness Jon (Greg Keller). He thinks empathy is a type of bird?. He keeps going on about on nonreciprocal oral sex and Sophia shares her father’s e-mail, where he talks about this same want, as he informs his daughter out of the blue that he has another family.

Suddenly like cold water being thrown onto the scene, comes Howie (Justin Long) and Jordan (Ugo Chukwu). These “good ole boys” have the maturity of two adolescent boys. Their inappropriate humor, and lack of humanity, show the offensive sexist antics of this office. Their terrifying camaraderie is heightened by vulgar ‘jokes’ about women and no holds bared sexual harassment. They have driven one co-worker to the bathroom with a nervous breakdown and are about to send Eva there as well. They are so out of touch with real emotions that they crucify real language and their words become absurdist.

Enter into this mix a 130-year old man (Tom Aulino) that Eva is dating whose anger over her breaking up with him has lead him to blow up the office. In the meantime Is Sofia’s mother (Jeanne Sakata) keeps calling and needing her daughter support over this marriage that has been devestatedly revealed to be false. Instead Sophia ignores her mother and supports her father, thus betraying and hurting another women. There is also Janie, an employee who went to the ladies’ room and never came back.

Ms. Hill’s performance and character seems the most well written. We see her comic portrait of a woman who men have used and abused since childhood. Now trapped into taking what they shell out, what she was not prepared for was Sophia to sell her out. Ms. Villarin plays the eternal good girl, determined to succeed despite the cost to her soul or her morals.

Margot Bordelon, direction doesn’t help the production, but Laura Jellinek’s s\et does show a surprisingly dream like true towards the end.

Ms. Nelson-Greenberg absurdist writing will be admired by many. Her ridiculously exaggerated situations would be hilarious if, they didn’t show humanity at such a horrible point. Though I was laughing first at the scene with Eva, I stopped when I realized how disturbingly off kilter they were. The satiric portraits are stretched thinned at times it feels like a “Saturday Night Live” sketch gone array. Seen at the Humana Festival in Louisville last year, I am surprised that this play has gone this far.

In the end woman are no better than men. They sell out thier own kind just to fit in. Do I feel anger at that…..yes I do!