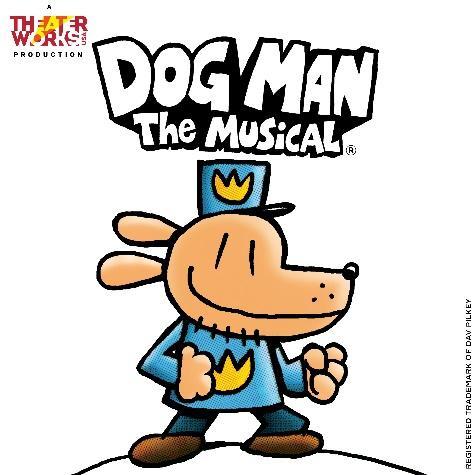 Dog Man: The Musical is a hilarious and heartwarming new production following the chronicles of Dog Man, who with the head of a dog and the body of a policeman, loves to fight crime and chew on the furniture. But while trying his best to be a good boy, can he save the city from Flippy the cyborg fish and his army of Beasty Buildings? Can he catch Petey, the world’s most evil cat, who has cloned himself to exact revenge on the doggy do-gooder? And will George and Harold finish their show before lunchtime?? Find out in this epic musical adventure featuring the hilarity and heart of beloved characters from Dav Pilkey, the creator of Captain Underpants.

Dog Man: Brawl of the Wild, the latest title in Dav Pilkey’s Dog Man series, received a staggering 5-million-copy first printing and debuted at #1 overall on the USA Today, New York Times, and Wall Street Journal bestseller lists. Published by Scholastic under its Graphix imprint, Dog Man received multiple starred reviews and was an instant bestseller, appealing to kids and critics alike. The series has more than 23 million copies in print to date and translations available in 30 languages. Dog Man: For Whom the Ball Rolls, the highly anticipated new installment in the series, will be published worldwide on August 13, 2019.

TheaterWorksUSA has led the Theater for Young and Family Audiences movement in New York City and across North America for over half a century. Since 1962, the 501(c)3 not-for-profit has captured the imaginations of 100 million new and veteran theatergoers with an award-winning repertoire of over 130 original plays and musicals. Acclaimed alumni include Kristen Anderson-Lopez and Robert Lopez (Disney’s Frozen), Jerry Zaks (Hello, Dolly!), Benj Pasek and Justin Paul (Dear Evan Hansen), Daphne Rubin-Vega (Rent), and Kathleen Chalfant (Angels in America). To learn more, visit www.TWUSA.org.

DAV PILKEY (creator of Dog Man) As a child, Dav Pilkey was diagnosed with dyslexia and ADHD. Dav was so disruptive in class that his teachers made him sit out in the hall every day. It was in the hallway in second grade where Dav created his own original comic books featuring characters that eventually became Dog Man and Captain Underpants. The Captain Underpants series has more than 80 million copies in print worldwide and has been translated into more than 28 languages. In 2017, DreamWorks brought the character to the silver screen in the feature film adaptation Captain Underpants: The First Epic Movie and Netflix is now streaming The Epic Tales of Captain Underpants TV show. Dav has gone on to create award-winning and bestselling books for children including the Dragon series, the Dumb Bunnies series, Dog Breath, and The Paperboy, which won a Caldecott Honor.