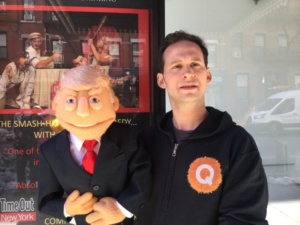 The off-Broadway production of Avenue Q meet the press yesterday afternoon to commemorate World Puppetry Day. Puppet President Donald Trump and Hillary Clinton joined Trekki Monster, Lucy the Slut, Yellow Bear, Rod, Mrs. T and Brian to answer questions. Avenue Q to celebrate is offering from March 20-26the a weeklong $30 ticket offer. Tickets will be available for that price when patrons are accompanied by a puppet at the box office one hour before showtime. 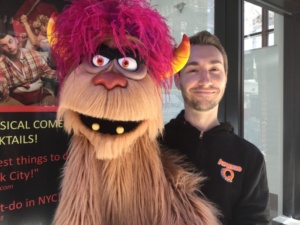 World Puppetry Day was first celebrated in 2003 and sanctioned by the Union Internationale de la Marionette. It was initiated by Iranian puppet artist Javad Zolfaghari and is marked by puppet lovers around the world each year. 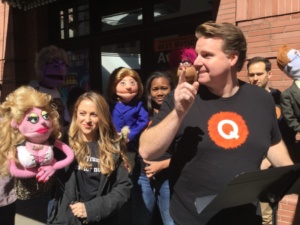 Avenue Q, written by Robert Lopez, Jeff Marx, and Jeff Whitty, opened off-Broadway at the Vineyard Theatre on March 20, 2003, before moving to Broadway’s John Golden Theatre, where it officially opened on July 31 of that year. The show went on to win three 2004 Tony Awards: Best Book, Best Score, and Best Musical. The Broadway production closed on September 13, 2009 and reopened off-Broadway at New World Stages on October 21, 2009. 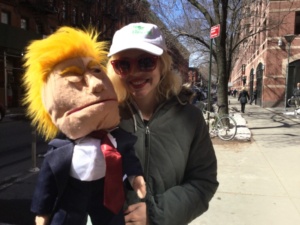 Even a 2nd Trump puppet showed up!