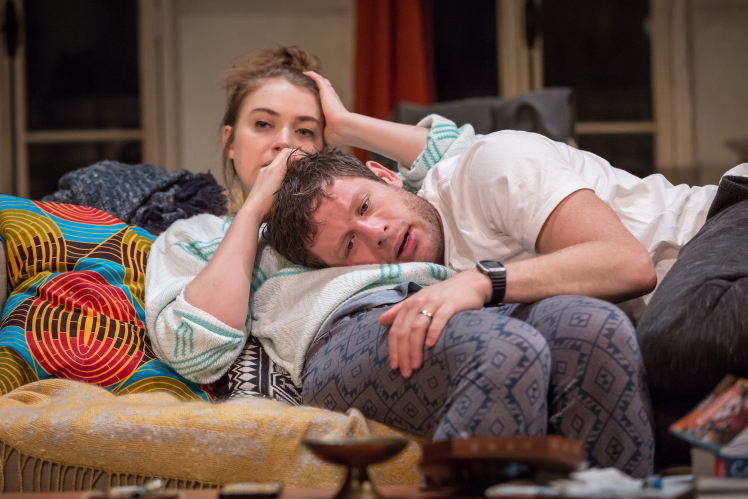 Ross
At first I envied these two. Living abroad, in Paris of all places, young, married and in love. Looked pretty good to me, at least in the first minutes of Amy Herzog’s devastating play, Belleville, but then the seams started to show the strain of this exact privileged life. This life that, at first resembled bliss was being pulled apart. Unknown stresses started to add up, and like a fine woven sweater, this piece of warmth wasn’t going to be able to withstand the tension it was under. Eventually, the pulling would unravel it all. The question I guess that remained, is what would it all look like in the end.
These two actors, directed with precision by Michael Longhurst (Royal Court/Broadway’s Constellations) have the difficult task of being everything that the term ‘millennials’ represents while also somehow pulling us into their complicated and very entitled lives.  Married young, possibly for the very awful and only reason of giving a dying mother a wedding of a daughter, Imogen Poots (West End’s Who’s Afraid of Virginia Woolf?) as the struggling Abby and James Norton (Royal Court’s Posh) as the complex Zack are exacting in their depiction of these two.  Both immensely difficult but loving, they play off each other’s dysfunctions like pros, swerving and dodging emotional outbursts and passive aggressiveness with aplomb.  On that close-quartered stage, designed to perfection by Tom Scutt (King Charles III) with lighting by Natasha Chivers (Playhouse/Hudson’s 1984), the realness of that roller coaster ride of an evening that includes drunkenness, blood, and vomit is without a doubt one finely staged interaction (movement director: Imogen Knight; fight director: Kate Waters). Their complete investment in their childish fantasy of a relationship is both technically impressive, and poetically powerful to behold.
Balancing out these two narcissistic characters Herzog gives us, as their landlords, a kind and engaging Senegalese-Frenh couple, thrust into the perpetual drama of these two oblivious creatures. Played magnificently by Faith Alabi (Print Room’s Trouble in Mind) and Malachi Kirby (Young Vic’s The Realness) they ingest some human compassion into the mix, although the real power of these two come in the final moments of Herzog’s play, when these two summarize in French what true coupledom really looks like. Simply and solidly.
Originally produced at the New York Theatre Workshop in March, 2013, Belleville delicately manages to walk the tightrope between condemnation and celebration. The second to last scene struck me as overly simplistic and detached when I’m guessing the goal was the opposite.  Herzog always seems to wow us with a quiet emotional engagement as she did in the beautifully crafted Mary Jane, earlier this year at the NYTW, rather than knock us over the head with forced melodrama like she does here.  The fate of these two millennials feels a bit too broad to make the final punch hurt as much as it should, but the vulnerability and the desperation to appease, even when stitched inside of lies stacked on top of lies rings completely true.  That is what we are left with; the nagging feeling of a generation struggling to rise above their own messiness and selfishness, attached but detached, living a fantasy life, this time in Paris.
Related ItemsAmy HerzogBellevilleDonmar WarehouseImogen PootsJames NortonNewnew york theatre workshopRoss
Out of Town