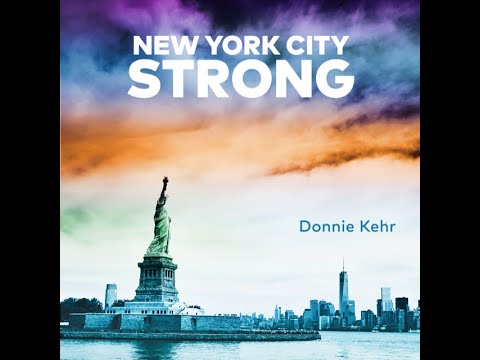 Actor, singer and songwriter Donnie Kehr  (Jersey Boys, The Who’s Tommy) kicked off Memorial Day Weekend with the release of  his new single ‘New York City Strong’ available on iTunes, Spotify, YouTube and anywhere you stream music.  Kehr says “this song is my love letter to the city of New York and a “Thank You” to all the Essential Workers and First Responders  during the Covid19 crisis.”

Julie Jacobson, a Spanish teacher at Wheatley School in Long Island, took to social media to share Kehr’s video for all her students to see. One of those students happened to be sophomore Maia Cale, who was working on a social studies assignment trying to identify a music artist who appeared to have a deep understanding of the current world during a pandemic.  After viewing Kehr’s video, Maia knew instantly that Donnie Kehr’s ‘New York City Strong’  was the answer she had been searching for.  Maia goes on to say  “music is definitely a fantastic way to relieve stress and anxiety; and a song like “New York City Strong” is definitely needed and is so nice to have during a time period like this and we see a light at the end of the tunnel during this difficult time.”

Maia goes on to say “I think this song really relates so well to our current time period. For example, it just shows, from the rhythm to the lyrics and to the images, how strong our city is even through these tough times. It also helps emphasize how we will get through this TOGETHER! I love how Donnie Kehr included students, actors and actresses, as well as first responders and just everyday people going through this. I think that this song should be shared with everyone to show how amazing and powerful New York City truly is. Doctors and first responders all smiling and dancing, which just really shows that we will get through this and we will see a light at the end of the tunnel. Even in a few years, hopefully when this is all over, this song and video will be a good reminder of the pandemic we went through in 2020 and how because we all stuck together and helped each other out, we got through it. Just to sum up, I think music is definitely a fantastic way to relieve stress and anxiety; and a song like “New York City Strong” is definitely needed and is so nice to have during a time period like this.”

Kehr is asking for everyone to “Spread the Love, NOT the Virus” by downloading his new song on iTunes or make a tax deductible donation to the NYC STRONG INITIATIVE  started by The PATH Fund, Inc.® , which Kehr is the co-founder of with producing partner Cori Gardner (Rockers On Broadway); . Proceeds from the download of the single and all donations made through the NYC STRONG INITIATIVE will directly benefit the World Central Kitchen and NYC’s Covid19 Emergency Relief Fund. All donations of $20 + between now and May 31 will receive a FREE NYC FACE MASK!

World Central Kitchen is a not-for-profit non-governmental organization devoted to providing meals in the wake of natural disasters. Founded by celebrity chef José Andrés.  World Central Kitchen’s method of operations is to be a first responder and then to collaborate and galvanize solutions with local chefs to solve the problem of hunger, immediately following a disaster.   Additionally, funds will go to NYC’s Covid19 Emergency Relief Fund, started by Mayor de Blasio and his office to provide resources and financial support to Health care of  workers and essential staff, Local small businesses, displaced hourly workers, including” immigrant workers and Families, youth, and vulnerable New Yorkers.

The PATH Fund, Inc.® is a nonprofit organization dedicated to supporting arts education and training organizations with scholarship and program funding. Additional support to NYC’s thriving arts community by working with aspiring writers to develop new works of music and theater. Since the inception of PATH Fund in 2007, the PATH Fund has raised over a half million dollars for performing arts charities. For more information or to donate: www.Thepathfund.org

Suzanna BowlingJune 27, 2022
Read More
Scroll for more
Tap
Blast From The Past: John Tartaglia and Ars Nova
How Are We Coping With Self Isolation: Insight From Around the Country And The World With Jon Hammond