Donny and Marie Osmond – Impeccable at the Paramount

Donny and Marie Osmond – Impeccable at the Paramount 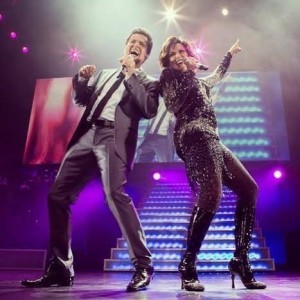 Returning to the lovely Paramount theater in Aurora, Illinois were the most famous brother and sister act in popular culture. Yes, those adorable musical Mormons, Donny and Marie Osmond brought their signature glitz, hits and wits to entertain. Blending a classic lexicon of country and pop hits, the charisma they both honed on their 1970’s ABC network variety series and the polish of their current status as Las Vegas headliners, this dazzling duo was here to amuse and entertain. Marie demonstrated her gravity defying figure in an array of bedazzled costumes and her strong and versatile voice, while Donny, regrettably, was a bit hoarse and visibly under the weather, but as they both stated “the show must go on.”  This energetic team put on the most enjoyable 100 minute celebration of  contemporary hits, Broadway standards, and of course, many of their classics. It was quite refreshing to sit in an audience that crossed multiple generations and cultures, all who left with enormous smiles on their faces. 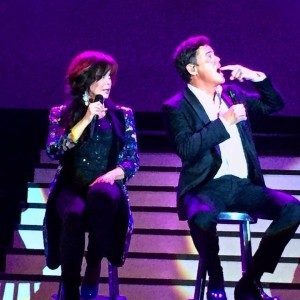 The show opened with Donny and Marie at the top of a stair case, center stage, belting out  “It Takes Two.” Donny, with that bright, white smile that set so many teen-aged girls hearts a flutter a few decades ago, and Marie in a black beaded miniskirt with black stiletto heeled boots. Their energy didn’t stop as they continued singing a melody of popular party songs including  Pink’s “Get the Party Started,” Martha and the Vandellas’ “Dancing in the Streets,” Eddie Floyd’s “Knock on Wood” and wrapping up this first high energy set with Sly & the Family Stone’s “I want to take you higher.” There is a reason Donny won his round of “Dancing with the Stars” and Marie came in third for her respective season. This ongoing joke and display of good natured sibling rivalry, repeated throughout their revue. To no matter, these two have more energy and showmanship then artists half their age. 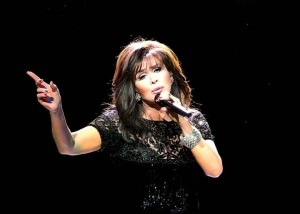 After a short video montage reminded the audience of every magazine on which Marie graced the cover, as well as a video clips of her singing back in her teens, Marie took the stage in a voluminous, floor length ball skirt, adorned with purple flora and emerald green  sequin top to sing her classic “Paper Roses.” Quickly discarding the skirt and adding a guitar adorned with a silver sequin “M” she then rocked out to a medley of “Walk this Way” by Aerosmith and “These Boots Are Made For Walking” made famous by Nancy Sinatra. Speaking of boots, Marie had her own custom made cowgirl boots with sequin heel detailing. This woman clearly never met a sequin or shoe she didn’t covet, then add to her vast collection. Dazzling to the eyes as well as the ears, her voice has only improved with age. I say this about both of them, but Marie may win the round of who has the better pipes. 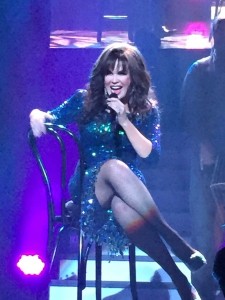 She chatted with the audience, between numbers, seated close to the stage. Conversing with a 16 year old girl in the third row, Marie quipped “Do you know who I am?” followed up with a quick “I’m Cher.” The joke is not far off, as Marie has clearly benefitted from Cher’s pioneering efforts with the plastic surgeon. Thank goodness that voice has remained unscathed.  Downing an entire bottle of water between songs, Marie riffed “You thought Mormons couldn’t drink!” Next, selecting a volunteer  from the audience, Marie serenaded him with a rendition of Patsy Cline’s “Crazy” having him finish with a comical Elvis riff.  She concluded her set with her latest country hit, “Music is Medicine” from her latest cd that debuted at number 10 on the Billboard Country Chart. Her video went viral and she teased “To those over 60 in the audience, going viral is not a bad thing.” 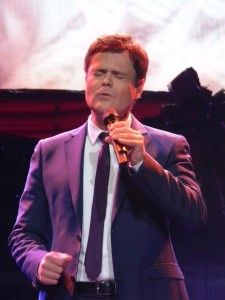 Making all the ladies in the audience swoon, Donny emerged in suit and tie to serenade them with “Celebrate,” teamed with 4 back up dancers and contemporary dance steps that would rival Justin Timberlake. Impressive for a talent pushing 60 years old! Plugging his latest cd “Donny Osmond The Soundtrack of My Life” he hinted each member of the audience would be receiving a copy, then paused and jested….. for $20 each at the swag table in the lobby. Discussing the amazing influence Andrew Lloyd Webber had on his career, appearing 2,000 times in Joseph and the Amazing Technicolor Dreamcoat, Donny lamented on the loin cloth his character had to wear. He teased the other performers on stage tried to pull it off of him, held in place by just four small snaps. At this point a woman in the audience yelled “put it on.” He clearly still has “it.”  Rounding out this set, Donny celebrated hearing impaired male model, Nyle Dimarco’s unprecedented win of season 22 of Dancing With The Stars. He also joked about the look on fellow contestant Ginger Zee’s face when it was announced she came in third place. He wisecracked “My sister knows that feeling” as she also came in third way back in Season Five. 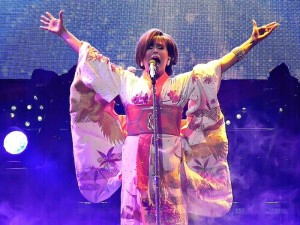 Speaking of Marie, it was her turn sing again, dressed like a Geisha, treating the audience to a spectacular opera piece, “Nessun Dorma.”  This was the first time the audience jumped to their feet at a song’s conclusion to give her a round of thunderous applause.  Marie said during the show she is lucky to have a voice that can handle so many different genres of music. While not an opera aficionado,  I was legitimately moved by this stunning and impressive operatic musical  vignette. From opera to show tunes,  a rousing  homage to Broadway was next. An artistic medium both Osmond’s have repeatedly explored, featured Marie, outfitted in a slim fitted, short, black fringe dress,  belting out a racy rendition of “All That Jazz” from Chicago and Cabaret’s title track.  After another quick costume change, it was time for brother and sister to reunite with their quartet of back up dancers, for a swinging, lively, Cotton Club influenced “Jump, Jive and Wail” from the Brian Setzer Orchestra and “Cat On A Hot Tin Roof.” Running through the audience, Donny high fived and hugged dozens of fans, while Marie kissed the balding heads of the husband’s dragged their by their wives to see the show.  With five decades of hits between them, these two are genuinely grateful for their fans and for the resurgence of their careers. Marie commented they were asked to do a “6 week show in Las Vegas” which has now just celebrated its 8th sell-out year.

The brother and sister power duo closed their show with a “I’m a Little Bit Country, and I’m a Little Bit Rock and Roll.” Smiles abound on the stage and throughout the audience.  Added to this set were their classic “Deep Purple” (Donny shared this song is his least favorite. He actually said “I hate this song” but it is hard to imagine an Osmond hating anything) “I’m Leaving It All Up To You” and “Morning side of the Mountain.” At this point, Donny’s voice was shot for the night so he did a cute lip sync to “Puppy Love” actually sung by his sister. These two are nonstop.  Donny joked their next venture should be a rap album.  Marie kidded back “I sing county. County and rap together makes…..crap.”  As they sang their final number, “May Tomorrow Be a Perfect Day,” the audience reveled in our collective experience of a near seamless show. Entertainers doing what they do best, and having as much fun doing it as we had watching it.

If you get the opportunity to see Donny and Marie on tour, my advice to you is go. Family friendly, joy filled, a positive energy celebration of 50 years worth of music. Marie’s collection of lush costumes were a dazzling array of sequin and beaded fabrics designed to show off her toned body. “Thank you Nutri-system” she joked as she thanked the sponsor of her current commercial endorsement.  Donny and Marie Osmond at the Paramount was a smile inducing, glitter dipped festival of music and fun. I cannot think of higher praise than that, regardless of  whether you are a little bit country or a little bit rock and roll. The Osmond’s had something for everyone.

Donny and Marie Osmond at the Paramount Theater Concert May 27, 2016