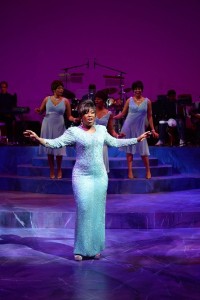 Classy, lovely and elegant are all adjectives that certainly describe the exquisite chanteuse, Dionne Warwick. My first real exposure to her was as hostess to the late 1970’s music countdown show, Solid Gold, so I certainly had some homework to do in playing catch up! Continuing its successful 40th Anniversary Season, the Black Ensemble Theater presents Don’t Make Me Over In Tribute to Dionne Warwick a winning biographical musical revue written by BET Founder Jackie Taylor and directed by Rueben Echoles. Including hits spanning from the early sixties to the late eighties, Dionne quietly shattered glass ceilings as a crossover artist with her signature soft, feminine, and velvet smooth vocal styling’s. Proficient in Gospel, R&B, Soul and Pop Music, Dionne became a six time Grammy Winner, People’s Choice Award recipient, American Music Award honoree as well as the United States Ambassador of Heath, appointed in 1987 by President Ronald Reagan and the United Nations Global Ambassador for the Food and Agriculture Organization in 2002. Accolades aside, Dionne will always be known for her sumptuous song book, and thankfully that is celebrated, center stage, by an ensemble up to the formidable task. 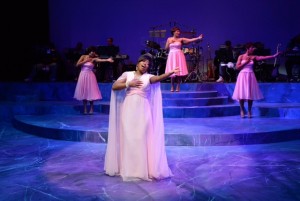 Featuring 23 of Warwick’s signature hits, the show’s mistress of ceremonies is known simply as Ms. Divine, played to the hilt by talented livewire, Alexis J. Rogers. Assisting her with the vocal heavy lifting are three additional Dionne’s;  Kylah Frye, Renelle Nichole and Rose Marie Simmons. The girl group choreography gimmick is something Dionne was not traditionally known for, but here it aids with a charming visual, setting a time and place for the audience & allowing a more organic transition from woman to woman during the show. Containing spirited and slightly over-sung renditions of Warwick’s classics, including “Walk On By,” “Don’t Make Me Over,” “Message to Michael,” “Alfie” and “Do You Know The Way To San Jose” the music certainly astounds. In-between the much revered songs, we are treated to imagined vignettes of significant moments in Dionne’s life, negotiating both the “show” and the “business” of the entertainment industry. Early on, she was part of a Gospel quartet which included her mother, Lee (Toi Overton) her sister, Dee Dee Warwick (Katrina Richard) and her aunt, Cissy Houston (Risha Tanae) future star Whitney Houston’s mother. Born in December in 1940 in East Orange, New Jersey, a young Dionne had aspirations to finish her college education and then to teach music, but instead had a global impact on the genre she could have never imagined. Warwick currently ranks among the 40 biggest hit-makers of the entire rock era, behind only Aretha Franklin as the most-charted female vocalist of all time. 69 of Warwick’s singles made the Billboard Hot 100 between 1962 and 1998 and she was the first black female artist to win a pop vocalist Grammy Award. Impressive. 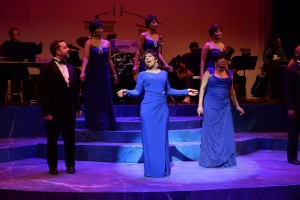 Behind her music, we are guided through the lucky breaks of Dionne’s career, including her chance encounter with composer Burt Bacharach, who when partnered with lyricist Hal David, helped pen the brunt of Warwick’s biggest career hits. Crossing over from Gospel to pop meant increased global exposer and amassed personal fortune.  “Pop singer is short for WE like your music too” her mother quipped about her crossover appeal. “I Say A Little Prayer,” “Always Something there To Remind Me” and “Then Came You” (with The Spinners) cemented Dionne as the Queen of the 1960’s pop charts. The 1970’s disco era, record label switches and a nasty breach of contract lawsuit between her and her former writing team, Bacharach and David, cooled Dionne’s career a bit. Signing with a new record label proved her professional salvation. Clive Davis, Arista Records Founder, once famously told her “You may be ready to give up the business, but the business is not ready to give up on you.” Recording soft pop hits like “Déjà vu” and “I’ll Never Fall in Love Again” brought her back to the radio, the concert stage, and found her a new generation of ravenous fans. The record was produced by Barry Manilow, no less, and while Warwick expressed concern she would sound like “Dionne Manilow,” her apprehension was for not. Manilow proved himself an inspired and impressive producer, allowing this singer to shine. Winding down her fitting tribute, the 1985 adult contemporary, Burt Bacharach and Carol Bayer Sager penned hit “That’s What Friends Are For” (with Elton John, Gladys Knight and Stevie Wonder) which raised missions of dollars for the American Foundation for AIDS Research and brought Warwick another Grammy Award. 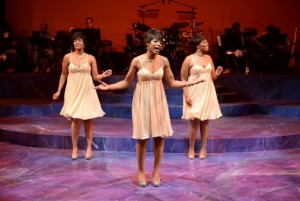 Philanthropist, artist, and activist, Dionne Warwick was respectfully paid, very well-deserved homage with this 2 hour 15 minute revue.  Musical director, Robert Reddrick and his Black Ensemble Theater Band put a more present-day, jazz influenced, spin on the original arrangements of some of Warwick’s quieter classics, I assume to keep up with the women’s resounding powerhouse vocals. While their approach is throatier and certainly showier than Warwick’s originals, everyone in the audience around me clapped, and impulsively broke into song too on the evening I attended. Some sing-a-long’s were spontaneous, some strategically planned. You have been sufficiently warned. Rueben Echoles’ costume design was easy on the eyes and high on the glamour quotient. Gowns ranged from bubble gum pink, champagne, and chartreuse to heavily beaded black & white and royal blue. Warwick herself traveled to the Windy City to attended the official press opening and was quite emotional during the curtain call. Please don’t just “Walk On By” your opportunity to relive this eclectic soundtrack, instead “Say a Little Prayer” you can score a good ticket to Don’t Make Me Over In Tribute to Dionne Warwick while you still can. 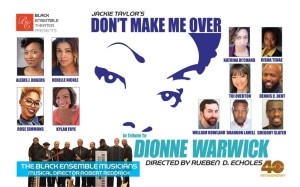 Black Ensemble Theater’s Don’t Make Me Over In Tribute to Dionne Warwick is now playing through May 15, 2016