The York Theatre Company(James Morgan, Producing Artistic Director; Evans Haile, Executive Director), dedicated to the development of new musicals and preserving musical gems from the past, will present international stage star Ute Lemper in a new one-woman presentation of Rendezvous with Marlene, a new show written and performed by Ms. Lemper based on a conversation with the legendary Marlene Dietrich and featuring some of her iconic songs. FIVE PERFORMANCES ONLY, September 18 – 22 2019 at The York Theatre Company at Saint Peter’s (entrance on East 54th Street, just east of Lexington Avenue).

Ute Lemper’s newest creation, Rendezvous with Marlene, is her very personal homage to Marlene Dietrich. For 35 years Ute has been compared to Marlene, but never formatted an entire show to celebrate this legend. Now in 2019, Ute decided to honor her with Rendezvous With Marlene, a brand-new show based on the true story of her three-hour phone call with Marlene 30 years ago, in 1988, when they both lived in Paris. The evening is a dialog between Ute and Marlene, exploring Marlene’s career and personal life from the beginning, in a timeline that eventually meets Ute’s timeline with a continuation of their parallel stories. Ute sings Marlene’s most beautiful songs and tells some captivating secrets of her life. This show will tour the stages of the world in 2021.

In this special one-woman presentation, Ute shares Marlene’s story through singing her iconic songs as the older Dietrich from all the chapters of her life, from the Berlin cabaret years to her fabulous Burt Bacharach collaborations, with Lemper singing songs as herself that were her inspiration as a young aspiring singer/actress. Songs include “Where Have All the Flowers Gone?,” “I’ve Grown Accustomed to Her Face,” “Blowin’ in the Wind,” and “Just a Gigolo.”

Rendezvous with Marlene received critical acclaim following a presentation in London this past June. “Five Stars for Ute Lemper. We see both Dietrich and Lemper at the top of their game, for it becomes impossible to discern where one ends and the other begins. La nouvell Marlene, indeed,” shouted the Musical Theatre Review. While BroadwayWorld, UK stated, “The show is an incredible journey through Marlene’s life. It’s a huge thrill to see and hear Ute up close in so intimate a space, and to witness her evocation of Marlene with such skill and humanity.” “A feast for fans, like a fine wine Lemper improves with age and has grown into this material. It should not be missed,” said The American.

Tickets for Rendezvous with Marlene are priced at $40. York Member tickets are priced at $35 with York Plus! Member tickets at $30. Tickets may be purchased by calling (212) 935-5820, online at www.yorktheatre.org, or in person at the box office at the York Theatre at Saint Peter’s (Citicorp Building, entrance on East 54th Street, just east of Lexington Avenue), Monday through Friday (12:00 p.m. – 6:00 p.m.). Senior Rush tickets are available in-person beginning one hour prior to performances for $20 cash only. Student tickets can be purchased anytime in advance at the box office during regular box office business hours. Limit one ticket per valid student ID and tickets are subject to availability. Student Rush tickets are $20.00 cash or credit. The York Theatre also offers $25 tickets for guests aged 35 years and under. Groups of 10 or more, contact Great White Way at 212-757-9117, or GreatWhiteWay.com.

Ute Lemper’s career is vast and varied. She has made her mark on the stage, in films, in concert, and as a unique recording artist on more than 30 CDs over her career. She has been universally praised for her interpretations of Berlin cabaret songs, the works of Kurt Weill and Berthold Brecht, the chansons of Marlene Dietrich, Edith Piaf, Jacques Brel, Léo Ferré, Jacques Prévert, Nino Rota, Astor Piazzolla, and many others and also her own compositions, as well as her performances in musicals and plays on Broadway, in Paris and Berlin, and in London’s West End.

In 2015, Ute completed her composition The Nine Secrets to the words of Paulo Coelho, based on his book Manuscript Found in Accra. This creation was released on CD in fall 2015 on the label Edel in Germany, Switzerland and Austria, and on the Steinway Label internationally in February 2016. She recorded the song cycle in New York with some of the finest musicians from around the world. Instruments used during recording include exotic ancient Arabic guitars, shepherd flutes, rebec, and percussions. The one and only Gil Goldstein played accordion and wrote masterful string arrangements. Ute is thrilled and honored about this collaboration with Paulo Coelho, who is one of the most important and legendary authors of our time.

While Ute has continued to perform and revive the works of Brecht and Weill, her professional theatre stage debut in a musical was in the original Vienna production of Cats in the roles of Grizabella and Bombalurina. She went on to play Peter Pan in Peter Pan (Berlin) and Sally Bowles in Jerome Savary’s Cabaret (Paris), for which she received the Moliére Award for Best Actress in a Musical. She played Lola in The Blue Angel (Berlin) under the direction of Peter Zadek, and Maurice Bejart created a ballet for her, La Mort Subite (Paris). Ute also appeared in many Weill revues with the Pina Bausch Tanztheater, and she created the part of Velma Kelly in Chicago in the West End, for which she was honored with the Laurence Olivier Award, and moved to the Broadway production after one year to receive the American Theatre Award.

Ute was nominated for a Grammy for her CD Paris Days/Berlin Nights with the Vogler String Quartet and Stefan Malzew on Piano. It is a beautiful semi-classical recording, featuring songs between love and war composed by Hanns Eisler, Kurt Weill, Jacques Brel, Edith Piaf and Astor Piazzolla, as well as folk songs in Yiddish and Russian.

Her celebrated recordings for Decca include Ute Lemper Sings Kurt Weill(Vols. I and II), Three Penny Opera, The Seven Deadly Sins, Mahagonny Songspiel, Prospero’s Books (Michael Nyman), Songbook (Michael Nyman/Paul Celan), Illusions (Piaf/Dietrich), City of Strangers (Prévert/Sondheim), and Berlin Cabaret Songs (German and English versions). She was named Billboard Magazine’s Crossover Artist of the Year for 1993-1994. In early 2000, Decca / Universal Music released Punishing Kiss, featuring new songs composed for her by Elvis Costello, Tom Waits, Philip Glass, and Nick Cave. Her following release on Decca, But One Day, features new arrangements of Weill, Brel, Piazzolla, Heymann, and Eisler songs, as well as the first recordings of her own compositions, for which she wrote both lyrics and music. She also recorded Crimes of the Heart, Life Is a Cabaret, and Ute Lemper Live for CBS Records, and Espace Indecent, Nuits Etranges, and She Has a Heart for Polydor. She recorded a live album and DVD,Blood and Feathers, at the Café Carlyle, one of New York’s hottest Cabaret stages. It was released worldwide on DRG/Koch Records and Edel Records in Europe. Her album Between Yesterday and Tomorrow is entirely self-penned music and lyrics and Ute enjoyed coproducing all of her songs together with her partner in life and work, Todd Turkisher.

Ute was born in Münster, Germany and completed her studies at The Dance Academy in Cologne and the Max Reinhardt Seminary Drama School in Vienna. She lives in New York with her four children, Max, Stella, Julian and Jonas. 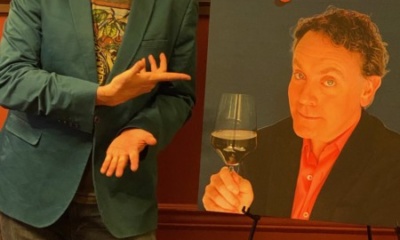