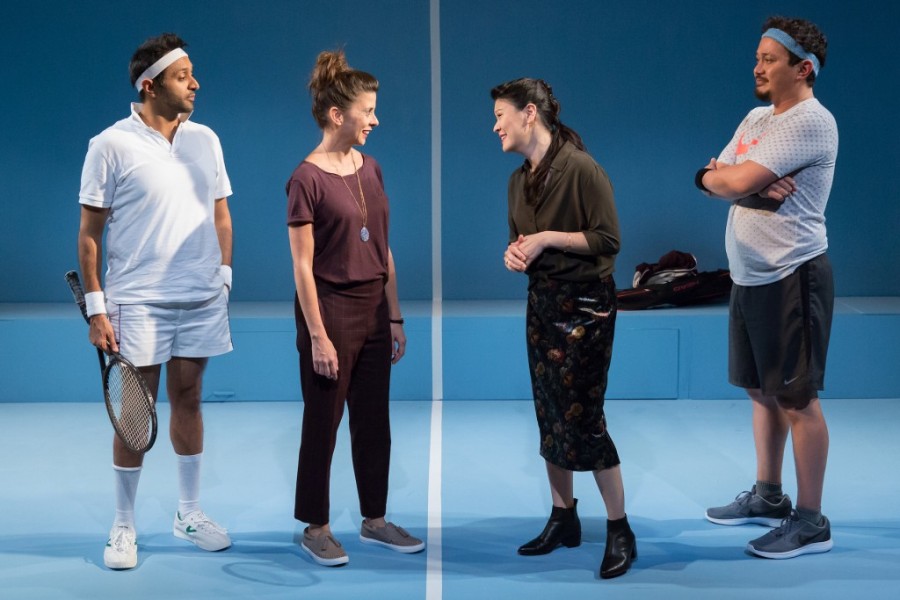 Don’t You Say a F**king Word

Don’t You Say a F**king Word 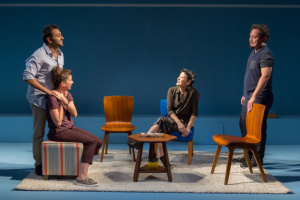 Don’t You Say a F**king Word by Andy Bragen is part tennis match, part relationship slice of life.  Kate (Jennifer Lim) and Leslie (Jeanine Serralles) are college buddies who run into each other after many years and introduce their current love interests Brian (Bhavesh Patel) and Russ (Michael Braun).  These two gentlemen begin a bro-love when they discover their mutual love for tennis that turns into an almost fatal-attraction obsession with each one trying to outdo the other.  The ladies commiserate and support from their living rooms until they decide to get emotionally involved, only to realize that their men thrive on the competitiveness and their anger is only for the field. Points to the ladies for supporting their men, (who end up turning on them), but then again the truth always lies somewhere in the middle. Luckily both relationships survive beyond the ill-fated pairings and this lobbying of tennis-laden interaction does come to an end. 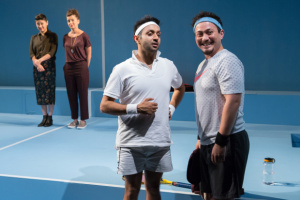 Staged in simple blue box lined with white masking tape to represent a tennis court, (creative kudos to set designer Amy Rubin for her use of storage boxes in the back for set changes) the play unfortunately doesn’t take off until two thirds of the way through when all four characters actually sit, make eye contact and are able to communicate realistically.  Only then does the relentless spewing of dialogue settle into a natural rhythm allowing the actors to drop in some meaning for the audience to care.

This is an 80-minute play that needed to be allowed 100 minutes. Director Lee Sunday Evans sharply serves the first half of the play, aggressively switching between direct, detailed communication between the ladies and the audience and snippets of tennis match poses executed by the sportily dressed guys. Twice the dialogue refers to Brian’s athletic awkwardness and yet I did not see any of that from the well-dressed Patel’s performance.  Jeanine Serralles’ comedy chops come through, but she was forced to try too hard facially to communicate the meaning of her fast-paced lines. Jennifer Lim had moments of believability, but unfortunately there was no chemistry felt between her and Michael Braun.

If you are a tennis buff then maybe the constant scores being rattled off will be of interest to you but for the general public these rapid firing of numbers did not help build the tension of the story line that seemed to be missing an overall point.