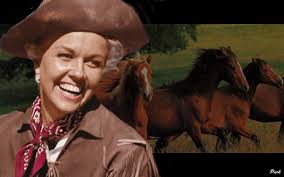 Singer, actress, animal activist and star Doris Day has died at the age of 97. Her death was announced by her charity, the Doris Day Animal Foundation, on Monday.

“She was surrounded by close friends and ‘had been in excellent physical health for her age, until recently contracting a serious case of pneumonia. Her wishes were that she have no funeral or memorial service and no grave marker”. She died at home in Carmel Valley, California.

Day wanted to be a dancer but at 12, a car she was in was hit by a train and her leg was badly broken.

Day began singing in a Cincinnati radio station, then a local nightclub, then in New York at 15. Bandleader Les Brown, changed her name to Day, after the song Day after Day. Her real name is Doris Mary Ann Kappelhoff. Her songs Sentimental Journey, Secret Love and Que Sera Sera have all been inducted into the Grammy Hall of Fame.

Day shot to fame in the 1940s and 50s in Pillow Talk, Love Me or Leave Me and The Man Who Knew Too Much, but her film career started after she sang at a Hollywood party in 1947. Day won the best notices of her career with Love Me or Leave Me, the story of songstress Ruth Etting and her gangster husband-manager. She initially balked at it, but the 1955 film became a box-office and critical success. Her last film was With Six You Get Eggroll, a 1968 comedy about a widow and a widower and the problems they have when blending their families. This turned into The Brady Bunch.

She wrote her own story in Doris Day: Her Own Story.

Day briefly dating Ronald Reagan, she married film producer Martin Melcher. They were together for 17 years. Day married four times but only had one child, Terry Melcher, who died in 2004 after battling melanoma.  Day continued working until the 80s but devoted the last portion of her life to animal rights.

A 2011 collection of previously unreleased songs, My Heart, hit the top 10 in the United Kingdom. The same year, she received a lifetime achievement honor from the Los Angeles Film Critics Association.

She is survived by her grandson, Ryan Melcher.