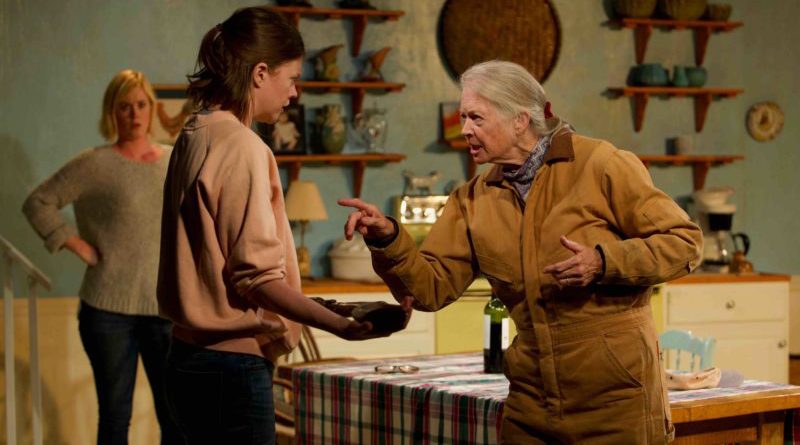 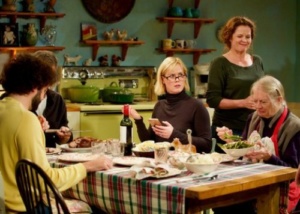 As a playwright and director, my personal mandate has always been to tell women’s stories. When I had my little theatre in Los Angeles, if a play was submitted without any female roles, I returned it, unread, to the playwrightwith a polite note explaining why.  As a producer, I hire women whenever I can. I can’t cure the inequity of generations by myself, but I can do my tiny part. I started my career in the soaps, which traditionally had women in the leads; the men were only there to marry us, torment us, or otherwise be part of OUR storylines, not the other way around. So I got spoiled. When I began to work in episodic TV and films, I found it to be very male-dominated, on both sides of the camera. As I have aged as an actress, my roles have become increasingly smaller and less interesting. As an old woman now, no one is telling my stories so I have to tell them myself. I refuse to be silenced or to let my talented sisters of a certain age be ignored. I will continue to create roles for me and my friends. We are an invisible yet still a vital and valuable part of our society. A crone, a hag, a witch. These stereotypes scare people. When did I change from being an object of desire to one of fear and scorn? It happened so insidiously, I hardly felt a thing. The problem starts in the writers’ rooms and the solution lies there, as well.  “Me too!” I want to shout, but for a different reason than those young women do. The abuse I suffer from is being left out in the cold by an industry I have given good service to for fifty years. I can still do it, I can still be compelling. And so can other actresses in the third act of their careers. Just give us the chance. Write for us. Maybe my own midwinter won’t be so bleak after all. 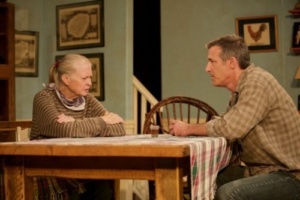 Dorothy Lyman’s new play, In the Bleak Midwinter, tackles what happens when an older person loses their spouse and their child feels responsible. Married to a fourth-generation dairy farmer, 76-year-old widowed Elizabeth Gladstone’s (Dorothy Lyman) husband has died. Still feisty and full of life, we first meet Elizabeth as she is returning home from the hospital having been bitten by the family boar. She has been working and taking care of 11 acres of farmland with only Christie (Shannon Stowe), a girl she helped years ago, who now serves as her housekeeper and friend.

Elizabeth’s overly dramatic and snotty daughter, Betsy (Abigail Hawk), and her business-minded husband, Tom (Tim Bohn), want her to sell the land to a developer. They want Elizabeth to move into a retirement village, first in the hometown where she lives, then to Florida so they can all have a comfortable life. When their daughter, Liz (Jeanne Lauren Smith), a school teacher who has just survived the suicide of an aide, arrives with her idealistic fiancé, Jason (Brennan Lowery), a new plan is born. Jason, who has a degree in agriculture, wants to save the land and Elizabeth’s independence. In the end, her daughter who really only cares about herself wins, and Elizabeth, Betsy, and Tom are off to Florida.

Ms. Lyman’s performance is riveting. She embodies this woman with a fighting spirit with comedic chops and handles the resignation with heartbreaking resolve. She shows why she was such a success on “All My Children” and “Mama’s Family.” This performance makes us want to see much more of her on stage. “Blue Blood’s” Abigail Hawk makes us hate Betsy. She is perfectly sweet, manipulating, and is beyond selfish in her wants. I understand that children do not want to be a parent to their own parent, but at the rate we dismiss another person’s life for our own, I just find it disgusting. Tim Bohn as her husband doesn’t win any sympathy votes either, but that is the thing about good acting: it stirs up intense feelings for a character when done well. Shannon Stowe, Jeanne Lauren Smith, and Brennan Lowery all bring a delightful realism and layered performance to round off the perfect casting.

Director Katie McHugh uses the space well and allows the actors to really dig deep into a very touching play. Johanna Pan’s set design and Elizabeth Mak’s lighting makes us feel as if we are actually in a farmhouse in Midwinter. Even James Higgins’ sound design with animal sounds, gunshots, and music is done with an outstanding earthy touch.

Lyman lived on an old dairy farm in upstate New York. When her son and her daughter had children, she felt as if she was missing everything. She relocated from upstate New York to Connecticut. In the Bleak Midwinter was Lyman’s way of dealing with leaving her home and making herself feel better about the big moves everybody has to make in life. Lyman manages to bring in all the controversial subjects people are talking about today, without making the play seem overstuffed. Lyman’s writing is poignant, funny, and an emotional rollercoaster. I hope to see this play get a longer run, as it is sure to tug at your heartstrings and make you think just a little bit more about what it is like to grow old. 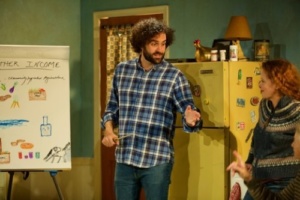 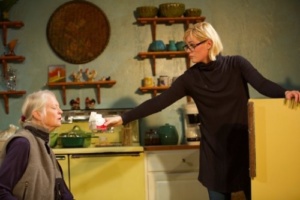