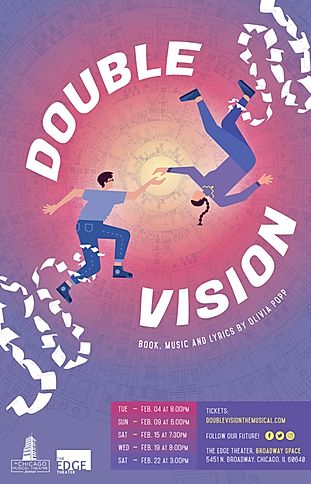 So as I sat watching my third Chicago Musical Theatre Festival show last night, Double Vision, with music, lyrics and book by Olivia Popp, who also is the show’s producer, I struggled to find something nice to say.  Really. Because Ms. Popp is a Stanford theater student, as I once was. Meaning she’s no dummy. Also, when she did the show at school, The Stanford Daily, for which I once also was the Drama Critic, gave it a great review. I can see how she was encouraged by that.

To write book, music and lyrics for an original musical successfully, as Gregory Becker has just done with another CMTF show, Wonder Women, you  have to be pretty well versed in all areas of the craft. Ms. Popp, however, appears to have the ambition but not the tools to do this alone.

The story of Double Vision revolves around multidimensional travel, and two people who find their “essential” doubles in the other dimension. In most good musicals, characters drive the story by actively seeking what they want. In this one, the characters rarely say what they want, and never directly go after it when they do. The story only moves forward in fits when external circumstance pushes the characters forward. That makes for good action movies, but not for the kind of character driven scenarios which make compelling musicals.

Luke (Ryan Frenk) is an astrophysics student on the east coast trying to prove the theory of his dissertation that a parallel universe exists, and that travel between universes is possible. But he spends a lot of stage time just complaining about getting it done, and doing nothing about it. Samantha (Stephanie Fongheiser) is an aspiring filmmaker on the west coast (apparently the east and west coast constitute different universes…which I can believe!) who can’t sell her space-themed screenplay. Instead of doing something to change that, she also whines endlessly, and does nothing about it.

Luke and Sam share a duet in their respective universes in which they both sing that they “want to get out of here…and find something better.”  However, that’s not what either one actually wants, nor do they subsequently try to do that.  When interviewed by The Stanford Daily, Ms. Popp said she wanted to deconstruct musical theater tropes.  But that’s not deconstructing the “I want” song. It’s just bad writing.

Luke builds a machine that will let him travel to the parallel universe if he is exposed to enough of a special radioactive isotope. His fellow student, Marty (Brian Pember) is working on a similar theory, and fears Luke will win the financing they both need. So it would make sense for him to set out to sabotage Luke. But instead, he also passively laments his situation,  and does nothing. Then he inexplicably helps Luke build his machine, and to create the isotope he needs. Only after that does he threaten to destroy the machine with a wrench…which he then doesn’t do either. Pity the poor actor who has to play this rudderless character, driven in circles by Ms. Popp’s writing.

A third student, Sierra (Gina Martin) shows the kind of concern and affection for hopelessly inept Marty which only a wannabe girlfriend would do.  But we learn later that she’s gay.  So that red herring also goes nowhere.

In Sam’s dimension, we meet her gay sister, Vanessa (Nina Jayashankar), who returns to the apartment after being dumped by her current girlfriend. Not surprisingly, Vanessa also wallows in her misery, but takes no action to change anything either.

It turns out that Luke’s faculty advisor, Mr. River, and  Dave, who is the father of Sam and Vanessa,  are played by the same actor because they are, in fact, the same individual. He tells us that he is a multidimensional traveler sent by the time lords to make sure the universe doesn’t fall apart because of a rift in the space/time/whatever.

Presumably this deadly rift would occur when Luke opens a worm hole and uses his machine to travel to Samantha’s universe. But apparently this was meant to be, from what happens next. So that wasn’t the threat to the universe. Therefore, I have no idea what the actual threat was. It’s possible that the threat was that the worm hole wouldn’t be discovered at all, and these two individuals wouldn’t ever meet their essential others. But it’s not clear how their meeting would save or destroy the universe, if that’s the case. When you create an imaginary world, you still need logical rules to govern it.

Ms. Popp also fails to exploit the philosophical potential of the premise she sets up. She explores nothing about the differences between the two universes except to say that in the alternate one, Chris Hemsworth runs Facebook because they think he’s cuter than Mark Zuckerberg. If she has a point of view as an author, it’s not on the stage.

Musically speaking, it appears she studied classical piano, because her piano score is annoyingly busy. The lyrics are too overstuffed to be understood, and too abstract to ever let her characters sing like they might speak. I can see Ms. Popp having a future writing angst filled pop songs for teen girls with lyrics that can be understood only after several times playing them. But this is musical theater, where everything is heard for the first time onstage, and goes past our ears only once.  This show doesn’t get that.

Another problem is that the keys of the songs are not well adjusted for her leading lady.  Poor Ms. Fongheiser is often forced to screech unintelligibly at the top of her range. I think we can blame Music Director Justin Cavazos for that one.

I have no idea what director Zach Barr brought to the party.  I will, however, compliment Ryan Frenk as Luke and Gina Martin as Sierra for bringing very real, unforced, and committed performances to situations that were patently preposterous. Nina Jayashankar as Vanessa and Brian Pember as Marty were at least very good singers.  Ethan Carlson as River/Connor  is also an interesting performer with a commanding voice who will certainly be busy in other things.

I hate to play the generational card, but the idea that wallowing in self-pity about your sorrows is good storytelling is a millennial folly.  At one point, Sam tries to use her understanding of screenwriting structure, which Ms. Popp clearly has studied, to resolve Luke’s problem. Too bad she hasn’t paid as much attention to the fundaments of story structure for her musical.

In the program note, it says that Double Vision is supposed to be about the “power of seeking something new.”  I hope, after this festival, that Ms. Popp goes back to the drawing board and actually writes a show that is about that, with the help of a capable collaborator or two.