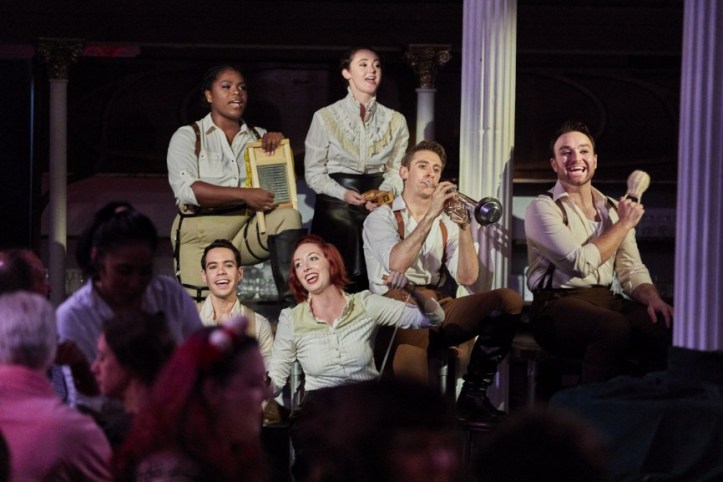 A wise theatre junkie once said to me that A Midsummers Night’s Dream is a play that either “sings when it’s good” or “sinks easily when it’s not“. And this co-production of Food of Love and Third Rail Projects currently serving up some Shakespeare with some food and wine on the side, most magically and sweetly sings.  The Shakespearean text reading isn’t the deepest or most definitive by any means, but as directed and choreographed by the inventive Zach Morris, his immersive version of arguably one of Shakespeare’s best comedy is a lullaby of sweet kisses backed by some charming harmonica and the odd twang of a musical saw being played just right.

Midsummer – A Banquet is a celebration of magic and effervescence, where love and mischief floats and dances through the woods, with a multi-course meal served on the side. We are escorted into the sweet little french bistro purposefully named Cafe Fae, and given a feast of appetizers and wine (or something else, if you want to venture over to the bar) to get our taste buds enlivened. The atmosphere feels just right, quaint and pretty, even though I know in the back of my head this space on Broadway and 13th Street was just recently an indoor flea market selling necklaces and nick-nacks. But through crafty ingenuity by set designer Jason Simms (Urge for Going), subtle lighting design by Deborah Constantine (Little Women) and lovely original music and sound design by Sean Hagerty (Then She Fell), the space draws us into a fairy land of gentle wonder.  The costumes by Tyler M. Holland (Red Line, Battery Dance) vary from perfect to overly busy, but in the end, the joy is clear, the treats tasty, and the bow and arrow is aimed wisely.

Waltzed in with style and grace by the royal Theseus, portrayed wisely by Ryan Wuestewald (Ghost Light), doing double duty as Oberon; and Hippolyta, proudly played by Victoria Rae Sook (Shake & Bake: Love’s Labour’s Lost) who naturally also portrays Titania, their pre-matrimonial festivities set the scene. The first atmospheric dance lingers just a bit too long, but when Midsummer: A Banquet finally gets to the main course, thrusting the four confused lovers; touchingly played by the lovely and feisty Caroline Amos (Romeo & Juliet) as Hermia (also Snug/Fairy), the energetic and convincing Joshua Gonzales (The Women From Space) as Demetrius (also Snout/Fairy), the utterly charming and handsome Alex J. Gould (The Woodsman) as Lysander (also Flute/Fairy), and the hilariously endearing Adrienne Paquin (The Comedy of Errors) as Helena (also Quince/Fairy), into the fairy filled woods over hill and over dale, the joy of the evening flickers brightly with delight.

As you can see, this band of actors, who also are our lovely servers of a meal that is more of a bite then a feast, plays numerous roles throughout, flittering and flying back and forth between lovers and artists.  Their craftsmanship is never more proven when the four actors who were playing lovers are now playing actors (are you following me?), plus the very funny, somewhat over-the-top Charles Osborne (Shake & Bake: Love’s Labour’s Lost) as the King ham himself, Bottom (also Egeus/Fairy) parading forth with a series of spectacular big sighs. The crew bring a household of music that delights until the company is called together, as per the script. They transform themselves most magically and beautifully into that ridiculous band of traveling actors navigating  the dark misty woods for a rehearsal of a play about love, magic, a feisty wall, and a radiant full moon, dutifully brought forth by Lauren Walker (Charm) as Straveling (also Philostrate/Goodfellow). Walker also finds her way through the woods to cast a spell over us all when she steps forward and elevates into Robin Goodfellow, bringing forth a donkey head to mess with Sook’s fairy Queen’s adoration, and mixes up the lovers’ eyes and hearts, much to Wuestewald’s fairy King’s fury, all over the course of one mirthful summer evening.

Even though the meal was less dinner and more like a treat, the show parallels that notion slightly. Midsummer – A Banquet beautifully brings the lightness to the fireflies and the frolic to the feast, but never digs in deeper. I’ve always found A Midsummer Night’s Dream a bit of a tease for greater ideas with an over long ending, giving us the traditional wedding finale, and then play audience to itself as another whole play unfolds with the hilariously overdone actors.  It’s purposeful and silly in its portrayal, while also bringing a sweet tinge to the otherwise not so good champagne.  We join with the royal “please no epilogue”, wanting only the ending that was promised.  A kind word from Puck, a small wave and a bow, and then to bed, as they say. I left utterly intoxicated with the pleasantness of the magical evening, but still a bit hungry in the stomach and in the intellectual mind.