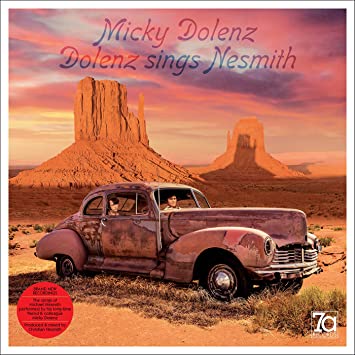 Truth upfront—I didn’t like this album at first. As a Monkees fan now for more decades than less, I was thrown by my initial listen to Dolenz Sings Nesmith (7A Records). Based on a concept employed by old friend Harry Nilsson, who recorded tunes of fellow songwriter Randy Newman for 1970’s Nilsson Sings Newman, this new record from former Monkees singer/actor Micky Dolenz is comprised of tracks from the catalog of fellow surviving bandmate Michael Nesmith. By definition, this should have been a slam-dunk. Why, then, had it not made an instant “believer” out of me? What was missing?  My first thought was the “Wrecking Crew”—that classic stable of killer West Coast studio musicians utilized by dozens of producers across thousands of recordings . . . including, of course, those great hits released by The Monkees back in the ’60s. That didn’t sit right with me, though, because I adore the band’s 50th anniversary album Good Times! (2016), which featured only a small handful of backing tracks that featured the Wrecking Crew. The rest of the album was comprised of newly rendered and recorded product. I wondered, and worried, about my reaction.

Maybe it was because some tracks seemed to lack that distinctive blend of homespun melancholy so crucial to much of Nesmith’s output—Papa Nez himself referred to it as a kind of “High Lonesome” feeling at the heart not only of the blues and country music he has dug by others but also coursing through the veins of those plaintive songs he wrote and called his own.

I went back and listened to the album again. By the time I reached the third track, a spare acoustic guitar version of Nesmith’s song “Don’t Wait for Me” (not to be confused with “Don’t Call On Me,” first recorded by a pre-Monkees Nesmith under the name “Michael Blessing” before being glitzed up on the Monkees’ fourth LP Pisces, Aquarius, Capricorn & Jones Ltd.) put a gentle spell on me the second time around. The fourth track, “Keep On,” then grew on me in stages, leaping up into a big and bold rock assemblage of dynamism and dynamic—sonic dynamite, with Dolenz’s soaring vocal riding high atop what my newly attuned ears heard as superb production done by Christian Nesmith (both Nez’s firstborn and a remarkable guitarist who has been a vital ingredient of the touring Monkees live band over the past years).

There are a few tracks on this album where a new arrangement, though always competently achieved and performed, does not a successful interpretation make of the original song—the bare, piano-and-vocal only version here of “Nine Times Blue” misses its mark by going after the song’s heartbreak a bit too obviously. On songs such as “Old Bound” and “Marie’s Theme,” however, Dolenz brings forth the subtle ache at the center of Nesmith’s melodies with purpose and grace. Already a bizarre little ditty, “Tapioca Tundra” from the Monkees’ 1968 album The Birds, The Bees & The Monkees here finds Dolenz in this new version comfortably cradled as grand trickster vocalist in the spirit of another 1968 Monkees track from that same album, “D.W. Washburn.” For my fellow already-initiated, Micky is in full “Frodis” mode on this one—for those who don’t yet get that reference, go watch the final episode in the second season of the Monkees’ TV show.

As producer, Nesmith calls forth a fairly ambitious if sometimes derivative collage of sounds and arrangements across which Dolenz delivers his usual—and unusually strong, for a rock ‘n roll septuagenarian—first-class vocals. In this album’s new version of Nesmith’s Monkees-era rocker “Circle Sky,” the educated listener will have fun picking up on the referential odds and ends strewn throughout this arrangement—seemingly in homage not only to late Beatle George Harrison’s two Indian raga-music tracks “Love You To” (1966’s Revolver) and “Within You Without You” (1967’s Sgt. Pepper’s Lonely Hearts Club Band) but also to Led Zeppelin’s “Friends” from that classic rock legend’s third album.

While listening more intently to the album, what moved me most deeply was this album’s version of “Tommorrow and Me” from Nesmith’s fifth studio album after leaving the Monkees, And the Hits Just Keep On Comin’ (1972). For me, this version of the song exceeds the feel and emotional impact of Nesmith’s original recording—a poignant and bittersweet song that suits far better the perspective and interpretation of a man who is, like Dolenz, in his 70s. The fact that Nesmith wrote the song when not yet in his 30s speaks volumes about the man’s often wise but just as often vulnerable reactions both to time, and to life. Looking now at the album’s cover, a sun and shadow image of once-upon-a-time Monkees-youthful amigos Dolenz and Nesmith seated together in a rusted and road-weary automobile—Micky in the driver’s seat, Nez riding backseat shotgun—I feel thankful that I gave some more time and thought to this nifty new Micky Dolenz project. As we all continue to rise from the troubling ashes of COVID-19, we may feel a lot better in the midst of our collective “grand ennui” after receiving this particular musical shot from Drs. Nesmith (both father and son). And if you think that someone has slipped you a Micky, just think back to “The Frodis Caper” . . . and smile.

Suzanna BowlingJanuary 29, 2023
Read More
Scroll for more
Tap
What to Watch in The New Year: May 14
Broadway at Tavern on the Green