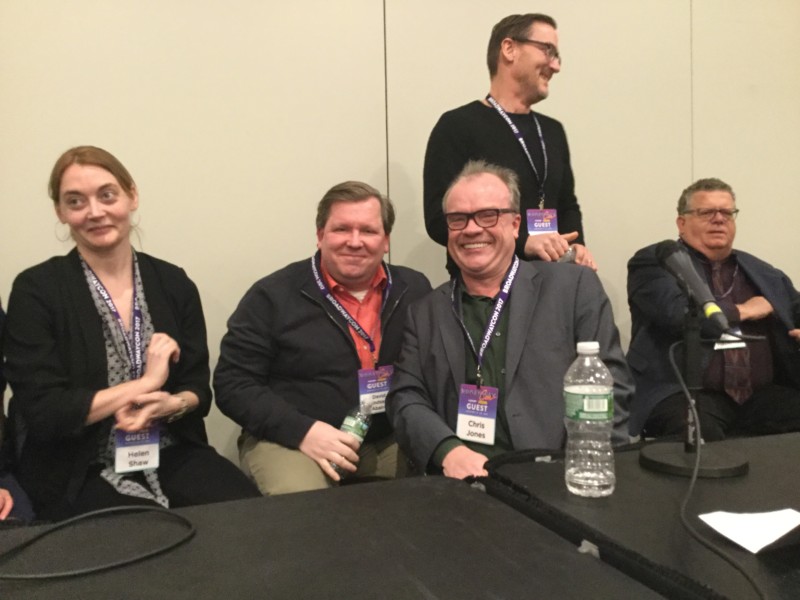 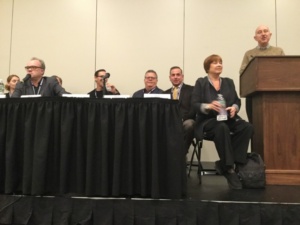 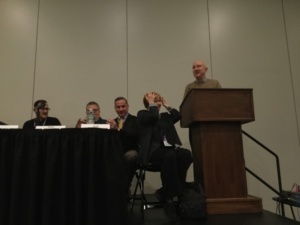 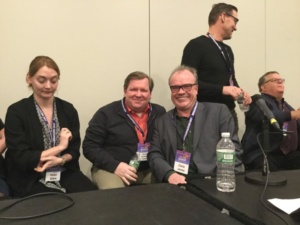 Chris Jones (moderator) is the chief theater critic and a Sunday culture columnist for the Chicago Tribune. He also serves as a critic for CBS-2 Chicago. He has covered the arts in numerous cities throughout the United States during his career, including a stint as Variety’s Broadway critic. He is director of the National Critics’ Institute at the Eugene O’Neill Theater Center in Connecticut and has twice served on the drama committee of the Pulitzer Prizes. 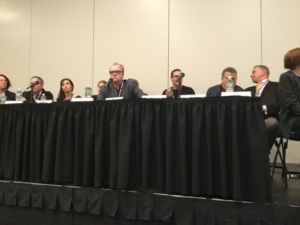 David Lindsay-Abaire is a playwright, screenwriter, lyricist, and librettist. His most recent play Good People premiered on Broadway, and was awarded the New York Drama Critics Circle Award for Best Play, The Horton Foote Prize, The Edgerton Foundation New American Play Award, and two Tony nominations. His previous play, Rabbit Hole, received the Pulitzer Prize for Drama, five Tony nominations, and the Spirit of America Award. He also wrote the book and lyrics for Shrek the Musical, which was nominated for eight Tonys, four Oliviers, a Grammy, and earned David the Ed Kleban Award as America’s most promising musical theatre lyricist. Mr. Lindsay-Abaire’s other plays include Fuddy Meers, Kimberly Akimbo, Wonder of the World, and A Devil Inside, among others.

Matthew Lombardo’s Broadway credits include High starring Academy and Tony Award nominee Kathleen Turner and Looped starring Valerie Harper . He is also the author of the Off-Broadway hit Tea at Five, the Katharine Hepburn play starring Kate Mulgrew, which won an IRNE Award for Best Solo Play. His plays have broken box office records at several regional theatres across the country, and his work has been produced at such prestigious venues as Seattle Rep, The Shubert Theatre in Boston, Hartford Stage, The Hippodrome Theatre in Baltimore, Arena Stage, The Broward Center for Performing Arts, The Orpheum Theatre in Phoenix, The Curran Theatre in San Francisco, American Repertory Theatre and others.

Peter Marks joined the Washington Post as its chief theater critic in 2002. Prior to that he worked for nine years at the New York Times, on the culture, metropolitan and national desks, and spent about four years as its off-Broadway drama critic. Marks was the Times’ second-stringer under Ben Brantley from 1996 to 1999. Marks left the job to cover the 2000 Presidential campaign.

Elysa Gardner, a former music and theater critic at USA TODAY, was also at different, sometimes overlapping points a regular contributor to the Los Angeles Times, Rolling Stone and The New Yorker’s “Night Life” section. She has interviewed icons such as Stephen Sondheim, Tom Stoppard, Tony Kushner, Harry Belafonte, Barbra Streisand, Paul Simon, Aretha Franklin, Bruce Springsteen, Mavis Staples, Bono, Beyonce, Madonna, Jay Z and the late Arthur Miller, August Wilson, Edward Albee and David Bowie, She has written for Harper’s, Out, Entertainment Weekly, Spin and Vibe, and served on the jury for the 2015 Pulitzer Prize in drama. She is a member of the Drama Desk Board of Directors and serves as a member of the NY Critics Circle.

Linda Armstrong covers theater for the NY Amsterdam News, started more than 100 years ago and now one of the most important Black newspapers in the country and today. At the 43rd Annual AUDELCO Awards, which recognize Excellence In Black Theatre, Linda was honored with a Special Lifetime Achievement Award for her 30 years of theater criticism for the paper.

Helen Shaw is a performance critic at Time Out New York. She teaches theater studies at New York University, and is the associate director of Programs for the Martin E. Segal Theatre Center at CUNY, where she also co-curates the Prelude festival, a celebration of downtown performance. Her criticism has also appeared in TheatreForum, the New York Sun, the Jewish Daily Forward and Playbill, and she has served as a dramaturg for Martha Clarke, Simon McBurney, Lear Debessonet, Francois Rochaix and Janos Szasz.

Susan L. Schulman has been a theatrical press agent for more than 40 years, handling publicity for Broadway and Off-Broadway plays and musicals, national tours, cabaret, special events and individual personalities. Her Broadway productions include Applause, Scapino, Sly Fox, Bob Fosse’s Dancin’, A Streetcar Named Desire, Death and the Maiden, Requiem For A Heavyweight, State Fair and Dream. She has handled publicity for the Manhattan Theatre Club, Circle in the Square, York Theatre, Dance Theatre of Harlem, the Joffrey and Feld Ballets as well as Tony Award winners/nominees Karen Ziemba, Brian Stokes Mitchell and Kathleen Chalfant among many others. Her memoir, “Backstage Pass To Broadway,” is one of Amazon’s 100 Best Selling books on theatre. www.schulmanpublicity.com

Since its founding in 1949, Drama Desk’s mission has been to promote and support artistic excellence in the New York professional theater, in its multitude of forms and styles and on stages of various sizes and configurations. The organization accomplishes its goal by hosting an annual Drama Desk Awards celebration and presenting various educational forums and panel discussions to its members and the theatergoing public. Dramadesk.org