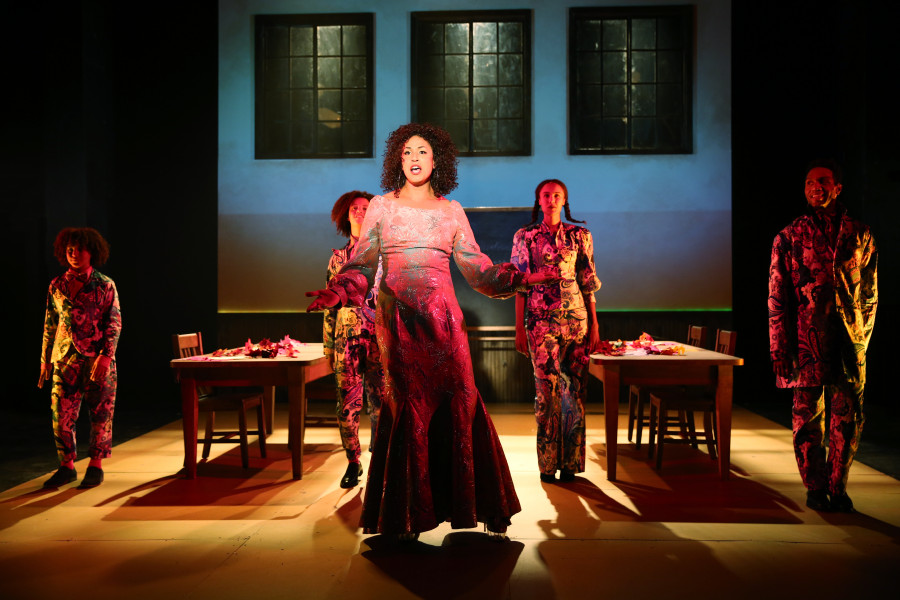 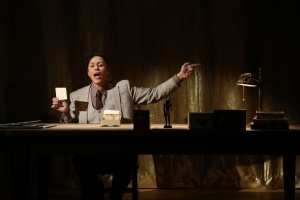 “What you thought was your heart was merely a husk!”

Daniel Alexander Jones and his ’80s diva alter ego Jomama Jones are pulsating at the Connelly Theater, in Duat, which really should be called Triat, as the show is in three parts. Sadly I missed most of the first part as I was highjacked by a crazed bus driver on the 14D. Yes, I have filed a complaint. Luckily I arrived to hear why the show was named as it is. Duat refers to the Ancient Egyptian underworld, where a soul had to pass a series of trials. Duat has Jones’s reliving, confessing and performing acts of selflessness to arrive and enter paradise. 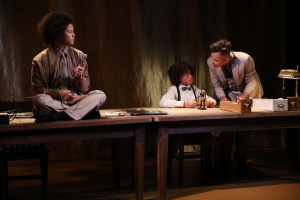 Daniel, aided by his 12-year-old “archivist” self (Jacques Gerard Colimon) and his even younger self (Tenzin Gund Morrow) relate to the audience the Jones’s family tree. We see the youngest Jones’s love of libraries, where the women who passed before him guide him to the works in Black history, art and music that shape him. As Daniel and Morrow study Colimon is also recording a love letter to an unnamed schoolmate, a boy as Daniel blushes at the remembrance and Morrow seeks for his confession. We also learn of grandmother when he and his little brother were obsessed with the murders of Jeffrey Dahmer. During all this there are musical breaks written by Daniel, Samora Pinderhughes and Bobby Halvorson, that break the tense and darker moments. Here the stage is surrounded by card catalogues thanks to  Arnulfo Maldonado delightful designs. Even the sides of  the Connelly Theater are used to fill out Jones’ childhood home. As if the statement confess signals a clap of thunder we are transported to the after life where goddesses and Anubis chant “What you thought was your heart was merely a husk!” 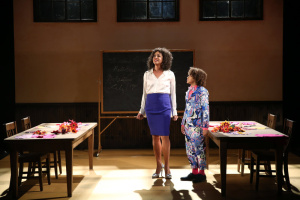 The next section sends us to a school Thanksgiving pageant led by Jomama Jones. Now a school teacher Morrow seeks to know what seed he is. Miss Jones and the librarian Miss Robinson (Stacey Karen Robinson) teach the children find their own paths of self-discovery and who they will grow to be. Kaneza Schaal plays a young writer whose work is on the verge of blossoming.  Toussaint Jeanlouis, plays the boy Colimon first kisses. Even Ms. Jones blossoms and forgives herself through all the stages of life or lives and is ready to move to the afterlife. 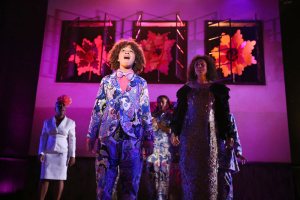 Up and very coming director Will Davis (Men on Boats) and Jones are a good match. Together the create a reality/fantasy that surpasses one life-time.

Lighting designer Solomon Weisbard should be highly praised for his lighting which knew the perfect hues for each moment.

There is not one member in this cast that isn’t extremely talented and all are to be applauded especially the very young and talented Colimon and Morrow. But make no mistake this is Daniel/Jomama Jones show. There not a moment on stage isn’t well thought out and breathtakingly simply. The writing clear cut and captivating. This is when downtown theatre makes it’s mark on us all.