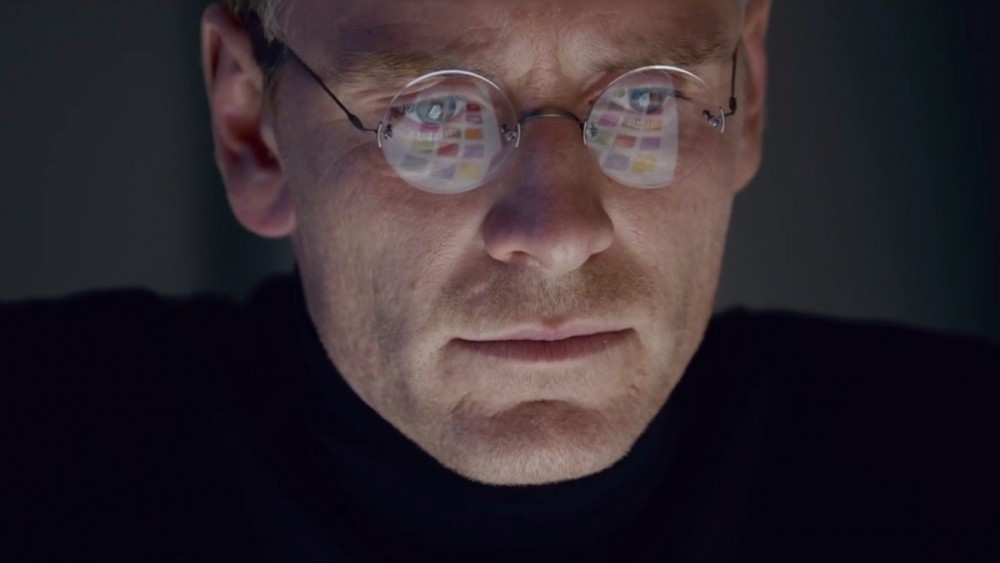 On October 5, 2011, the world lost a visionary in Apple’s CEO Steve Jobs. Revolutionizing society with his various unique products such as the Mac, iPod, and iPhone, it’s no surprise that only a few years after his death, several films have already come out depicting the life of this game- changing technological pioneer. 2013’s Jobs, Ashton Kutcher portrayed Steve Jobs during early moments of his personal life while cre- ating Apple with Steve Wozniak. While the two films and actors will be directly compared to each other thanks their quick releases, dream team director Danny Boyle, writer Aaron Sorkin and actor Michael Fassbender are able to create a special film that is able to stand alone while giving a unique perspec- tive to one man’s life through a series of key moments during the backstage moments leading up to three press conference unveiling events.

First things first, this is not your standard biopic. In Steve Jobs, we follow Jobs back- stage during three product launch events, 1984’s Macintosh personal computing announcement, Job’s new computing com- pany NeXT’s 1988 gamble, and 1998’s iMac unveil in a surreal stage play-esk reimagining of A Christmas Carol. In each act, Jobs meets backstage with the same key figures in his life during each era, including Apple co-founder Steve Wozniak (Seth Rogen); the man who ousted Jobs from Apple, John Sculley (Jeff Daniels) and his daughter that he originally denied, Lisa Brennan-Jobs (Perla Haney- Jardine, Ripley Sobo and Makenzie Moss) all while Barbara Hoffman (Kate Winslet), Jobs’ marketing chief, tries to defuse all of the social land-mines that Jobs places in his own path.

Since each character confronts Jobs in every act, it’s as if Jobs were repeatedly vis- ited by the ghosts of Christmas past, present and future. Jobs, known for being a control freak, notoriously difficult person, and indif- ferent to his children, while being a wealthy visionary for his time, it’s not hard to find cor- relations with Ebenezer Scrooge. With each act given about 40 minutes of screen time, only a few flashback depicting certain aspects of character building that couldn’t be told in snappy dialogue, and montages of news sto- ries painting the scene of the next era of Jobs career, the film feels like you are following Scrooge on his path of redemption. Going in expecting another biopic, it was thrilling to learn about these people in quick moment to moment sequences all while preparing to take stage and unveil revolutionizing technology. Most people look at tycoons, athletes, and celebrities and see them as impervious to every day woes. Steve Jobs is able to human- ize these people and remind its audience that we are one and the same…everyone has their share of baggage.

It’s interesting to see acclaimed writer Aaron Sorkin paired up with Danny Boyle since the last time Sorkin was teamed with
a stylized director; they tacked the techno- visionary Mark Zuckerberg of Facebook in The Social Network. I don’t think it’s a coinci- dence that Sorkin penned the film since Jobs and Zuckerberg are eerily similar in their egotistical, control freak computer wiz kind of way. Like The Social Network, Steve Jobs follows an entrepreneur as he ironically ends up alienating everyone closest to him while inventing a revolutionary technology that brings people together. It’s as if Sorkin creat- ed a version of Mad Libs where all he has to do is change and tweak a few characters and he’s written another award-worthy film. Set behind the curtains, Steve Jobs is essentially a backstage drama. Sorkin’s characters wield words like weapons while Boyle maintains a kinetic pace to match the rapid-fire dialogue in quick moment-to-moment interaction. Without the other, the film might be dead in the water but with the power of Boyle’s artis- tic style, Sorkin’s tongue-and-cheek word- play, and Michael Fassbender acting prow- ess, Steve Jobs is a fantastic work of art. Filling the shoes of Jobs, Michael Fass- bender is onscreen for almost the entire film. While originally not the studio’s first choice and with Ashton Kutcher already portraying Apple’s CEO, Fassbender drives home Job’s relentless focus, ego and disregard for anyone that stands in the way of his vision. While he doesn’t look like the late CEO as much as Kutcher did, Fassbender does start to look like Jobs towards the later half of the film as he ages. Though he might not have been chosen for his look, Fassbender is able to deliver Sorkin’s trademark verbiage through a distinctive voice and tone choice that’s immediately noticeable and helps when trying to separate the actor and the charac- ter he is protraying. At any point of the film, Fassbender is able to take and explore Jobs’ ego and how he relates to others while just taking him to the edge before letting him loose. Paired up with Sorkin’s writing, Fass- bender is able to do justice with in bring such a polarizing figure to life on the screen in this dramatization.

In what feels like a boxing match with Fass- bender’s Jobs in every moment of interaction, each backstage moment with the members of Jobs’ life shine thanks to the supporting cast of the film. It’s hard seeing past Seth while dealing with his supposed best friend makes up for the casting decision. While I preferred Josh Glad’s version of Wozniak since he looked like his counterpart, I com- mend Rogen for his emotional effort. Jeff Daniels is no stranger to Sorkin’s writing being that he was the lead of Sorkin’s HBO show The Newsroom. Daniel’s John Sculley, the friend/man who ousted Jobs from Ap- ple, does a great job of not coming off like a villain but rather a father figure whose hand was forced thanks to his power-hungry child. Stealing every scene that she’s in, Kate Winslet was the perfect choice for market- ing chief Barbara Hoffman. The only one that can penetrate Jobs’ ego while keeping him on track, Winslet acts as almost the conscience that Jobs lacks. As brother and sisters might bicker and fight, Winslet’s Hoff- man is able to remind Jobs that while he might be leading a technological revolution, he is still human after all.