Ed Asner Has Moved Onto That Big Desk In The Sky 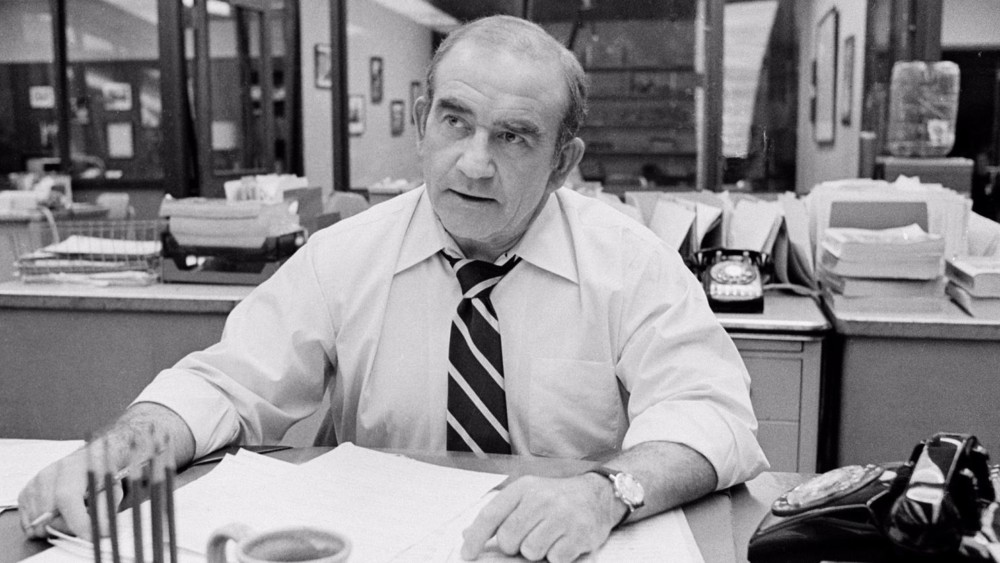 Ed Asner Has Moved Onto That Big Desk In The Sky

Ed Asner was best known as Lou Grant from the Mary Tyler Moore show. From there Asner was given his own show, Lou Grant (1977–82) about newspaper journalism (for his role as Grant, Asner was one of only two actors to win an Emmy Award for a sitcom and a drama for the same role, with the second being

Asner studied journalism in Chicago until a professor told him there was little money to be made in the profession. He quickly switched to drama, debuting as the martyred Thomas Becket in a campus production of T.S. Eliot’s Murder in the Cathedral before being drafted in the military.

Following his military service, Asner moved to New York City in the mid-1950s. Asner played Jonathan Jeremiah Peachum in the Off-Broadway revival of Threepenny Opera, which moved to Broadway. On Broadway he was also in Face of a Hero alongside Jack Lemmon.

Asner began made his TV debut in 1957 on Studio One. The Outer Limits, Voyage to the Bottom of the Sea, Route 66, The Reporter, starring Harry Guardino, Mission: Impossible, The Fugitive, The Invaders and more. He made his film debut in 1962, in the Elvis Presley vehicle Kid Galahad.

In 1970 Asner was cast as Lou Grant. In 1977, after Moore’s series ended, Asner’s character was given his own show, Lou Grant (1977–82). Asner was one of only two actors to win an Emmy Award for a sitcom and a drama for the same role, with the second being Uzo Aduba). In addition he made appearances as Lou Grant on two other shows: Rhoda and Roseanne.

Asner provided the voice of Carl Fredricksen in the Academy Award-winning Pixar film Up (2009). In 2001, Asner was the recipient of the Screen Actors Guild Life Achievement Award.

Asner has won more Emmy Awards for performing than any other male actor (seven, including five for the role of Lou Grant). In 1996, he was inducted into the Academy of Television Arts & Sciences Hall of Fame. In July 2010, Asner completed recording sessions for Shattered Hopes: The True Story of the Amityville Murders; a documentary on the 1974 DeFeo murders in Amityville, New York. Also in 2010, Asner played the title role in FDR, a stage production about the life of Franklin Delano Roosevelt; he subsequently continued to tour the play throughout the country. In January 2011, Asner took a supporting role on CMT’s first original sitcom Working Class.

In 2018, Asner was cast in the Netflix dark comedy, Dead to Me, which premiered on May 3, 2019. The series also stars Christina Applegate, Linda Cardellini, and James Marsden. In 2020 he guest starred in an episode of Modern Family and in 2021 played himself in a sketch on Let’s Be Real.

Beginning in 2016, Asner took on the role of Holocaust survivor Milton Salesman in Jeff Cohen’s acclaimed play The Soap Myth in a reading at Lincoln Center’s Bruno Walter Theatre in New York City.  He subsequently toured for the next three years in “concert readings” of the play in more than a dozen cities across the United States.[44] In 2019, PBS flagship station WNET filmed the concert reading at New York’s Center for Jewish History for their All Arts channel. The performance, which is available for free, world-wide live-streaming, co-stars Tovah Feldshuh, Ned Eisenberg, and Liba Vaynberg.

Asner served two terms as president of the Screen Actors Guild. He played a prominent role in the 1980 SAG strike.

With the sudden cancellation of Lou Grant in 1982 there was much controversy. The show had high ratings, and Asner believed that his left-wing political views were the cause for the show’s cancellation.

Asner was married to Nancy Sykes from 1959 to 1988. They had three children: twins Matthew and Liza, and Kate. In 1987, he had a son named Charles with Carol Jean Vogelman. Asner was a parent and a grandparent of a child with autism and was involved with Autism Speaks.

Asner died on August 29, 2021, at age 91, at his home in Tarzana in Los Angeles, California and was announced by his children on Twitter.