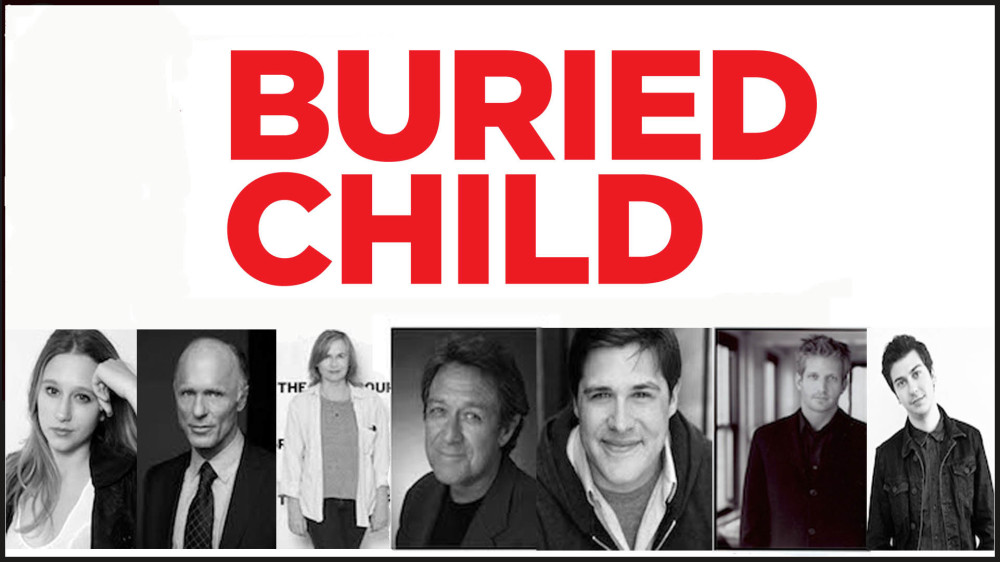 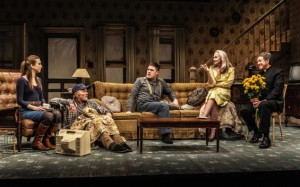 The New Group’s revival of Sam Shepard’s Pulitzer-winning 1978 drama Buried Child, has an award winning performance by Golden Globe, Drama Desk, Lucille Lortel, SAG, Obie, Theatre World Award winner and Oscar nominee Ed Harris. Harris is so real as Dodge, a man living with the sin of murdering a child, he is decaying away. Once a successful farmer in rural Illinois, now he drinks, smokes and is withering away. Playing Mr. Harris wife Halie is his real wife Amy Madigan. This happy couple, play a couple intrenched in a destructive wreck of a marriage, that is all but a sham. Halie who once slept with one of her sons and bore a child, is now having an affair with Father Dewis (Larry Pine). Their sons Tilden (Paul Sparks) and Bradley (Rich Sommer from “Mad Men”), are not much better. Tilden is a killer waiting to be let lose, he is damaged mentally. He is not all together there and has returned to the family homestead after getting kicked out of New Mexico. Why, we never know except that it was bad. Bradley cut off his leg in a accident and has a prosthetic left leg, he is just as psychopathic, but he is physically damaged. The son they expected to take over has been killed.

Enter Vince (Nat Wolff, “Naked Brothers Band”), Tiden’s son whose been gone, but has returned to the roost with his girlfriend Shelly (Taissa Farmiga TV’s “American Horror Story”). Things go from weird to weirder, as no one seems to recognize him. This is a family were everybody is incapable of love. The longer you stay watching their interactions the less you want to know, as all gets unveiled.

The cast is highly uneven. At the helm you have the magnetic and charismatic Ed Harris who is perfection, Madigan is perfectly obnoxious as the a shell of a women whose affair with her own son set off the sea of destruction. Paul Sparks is perfectly scary as the demented Tilden and Larry Pine embodies the hapless preacher, who represents the breakdown of morality and ethics in society. The rest of the actors are too much one note. Scott Elliott direction is uneven. The set by Derek McLane and lighting by Peter Kaczorowski  let us know we are in this woebegone place.

This symbolic play about incest and the breakdown of the American Dream is haunting if not a little too tragic.