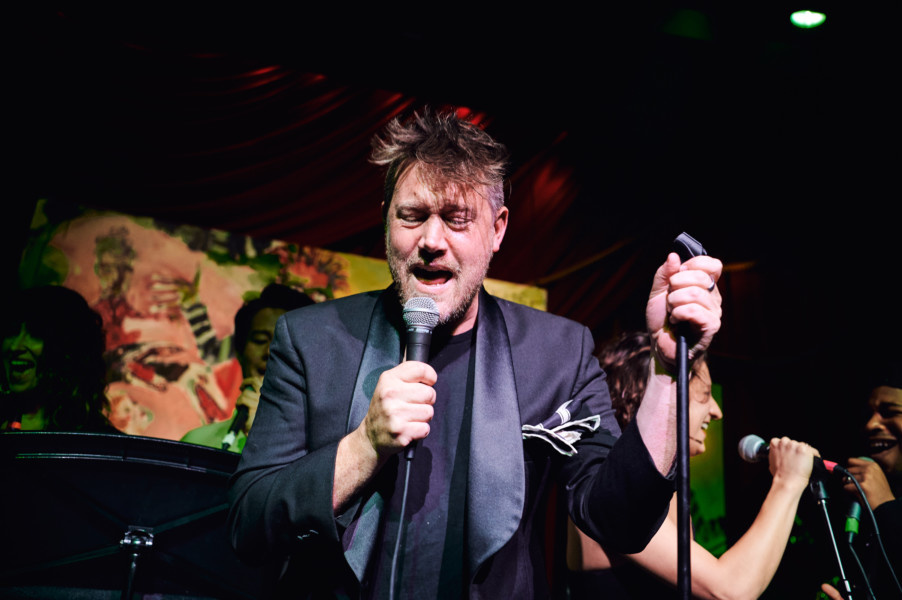 Sophia Anne Caruso, Eddie Perfect, Kelvin Moon Loh, and more of the Broadway smash hit Beetlejuice performed for a sold-out crowd of fans of the strange and unusual at the Beetlejuice Black & White Ball last night at PUBLIC Arts.

The haunted celebration featured performances of songs that didn’t make it to Broadway, including “Mama Would” and “Everything Is Kinda Meh,” as well as several debuts of Eddie Perfect’s compositions that have never been heard or performed before by a living soul.

Broadway’s Lydia trio — Sophia Anne Caruso, Dana Steingold and Presley Ryan — surprised the audience with a sing-a-long to breakout hit “Dead Mom.” To round out a fantastical night in the Netherworld, Shrunken Head Guy, a fan favorite of the film and musical alike, made his DJ debut to keep the party going after the performances ended.

The show’s costume designer, Tony Award winner William Ivey Long, transformed PUBLIC Arts into the Netherworld with custom creations, including one-of-a-kind paintings of Beetlejuice and Lydia, inspired by Tim Burton’s dearly beloved film.TodayTix Presents is a live events series that brings together artists and audiences for a curated experience of culture, storytelling and creation. To learn more, visitwww.todaytix.com or download TodayTix for iOS or Android.