Eden Espinosa, Karen Olivo Bring a One Night Only Production of BKLYN: The Musical to Benefits Covenant House 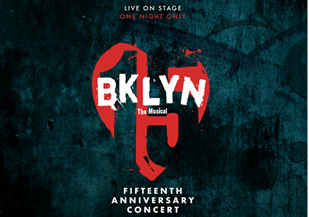 Eden Espinosa, Karen Olivo Bring a One Night Only Production of BKLYN: The Musical to Benefits Covenant House

With original direction by Tony Award winner Jeff Calhoun (Newsies, Big River) the musical is written by Mark Schoenfeld and Barri McPherson.  BKLYN made its World Premiere in Denver in 2003 and opened on Broadway on October 21, 2004 at The Plymouth Theatre (later renamed the Gerald Schoenfeld Theater), playing 311 performances. The original Broadway cast of ten featured stars-in-the-making Kevin Anderson as “Taylor”, Eden Espinosa as “Brooklyn”, Ramona Keller as “Paradice”, Cleavant Derricks as “Streetsinger” and Karen Olivo as “Faith”. Ben Brantley of New York Times wrote, “Brooklyn is in many ways a throwback to the quaint, simple and whimsy-laden musicals that first blossomed Off-Broadway and then the mainstream in the late 1960’s and the early 70’s.” Following the Broadway engagement, a National Tour launched starring Diana DiGarmo (“American Idol”) and an Original Broadway Cast Album was released.  A West End production starring Emily-Mae, Hiba Elchikhe, and Sabrina Aloueche is currently running at the Greenwich Theatre in London through October 19, 2019.

The musical tells the story of the “City Weeds,” five homeless musicians who band together to transform their neighborhood beneath the Brooklyn Bridge. Utilizing the play within a play structure, the City Weeds share the story of Brooklyn – a Parisian singer – in addition to their own stories. Orphaned after her mother’s death, Brooklyn travels to the United States in search of her father and the life she always dreamed of. The discovery of a newfound passion leads to opportunities she’d always hoped for, as two stories weave together to create an inspiring and refreshing performance.

Founded in 1972, Covenant House helps to transform and save the lives of more than a million homeless, runaway, and trafficked young people. The not for profit organization offers housing and support services to children and teens in need, impacting the lives of over 80,000 people each year. More information about the mission and work of Covenant House can be found at covenanthouse.org.

Tickets to the 15th Anniversary concert of BKLYN can be purchased here.

Suzanna BowlingJanuary 24, 2023
Read More
Scroll for more
Tap
Broadway Back To School 2019 Gala a Smash Success!!
Amas Musical Theatre Looking For Their Romeo For a New Musical Romeo and Bernadette