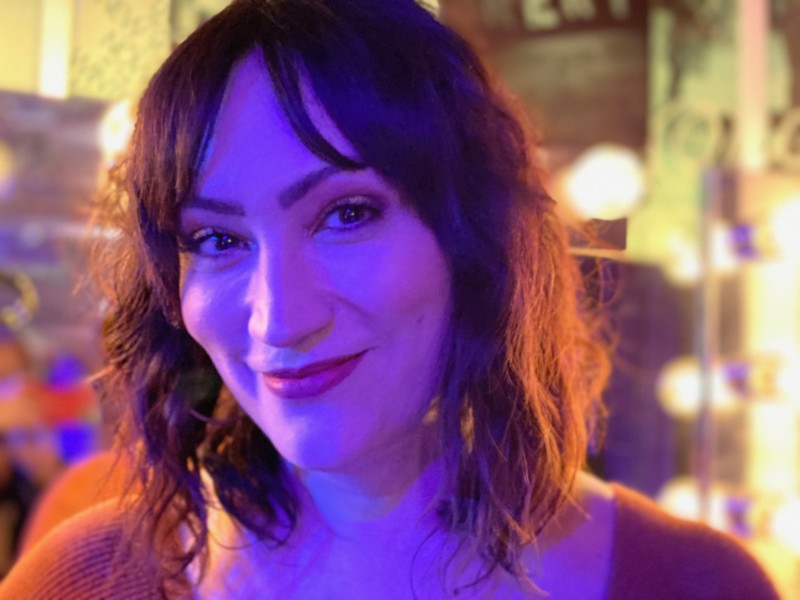 “What matters first is that I have something to share.”

Eden Espinosa‘s new residency at The Green Room 42, is strictly unplugged and unplanned. This month long residency has turned into a second month due to the shows popularity and the fact this star changes it up every performance. No two will be alike. Different setlist, guest stars and musicians.

The evening started out with “Bed For Two,” from her new album Revolution. This musical theatre artist is also a rock goddess as she launched into Sinéad O’Connor anthem “Nothing Compares to You” and just as easily back to “Falling To The Ground” from Falsetto’s, showing us what a great Trina she must have been.

It is Espinosa’s honesty, combined with a bundle of nerves, that make her refreshing. She is candid and real and draws us to her like a moth to a flame.

Eden took on Grammy award winner Billie Eilish’s “When the Party’s Over” and brought it to a new level.

It was on Alanis Morissette’s “You Oughta Know”, that the full spectrum of what Ms. Espinosa can do with her voice came thrillingly, achingly and fiercely to attention, daring you not to notice.

Eden has self published her two albums and she does this from Kick Starter. The reward is getting to sing a duet with her. Her guest wanted to do “The Prayer” which Eden has sung, but it wasn’t until she looked at the song the night before she realized it was also in Italian.

Ms. Espinosa has an amazing instrument that is rather flawless, she gives us rock and roll, then musical theatre and soft pop. She is vocally seamless, taking on each genre as if she was born to it. She sometimes uses an iPad, forgets words or changes things up. She is surprising and we soak it in.

Eden has been working on the new musical Lempicka, which ran at the Williamstown Theatre Festival this summer. We were treated to “Stillness” sung by Eden and Amber Iman. This Broadway-bound musical, is directed by Tony Award winner Rachel Chavkin, with music by Matt Gould and book and lyrics by Carson Kreitzer and I for one am now in anticipation.

Giving the audience a little bit of what they wanted, Eden gave them “The Wizard and I” from Wicked.

In my version of her show, she was joined by Levi Kreis who she meet at a Beetlejuice Show at Universal. Singing George Michael’s Faith, Kreis knocked it out of the park. Ms. Espinosa will be joining him at Rockwood Music Hall tonight.

“Fireworks and Stars” is another song of Ms. Espinosa’s Revelation album. Her touching lyrics pair well with the soft pop sound, making her music expressive, melodic and perfectly toned.

Who knew that Eden was such a Taylor Swift fan, otherwise know as a swifty. This self professed nerd gave us a moving “Clean”.

Taking on another cover, Demi Lovato’s “You Don’t Do It for Me Anymore” got Ms. Espinosa’s prolific emotional resonance.

Ending the show Eden gave us a heartfelt, exposed version of Brandi Carlile’s “The Joke”.

This underrehearsed evening with Senfu Stoney on drums, Thad Defrock on guitar and Max Grossman on piano is magical and a must see evening or evenings considering that each one is as unique as she is.

For more on Eden Espinosa.