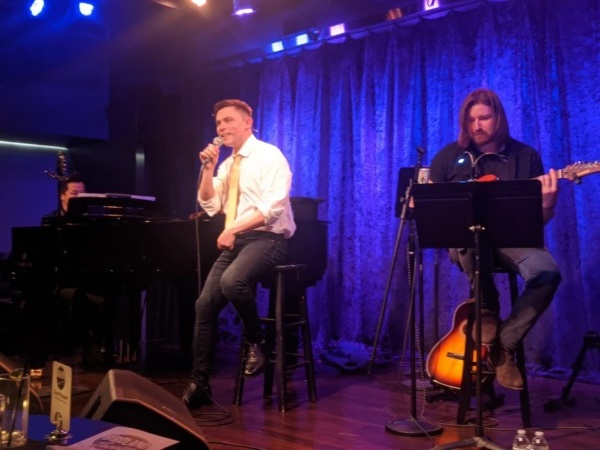 Edmund Bagnell’s smile took over the entire stage when he began his show at Birdland on March 20; and when he finished his new show, titled Americana, the entire audience was smiling just as wide. Violin in hand he beams with hope and joy which is what we need after two years of pandemic stress. 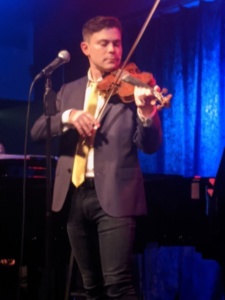 I have been following Mr Bagnell since I first saw him with his talented group, Well Strung, when they were the back up band for Joanna Gleason at 54 Below. Now working solo with his musical director and pianist, Yasuhiko Fukuoka and guitarist, Miles Sweeny, he displays star power with his boyish charm. 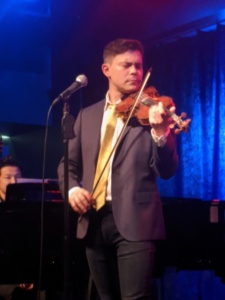 Opening the evening with Aaron Copland’s “Appalachian Spring Suite” and Carly Simon’s “Let the River Run”, he captures the audience with his violin. This show is about America, he explains, and it’s wonderful to see him morph his violin into a fiddle as he next plays and sings Garth Brooks’ “Callin’ Baton Rouge.” 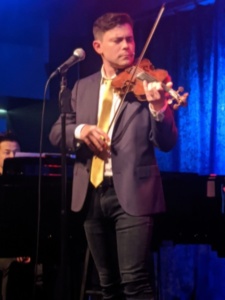 Mr Bagnell and Mr Fukuoka enjoy creating mashups where they pair songs with similar themes into an interesting mix. Their first tells the story of economic turmoil in America with two songs, “We’re in the Money” and “Hard Times Come Again No More.” This is a delightful pairing ending with Edmund showing off his maturing voice with an acapella climax. 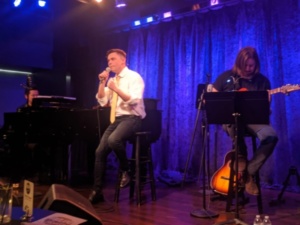 A fun medley of Disney songs keeps one guessing as he alternates between just playing the medley on his violin (“When You Wish Upon a Star”, “Beauty and the Beast”, et al) and singing the familiar lyrics (“Be Our Guest”, “Kiss the Girl”) ending with him singing “How Far I’ll Go” from Moana.

The most inventive mashup is the one he and Yasuhiko created to depict the wars and turbulence we’ve experienced in our history, especially relevant with what is happening in Ukraine today. I’ve seen many mashups over the years when one song warps into another, one or two times during the performance; but Yasuhiko has arranged so many interchanges between the two songs (the very different in tone “Boogie Woogie Bugle Boy of Company B” and “Bad Moon Rising”) that it is a wonder that Edmund can keep up, and he does.

Edmund’s playing the John Williams arrangement of the overture of Fiddler on the Roof brings even more power and emotion to the changes in tunes than when we watch the film as you now feel the music without the visuals of the film. After playing this he admits it’s his first time playing this in front of an audience and we hope not his last. Additionally, he debuted a lovely song he wrote, The Road, about his trips from Manhattan to his home upstate and to his waiting partner.

Edmund and Yasuhiko enjoy giving their audience a variety of music and even threw in a little Italian as he sings “Tu Vuo Fa L’Americano”, a fun number about how Italians think about Americans and their rock and roll and baseball.

Edmund has always been a gifted violinist as he demonstrates with another Copland song, Simple Gifts; but he has also developed into a mature singer as he begins the end of his show with “The Rose.” His closing song is an American classic that depicts the hope that Edmund gives us as we continue our recovery with “Happy Days Are Here Again.”

Edmund is charming and witty as shown by his encore which gives tribute to one of his two closest friends during the quarantine, his violin, as he sings “You’ve Got a Friend in Me”. His other “friend” during the quarantine made a surprise guest appearance just as Edmund was about to leave the stage on Sunday. Running onto the stage with a bouquet of flowers and getting down on one knee his partner proposed to him. Of course he said I do. A perfect ending to a wonderful evening of joy, hope and love.

Stephen SorokoffJanuary 6, 2023
Read More
Scroll for more
Tap
Go Inside Broadway By The Year: The New Wave
The Glorious Corner