Edward Albee’s At Home at the Zoo is Smart Theatre

Edward Albee’s At Home at the Zoo is Smart Theatre

“We should talk,” Ann says to Peter.

Edward Albee’s At Home at the Zoo, now playing at the Signature Theatre, is superbly acted and has so much to say. The evening consists of two plays, the 2004 Homelife and the 1958 play, The Zoo Story. Albee, wanting a companion piece for The Zoo Story, wrote Homelife and decided they should only be played in tandem. 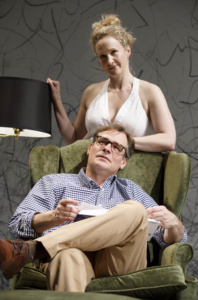 In Homelife, Peter (Robert Sean Leonard), an upper-class publishing executive, is constantly being interrupted by his wife Ann (Katie Finneran), as he is intently reading. He shares his home with Ann, their two daughters, two parakeets and two cats. She wants to talk, and even when they do, what is being said is not really what is lying underneath. Ann is bored with their sex life and wants to spice it up, but Peter is stuck in his rut and despite their problems, neither may ever get out. 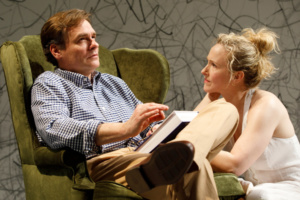 In The Zoo Story, Peter is back, still trying to read his book, now in Central Park. Suddenly, Jerry (Paul Sparks), a homeless man, wants to talk. Jerry, feeling isolated and disheartened, is desperate to have a meaningful conversation with another human being. He interrogates Peter, asking him how much he makes, forcing him to listen to stories about his life and the reasoning behind his visit to the zoo. In the end, Jerry brings his victim, Peter, down to his own savage level. 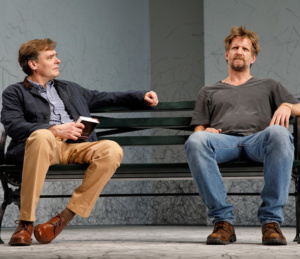 Leonard is perfect as Peter, measuring his delivery and not really in touch with himself or the world. In a world where people are concerned with day-to-day living, Peter is comfortable. In Act One, Finneran aches for something to break her out of her rut. She makes us search inside ourselves for breaking the status quo. Every emotion shows in her face and body. But it is Sparks who is thrilling. He is a caged animal ready to break free of his cage of poverty; he is unpredictable, and he is humanity on the verge of rebellion. 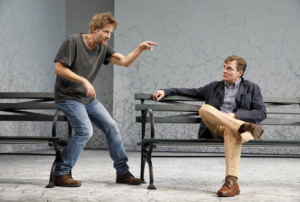 Lila Neugebauer directs this show with a conviction, making Albee’s statements about class straightforward. We see what it takes to set off a time bomb in humanity.

Set designer, Andrew Lieberman, keeps things simple. It looks as if humanity has gone at the walls with the gusto of a child enraged. The lighting by Japhy Weideman keeps it stark, forcing us to see everything in broad daylight. UnkleDave’s Fight-House work shines in the brutal realism played out by Leonard and Sparks.

“We should talk”, Albee says to an American public. So, we listen and pray that this conversation happens before it is too late.

Suzanna BowlingJanuary 24, 2023
Read More
Scroll for more
Tap
A Letter to Harvey Milk: The Musical – Signed, Sealed, But Undeliverable
An Ordinary Muslim Clearly States How Hated We Are