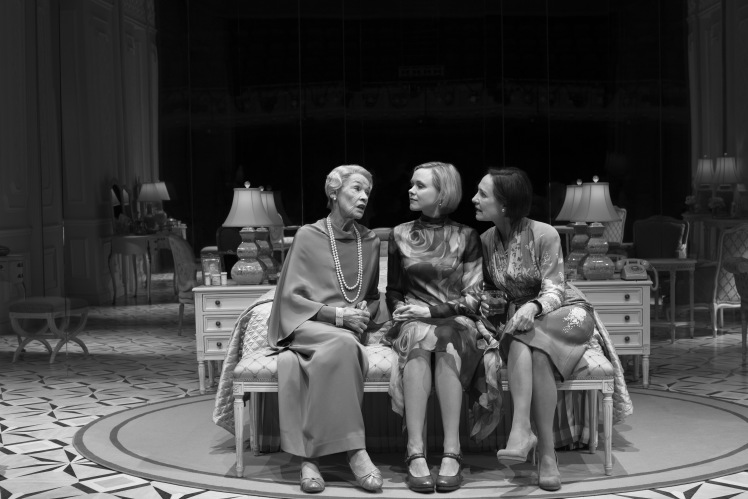 I saw this play years and years ago when it played at the Promenade Theatre. The play actually opened Off-Broadway for a limited run at the Vineyard Theatre on January 27, 1994, and closed on March 13, 1994. Directed by Lawrence Sacharow, the cast featured Jordan Baker (as “C”), Myra Carter (as “A”), Michael Rhodes (as the Boy), and Marian Seldes (as “B”). The production then moved to the other theatre, the one that I saw it in on April 13, 1994, where it ran for a good long run closing on August 26, 1995. During that run, Seldes assumed the role of “A,” with Joan Van Ark and Frances Conroy in the other two roles. It is said that it was magnificent, winning two Drama Desk Awards, two Outer Critic Circle Awards, and two Lucille Lortel Award for Best Actress and Best New Play.  It also won the Pulitzer Prize for Drama and an Obie Award for Best Performance. I’m guessing I loved it, but I really don’t remember the production all that much, only the after taste.  I can remember seeing it uptown on the west side so it had to be at the Promenade and not the downtown Vineyard, but the storyline has faded from my memory.  So I was particularly thrilled to have a chance to see this well-regarded play once again with a cast made in acting heaven.

This compelling play, performing on Broadway for the first time ever, which is sort of hard to believe, stars the phenomenal Glenda Jackson in the role of “A”, a powerhouse actress who just recently played the title role in Shakespeare’s King Lear, no less, at The Old Vic, winning both the London Evening Standard Award for Best Actress and the Critic’s Circle Award for Best Shakespearian Performance.  This legend, who has just recently returned to the stage after 23 years as an elected Member of Parliament is backed up by the magnificent Laurie Metcalf, returning to the Broadway stage after a pretty epic professional year, winning a Tony Award for playing Broadway in A Doll’s House, Part 2, getting an Academy Award nomination for ‘Lady Bird‘, and returning to television in the re-mounting of “Roseanne“, to play the role of “B”.  A sure fire Emmy nomination is waiting in the wings this coming fall, although I haven’t watched the new remount for obvious reasons that have nothing to do with Metcalf. The wonderful Alison Pill, a Tony Award nominee for Best Featured Actress in a Play for her Broadway debut in The Lieutenant of Inishmore, and nominated for a Lucille Lortel Award for both On the Mountain and the legendary off-broadway production of Blackbird, takes on the delicate role of “C”.  One couldn’t ask for a more celebrated collection of stage actresses to take on Edward Albee’s complex exorcism of his youth, the Three Tall Women, a play that seems solidly connected to his own troubling upbringing, when he was raised by conservative New England adoptive parents who disapproved of him being gay. Like the young man and son in the play, Albee left home at the young age of eighteen, but at one time admitted to The Economist that the writing wasn’t very cathartic, that “I didn’t end up any more fond of the woman after I finished it than when I started.”

The beautifully resurrected play, directed with perfection by Joe Mantello (Broadway’s The Humans, Blackbird) starts with the interactions of and with a complex and compelling older woman, struggling around her well-appointed room at the ripe old age of 90, arguing and engaging with a middle-aged caregivers (Metcalf) while being observed by a young lawyer (Pill) going over some papers.  The older woman reflects on her life, rambling on with aggressive frustration and enjoyment, floating in a mixture of shame, pleasure, regret, satisfaction, and memory loss. Metcalf’s facial expressions and body language deserve an award unto itself, telling us stories that go far beyond what is said.  She pulls us in with her attempts to be of help, to scold the young lawyer into having more patience, as she struggles to find the patience within herself.  She shrugs off disregard and runs when assistance is needed, all the while making us lean in as much as she does when the old woman reveals something new and exciting, like how she got one of her diamond bracelets.

Pill, in the first half, is given much less to play with, but does wonders with what she is given, but it is in the second half where her true effervescence exists.  She radiates all that resides inside a privileged 26-year-old woman who sees only good coming at her from all angles.  But it is Jackson who you can barely take your eyes off.  She is superb, ratcheting around herself, giving us dimensions of self that are epic and very telling of the woman she once was, and sometimes the way she sees herself still. She asks to be helped into bed, and in the middle of a sentence things start to warp into something quite different, and in the aftermath, we see just how powerful Jackson, the actress, truly is.  Through this other realm, this old woman recalls the joy and optimism of her childhood and her early marriage, before being forced to face up to the negative events that caused her pain, anger, and regret, namely her husband’s affairs and death, and the estrangement of her gay son. It is played out by all three with a level of interactive acknowledgement that is so finely tuned that the strings that hold these ladies together is as strong as wire, and as clear as day.

It’s a dynamic and fascinating journey, played out in the very beautifully decorated bedroom of the older woman, designed with such a wise slant of glass and mirror by Miriam Buether (MTC’s The Children), exacting lighting by Paul Gallo (Broadway’s A Bronx Tale), and sound design by Fitz Patton (Broadway’s Meteor Shower). Draped in perfect costumes by Ann Roth (Broadway’s Shuffle Along…), the three delve into areas both psychological and emotional, struggling to  comprehend each other’s motives and decisions. Aging and growing older, in the more abstract, is on display here, and so is the always approaching face of death. One character states with confidence that all children should be made “aware they’re dying from the moment they’re born.” And one can’t help but feel the weight of that idea as we watch Jackson retreat into arrogant complacency and fearful disorientation. From any vantage point, ours or theirs, that quality sits uncomfortably on all that view her, especially as we begin to see her through the three shades of maturity, youthful arrogance, middle-aged disregard and complacency, and  the struggle of the aged with encroaching senility on the horizon. That stance doesn’t change too much as we go from the first Act into the second, regardless of the restructuring. It’s a compelling piece of theory wrapped in sharp and very dark humor.  It’s not the prettiest of pictures, but it is a powerful lesson, one that sinks in and plays out in our heads endlessly. “And so it goes.” one might say, with the misty clarity of uncertainty as we walk out of the theatre at the end of this magnificent play.

Suzanna BowlingSeptember 22, 2021
Read More
Scroll for more
Tap
Mean Girls and SpongeBob SquarePants Dominate The Tony Nominations
Cody Buser and For A Life a Playwright and Play to Keep Your Eyes On