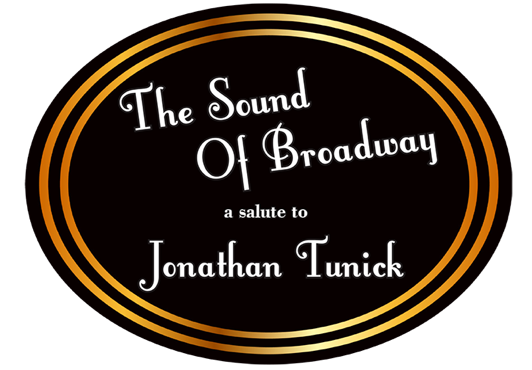 Conceived and directed by Alan M-L Wager and supported by a 27-piece orchestra with appearances by Broadway Guest Stars and Broadway Special Guests, the evening will lift off into Connecticut history at 8:00pm.

The multiple-award-winning Eric Stern will serve as Music Director and Conductor.

Mr. Tunick has orchestrated, re-orchestrated, or composed for nearly sixty musical stage shows, thirteen films and 24 television series.  THE SOUND OF BROADWAY will highlight from this overwhelming canon of genius.

There will be a Pre-Concert Cocktail Reception at 6:00pm.  The Post-Concert Champagne Celebration will immediately follow the event.

The Sharon Playhouse is located at 49 Amenia Road in Sharon, Connecticut where the salute to Mr. Tunick has completely sold out.

A native New Yorker, Jonathan Tunick grew up on Manhattan’s Upper West Side and attended the High School of Music and Art, Bard College (AB 1958) and Juilliard (MS 1960), where he majored in composition under Vittorio Giannini.

His first major credit as an orchestrator was Promises, Promises (1968), which led to a long series of Broadway musicals, notably those of Stephen Sondheim. (he has orchestrated nearly all of Sondheim’s musicals.) These include Company, Follies, A Little Night Music, A Chorus Line, Sweeney Todd, Nine, Into The Woods, Passion, The Color Purple, Road Show and A Gentleman’s Guide To Love And Murder, plus the recent revivals of Carousel and West Side Story. He is scheduled to begin work next month on the orchestrations for The Music Man, starring Hugh Jackman.

He has composed and conducted film scores for Mike Nichols (The Bird Cage), Franco Zeffirelli (Endless Love), and Sidney Lumet (Find Me Guilty),   as well as TV classics Murder, She Wrote, and Columbo. Other film work includes Blazing Saddles, Young Frankenstein, A Little Night Music, and The Fantasticks.

In recent years he has returned to serious composition, premiering his Trio for Clarinet, Cello and Piano, Cheever Countrysuite for orchestra and Serenade For Strings.

Previously holding the Emmy, Grammy and Academy Awards, in 1997, for Titanic, he was awarded the first Tony ever given for orchestration, elevating him to “EGOT” status; one of the very few persons to hold all four major awards.

In 2009 he was inducted into Broadway’s Theatre Hall of Fame.

He is married to Leigh Beery, a Tony-nominated singer and actress with a long and distinguished career on the musical stage. They divide their time between their West Side apartment and their home in the Connecticut Berkshires.

The Sharon Playhouse is a regional, non-profit theater producing high-quality performances with Broadway caliber actors as well as talented local community members.  Its mission is to entertain the community of Northwest Connecticut and beyond, while also serving as a teaching theater to encourage aspiring actors and other theatre professionals of all ages to develop their craft.

Robert Levinstein’s (Managing Director) knowledge of technical theater and finance, coupled with a creative eye offers a unique blend of business and art. As Associate Producer/Casting Director for the Ogunquit Playhouse in Maine, he managed all aspects of theatrical production, served as a conduit between various diverse departments, controlled and supervised a multi-million-dollar annual budget and cast of such luminaries as Stefanie Powers, Sally Struthers, Jefferson Mays, Carson Kressley, to name just a few. As a Producer/General Manager his productions included the Off-Broadway play Would You Still Love Me If… starring Kathleen Turner at New World Stages, the critically acclaimed Kick!, directed by Lynn Taylor-Corbett, It Is Done, a thriller set and performed in a bar (a critical success in New York…and award-winning in the Los Angeles transfer) along with the New York City premiere of The Spoon River Project, which played under the stars at the historic Green-Wood Cemetery in Brooklyn. As a Production Stage Manager, he has worked on Broadway (Waiting in The Wings with Lauren Bacall), National Tours (Camelot with Michael York), The Actor’s Fund, and television, including shows for NBC, TBS and network award shows.

Alan M-L Wager, Artistic Director brings over 30 years of experience working in theater, television, and film to the Sharon Playhouse. As a director, he has steered successful productions of Beauty and the Beast, Oklahoma!, Guys & Dolls, among others. As an actor, he’s appeared in leading roles ranging from Broadway, National Tours and regional theaters all over the United States. He is a sought-after vocal coach who has worked with performers such as Patrick Cassidy, Amy Peitz and Veanne Cox. Alan is also a musical theater composer. Concept recordings of his shows feature such gifted artists as Brent Barrett, Andrea Burns, Diana Canova, Meg Bussert, Elizabeth Loyacano and Glory Crampton. In 2011 Wager and Levinstein formed 22Q Entertainment which was represented in North Hollywood with an award-winning production of Always…Patsy Cline starring Sally Struthers, while back in New York City, the company produced the My Big Italian trilogy.