Eileen Atkins and Jonathan Pryce a Masterclass in Acting 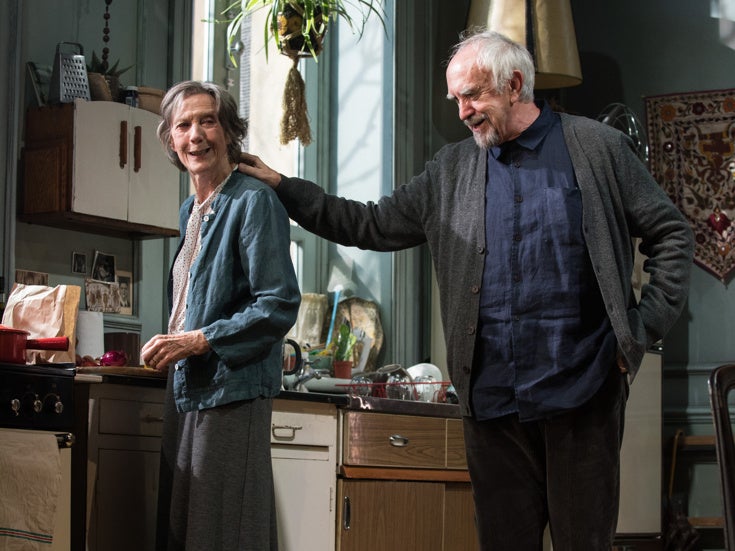 Eileen Atkins and Jonathan Pryce a Masterclass in Acting

In The Height of the Storm by French playwright Florian Zeller, translated into English by Christopher Hampton, who is dead, who is alive and what is really going on, will have you scratching your head. Neither the direction by Jonathan Kent or the lighting by Hugh Vanstrone, will give you clues. Instead they play with your brain and keep it as jumbled as André’s (Pryce).

The reason to see this contrived play is Jonathan Pryce and Eileen Atkins, who give a masterclass in acting. André has dementia and is haunted by his past secrets, but despite his flaws, he loves and can not live without his wife Madeline (Atkins), who has promised never to leave him.

At times the light that shines on Pryce and Atkins is turned off to give the illusion that one or the other or both, are no longer here. We know at least one has died, as flowers have arrived. The problem is the other character’s which include: their daughters Anne (Amanda Drew) and Elise (Lisa O’Hare); Elsie’s lover (James Hillier) and the Woman (Lucy Cohu) converse with both, making you wonder what is going on. The whole play is elusive, omitting the whole truth, until the last two scenes when Pryce and Atkins give us the heart and soul of the piece.

The surprises that could have happened are brushed over never giving us the whole picture. A woman is mentioned and then shows up. She appears to have had a long standing affair with André, as well as a son. Is this true? Did Madeleine know? Was she his neighbor or who? We never learn any of this.

We are told of a couple killed themselves eating poisonous mushrooms in a hotel room in Paris where they honeymooned. The reason was so that they could die with respect and dignity in their old age. If this had been André and Madeline and both were dead, the play would have seemed much more interesting.

The cast all gives outstanding performances, with Atkins and Pryce at the helm.

The set by Anthony Ward gives us the height and the feeling of a life slowly getting out of touch.

Zeller and translator Christopher Hampton brought us Frank Langella in The Father, where the father was André, and his daughters Anne and Elise appeared. The Father, was a much more cohesive and emotional play than The Height of the Storm.

It is always thrilling to watch superb acting and Atkins and Pryce give us that. The play however left me frustrated and singing “Forget your troubles come on get happy”, to get out of the depressing mood that was dumped on my lap.

RossSeptember 14, 2020
Read More
Scroll for more
Tap
Christopher Ashley, Cyndi Lauper and Bridget Carpenter Are Brought On Working Girl The Musical
Keep Your Eyes Out For The Talented Ann Kittredge