Einstein’s Dreams Where Time Is Everything 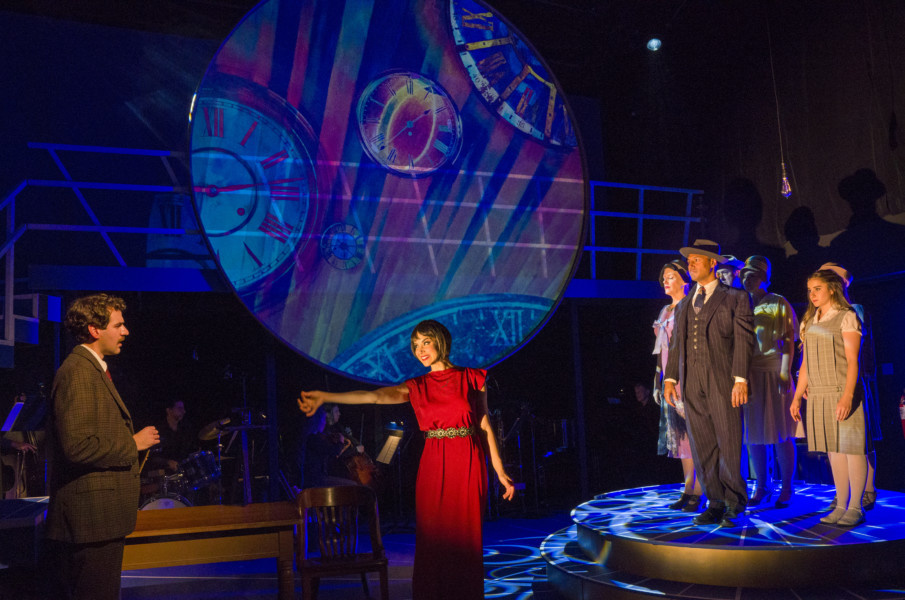 Einstein’s Dreams Where Time Is Everything

Einstein’s Dreams, with book and lyrics by Joanne Sydney Lessner, adapted by the book by Alan Lightman is one of the most interesting ideas for a musical I have seen in a long time. Albert Einstein, love and time is explored by Prospect Theatre Company at the 59E59 theatre’s. The problem is not all of it’s sums add up and it is disjointed especially by the avant guards movement by Dax Valdes.

Cara Reichel (The Hello Girls) keeps the show moving and endearing, but Joshua Rosenblum (music and lyrics) has no real since of time. This score should feel as if it is timeless. Instead it has a Klezmer sound, especially with the seven-piece band, led by Milton Granger, which dates it.

Einstein (Zal Owen) the German-born physicist is dreaming of Josette (Alexandra Silber), time and what will become the Theory of Relativity. he works as a patent clerk for a cold boss (the wonderful Michael McCoy). His best friend Michele Besso (Brennan Caldwell), also a physicist is worried about Einstein because he keeps falling asleep at work. Besso’s wife, Anna (Lisa Helmi Johanson) understands his language as does the pregnant, office typist, Marta (Tess Primack). However he feels nothing for his wife (the glorious voiced Primack as well). He is in love with Josette, who is time herself.

The middle-aged secretary, Hilda (Stacia Fernandez), a new employee, Schmetterling (Vishal Vaidya) and a young girl Josie (Talia Cosentino) make up the rest of the cast as Einstein goes in and out of the dreams, which happen while asleep at his desk.

Various conceptions of space happen as we move forward and backwards on the time continuum as the atom bomb and “The End of Time” are discussed.

Alexandra Silber, looks gorgeous in her red gowns and is a wonderful actress. Her high notes however, are strident and vibrato driven. The real vocalist here is Tess Primack. Zal Owen, lacks the charisma to hold a show and we never really root for him.

The lyrics don’t always do the job in moving the show forward and are not always the best choices in rhyme.

What is fabulous about this show is Isabel Mengyuan Le’s minimalistic set that allows the set allowing the blue and white swirl-patterned and huge clock dominate. David Bengali’s inventive projections, Herrick Goldman’s lighting and Sidney Shannon’s period costumes add to the exquisite visuals.

I hope that they work on this show because I loved the idea, but E did not = mc2.