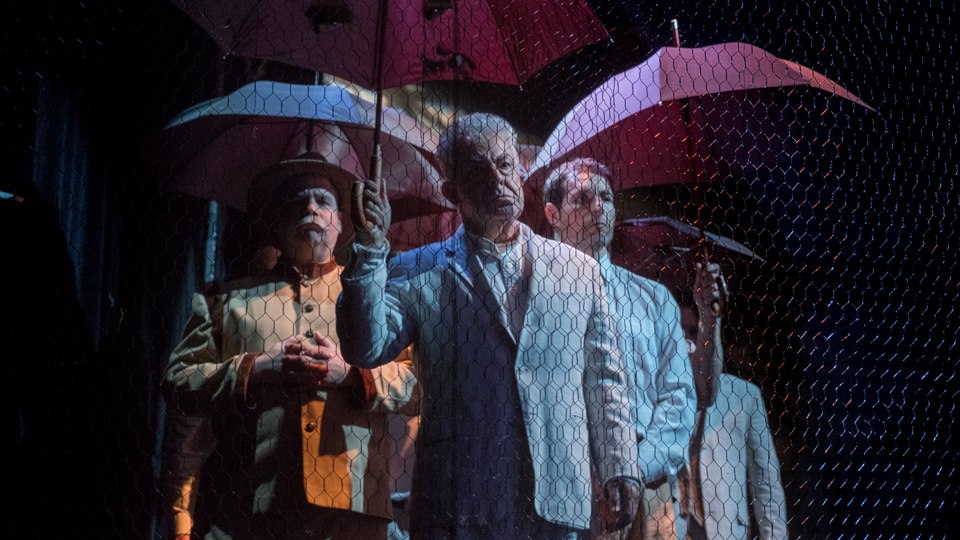 As with many of Gabriel Garcia Marquez’s stories, the plot of El Coronel No Tiene Quien le Escriba develops a situation that is both realistic and slightly bizarre. The Coronel (German Jaramillo) has been waiting for his army pension to come for the last 15 years. After the death of their only son, he and his wife (Zulema Clares) are destitute. Their medical problems are taken care of by the generosity of the doctor (Luis Carlos de la Lombana), and his pension won’t come soon, no thanks to his lawyer (Alfonso Rey). In order to survive and to pay for their necessary medical care, the Coronel turns to his son’s rooster (Horatius) to enter him into a cockfight. When the maintenance of the rooster becomes too costly, the colonel turns to his son’s friends for help, and even considers selling the rooster to Don Sabas (Mario Mattei), a local rich man.

What I love the most about this production, and indeed what I love about Gabriel Garcia Marquez’s stories, is its ability to entertain while drawing attention to the darker and less joyful aspects of our world. The story is a commentary on poverty and how people of wealth and power can affect those in poverty without ever being present.

From the opening stage picture to the final scene, El Coronel is a magical show. Raul Abrego’s scenic design recalls the dank of poverty with a grim cage like space that is brought to life by Manuel Da Silva’s somber lighting design and Jimmy Tanaka’s hopeful yet grounded original music and sound design. Under the vision of director Jorge Ali Triana, the whole production is grounded in reality yet imaginative and on the whole is captivating.

In simple linen costumes designed by Fernando Then, the actors portray vibrant, sensational characters that we all can relate to. German Jaramillo is delightful to watch. His interpretation of the good hearted and perhaps naïve El Coronel is joyful and bright. In high contrast, Zulema Clares creates the wife with more urgent emotions and heavier movement. The rest of the talented cast brings to life various stock characters – the doctor, the lawyer, the rich man, the crew of laborers – and their performances fall in sync with the tone of the show. The surprise of the whole performance is Horatius, the rooster who spends most of his time on stage. He is beautiful and so incredibly cooperative throughout the entire production.

For Performance Dates and Tickets click here. Subtitles are provided in Spanish and English.

Suzanna BowlingNovember 18, 2022
Read More
Scroll for more
Tap
Andrew Lloyd Webber I Prefer Writing For Dogs
A Letter to Harvey Milk Is a Long Time Coming, But Worth The Wait